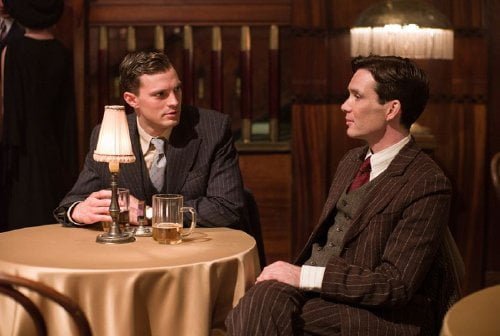 Reinhard Heydrich was the number three man in Nazi Germany with only Adolph Hitler and Heinrich Himmler wielding more power. He was the man behind the Final Solution and, as governor of Czechoslovakia, brought terror to the people of that country. In 1941, an assassination plot, originating in London, was launched to kill the murderous monster in Operation “Anthropoid.”

Sean Ellis directs (and co-wrote with Anthony Frewin) what is an accurately told true-life thriller that chronicles the harrowing story of the assassination of a man who personified evil. The film begins with seven English-trained Czech commandos parachuting into their enslaved country. Two, Josef Gabcik (Cillian Murphy) and Jan Kubis (Jamie Dornan), contact the underground and begin forming a tactical plan to kill Heydrich, which took nearly six months before finally being executed. Ellis and his team do a superb job in recreating events from start to finish, quite literally, with an obviously well-researched script by the director and co-writer Anthony Frewin. This is a niche film, audience-wise, that will attract WWII buffs and those interested in true life drama. All elements – acting, period production, the recreation of events - are given full attention by the filmmakers. The accuracy of the storytelling is also a plus.