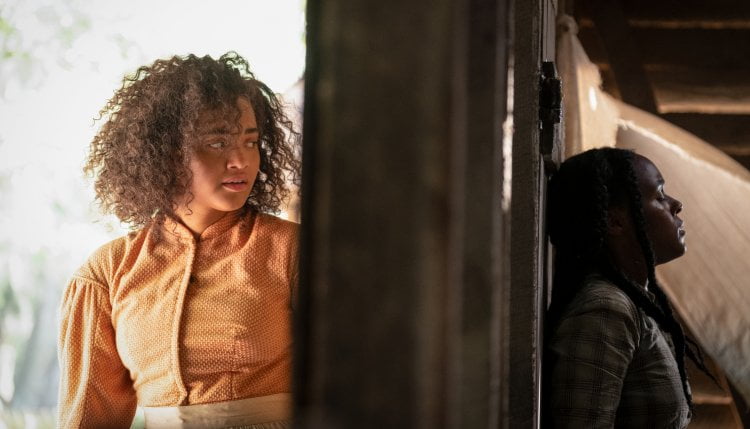 Veronica Henley (Janelle Monáe) is a highly respected academic on the television news and lecture circuit after publishing a book on how the disenfranchisement of Black people is written into the DNA of the USA.  But she’s been having some disturbing dreams in which she’s a slave named Eden sexually favored by her owner The General (Eric Lange, HBO's 'Perry Mason') that begin to cross over into her present when she takes a business trip to New Orleans in “Antebellum.”

This stylish looking horror film is a first time feature from writer/directors Gerard Bush and Christopher Renz, who perhaps have bitten off a bit more than they could chew their first time out of the gate.  They’ve done a bang up job with their cast and production, but a more seasoned screenwriter might have executed their concept better.  While everything comes together in the film’s third act, this is the type of film that suffers upon reflection.  Still, its depiction of slavery presents real, vivid horror and its relevance in today’s troubling times is undeniable.  “Antebellum” is no sentimentalized whitewash, a far cry from “Gone With the Wind,” made clear in an opening tracking shot that begins with an ‘idealized’ Southern plantation and ends far behind it on a functioning hot box.

We meet Veronica as the day dawns, a portrait of a crowned Black queen over the bed she shares with her husband Nick (Marque Richardson, "Dear White People").  Their adorable daughter Kennedi (London Boyce) bounces in and later, over breakfast and a.m. TV where mom’s just eviscerated an old white conservative in a segment, asks why ‘that man was so angry.’  Veronica calmly begins one of the many talks Black parents have to have to guide their children through white America.  But Veronica doesn’t stop to explain the racial microaggressions (‘that lipstick goes so well with your skin tone,’ ‘you’re so articulate’) that cause her to end a Skype interview with someone (Jena Malone, chewing scenery) she can’t be bothered to fully vet, dismissing her as another clueless white woman.

That same woman is in Eden’s world, the wife of Captain Jasper (Jack Huston, HBO's 'Boardwalk Empire') who cruelly taunts the slaves picking cotton while enforcing a rule of silence.  Tasked with cleaning out ‘the shed’ for talking back, Eden’s partner in crime, Eli (Tongayi Chirisa), breaks down, rending his clothes, when he finds the gold cross of a love one lying amidst the ashes and charred remains.  Meanwhile Eden is challenged by new arrival Julia (Kiersey Clemons, "Hearts Beat Loud"), a rebellious young woman chafing against Eden’s careful strategizing.

The filmmakers give us a lot of hints as to what is going on.  Note, for example, just where butterflies appear.  Parallels are continually drawn between the present and the past.  When Veronica’s old pal Dawn (Gabourey Sidibe, no blushing violet) makes it very clear that she knows why they’ve been given the worst table in a fancy restaurant, loudly correctly the matter, it may seem trivial compared to the rapes, beatings and worse of the past, but Bush and Renz illustrate how the mindset of the perpetrators is the same, illustrated today in the staunch support of Confederate monuments and backlash against Black presidents.  This is hard hitting stuff, or should I say would be, if it were not for the ludicrous reality they expose during their climax (then again, in today’s climate where scandal is enacted out in the open for all to see, maybe it is prescient instead).  It is this aspect, combined with earlier manifestations explained away as dreams of our ancestors, that sorely needed tightening, a singular throughline.

Monáe shoulders the film ably playing both the confident academic and cowed slave, her final vengeance set against a civil war battle breathtaking.  Mary Zophres ("La La Land") must have loved costuming Veronica, who always looks like she’s stepped out of a fashion shoot.The filmmakers are not subtle in their references, a shot of Eden and Julia on either side of a door cut to a Confederate Flag, somewhat nonsensical, the revelation of Veronica’s hotel room as the Jefferson Suite spot on.

“Antebellum” connects today’s systemic racism to our historical horrors with an idea that while uneven in conceptualization is often fastidiously realized by Monáe and the production team.