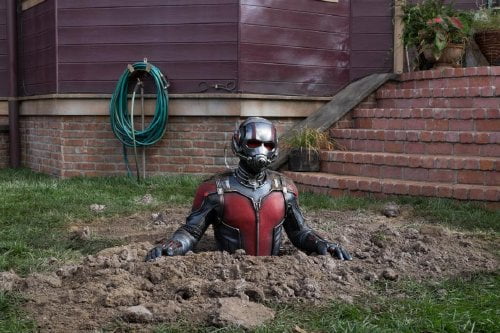 When Dr. Hank Pym (Michael Douglas) needs to steal something in order to save the world, he pinpoints Robin Hood-like master thief Scott Lang (Paul Rudd) as the man for the job. Lang will need to learn not only how to get ants to do his bidding with mind control, but how to operate Pym's suit that enables him to shrink in size while increasing in strength, turning the ex-con into "Ant-Man."

Here's an unusual jump into the Marvel universe - Hank Pym, the original Ant-Man and member of The Avengers is now a mentor training his successor to bring down another protégé, Darren Cross aka Yellowjacket (Corey Stoll, FX's 'The Strain'), the man who got him kicked out of Pym Industries to use the technology Pym grew wary of for nefarious, profitable goals. The latest Marvel outing is more obviously tied into the rest of its mythology than "Guardians of the Galaxy" was and while not quite as kooky is still a lot of fun. It's "The Incredible Shrinking Man" via "Them" crossed with "Toy Story" set in a super hero world. In a 1989 set prologue we witness Pym going head-to-head with father-of-Iron Man, Howard Stark ('Mad Men's John Slattery) and S.H.I.E.L.D's Mitchell Carson (Hal Hartley regular Martin Donovan). In the present, Lang's trying to go straight to regain visitation rights with his daughter Cassie ('Togetherness's' adorable Abby Ryder Fortson), but he can't even keep a job at a San Francisco Baskin Robbins when his past is uncovered, so he succumbs to the prodding of prison buddy Luis (Michael Peña, "End of Watch") for that infamous 'one last job.' Little do they know that the whole thing's an elaborate set up by Pym (who is also having father/daughter issues, Hope van Dyne (Evangeline Lilly), clandestinely helping out on the Lang project while still employed by Cross). After some humorous training that finds Lang negotiating his way from the bottom of a tub to the floor of a nightclub before bonding with four different kind of ants, each with special skills, he's sent to retrieve a device from an old Stark warehouse. Except now it's an Avengers outpost where Lang goes head to head with Falcon (Anthony Mackie). The big climax involves a Pym Industries break-in, Luis and his cohorts computer hacker Kurt (David Dastmalchian, "Prisoners") and surveillance van expert Dave (T.I., "ATL," "Get Hard") recruited for the perilous heist. Director Peyton Reed ("Down With Love," "The Break-Up") famously replaced Edgar Wright (the Cornetto trilogy), whose script with "Attack the Block's" Joe Cornish was given an update by Adam McKay ("Anchorman 2") and Rudd himself. He's done a good job wrangling special effects while dotting the film with humorous tidbits (Luis's van's horn plays La Cucaracha while he himself is given to whistling 'It's a Small World'). As usual in the Marvel world there is loss (Pym finally explains to his daughter that her mom was The Wasp, lost by going subatomic to stop a missile) and self sacrifice (Pym's revelation cues this film's climax). The film's ants are close enough to the real thing while being just cute enough to make one think twice before stepping on the next one. Reed's best set piece, though, is the latter half of his big climax which takes place in Cassie's room, Ant-Man and Yellowjacket battling it out atop her running Thomas the Tank Engine while an oversized ant is mistaken for a dog and Siri plays the Cure when she hears the word 'disintegrate.' Should you be so inclined, a post-credit bumper briefs us on a sequel. Everyman Rudd, sporting a new six-pack along with his aw shucks likability, fits right into this super hero suit. Douglas, Lilly and Stoll are fine, but its the trio of the underrated Peña along with Dastmalchian and T.I. that give the film its zip. As Lang's ex Maggie and her new policeman boyfriend Paxton, Judy Greer (“Dawn of the Planet of the Apes”) and Bobby Cannavale ("Blue Jasmine") don't have much to do, but their concluding mismatched family dynamic works because of them. Young Ryder Fortson gets a breakout role here and runs with it. Look for Ant-Man creator Stan Lee in a late breaking cameo. Grade: