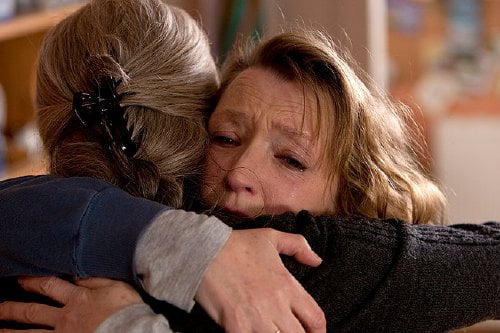 Tom (Jim Broadbent, "Harry Potter and the Half-Blood Prince") and Gerri (Ruth Sheen, "All or Nothing," "Vera Drake") are a happily married professional couple who spend most Sundays tending their community garden. Their upcoming retirement truly looks to be golden years, but the people who surround them - relatives, friends and colleagues - have little to look forward to in life but "Another Year."

Writer/director Mike Leigh ("Secrets & Lies," "Happy-Go-Lucky") returns with a number of his regular troupe well used to his improvisational style of filmmaking, but while his latest sports some fine acting, most notably from Broadbent and Sheen, the obvious metaphors and extremes of character occasionally take "Another Year" out of the realm of naturalism and into caricature. Establishing its garden/nurture theme, Leigh has broken his film into four seasons, beginning with Spring, usually associated with new life and renewal, but here beginning with a look into the abyss. Janet (Imelda Staunton, "Vera Drake," Harry Potter and the Deathly Hallows Pt. 1") sits in her doctor's (Michele Austin, "Secrets & Lies") office, the picture of misery, her face a mask of deadened tragedy. Tanya refers her patient to counselor Gerri and Janet actually goes, but all she can tell Gerri is that the only thing that will benefit her is an entirely new life. After work, Gerri has a drink with Mary (Lesley Manville, "All or Nothing," "Vera Drake"), the clinic's fluttery, high pitched secretary, whose wine stoked declaration of independence is clearly a cover for loneliness. Gerri is kindness personified, but even she is appalled with the Mary makes plays for her son Joe (Oliver Maltman, "Happy-Go-Lucky"). Then in 'Summer,' Tom's friend Ken (Peter Wight, "Pride & Prejudice," "Babel") arrives for a visit. Here's another wreck, a man who consumes a couple of bottles of wine, multiple beers and countless cigarettes while eating his dinner alone! Of course, Mary won't accept Gerri's attempts at matchmaking with this guy. In 'Autumn,' Mary's crushed when Joe brings home an age appropriate girlfriend (Karina Fernandez, "Happy-Go-Lucky's" flamenco teacher). She also worsens her situation by purchasing a car she cannot afford and hasn't a clue about. 'Winter' introduces Tom's brother Ronnie (David Bradley, "Harry Potter's" Argus Filch), a freshly widowed catatonic type who moves in for a transition period. Mary strikes again when Tom and Gerri are out tending their garden. I have heard over and over how Lesley Manville's pathetic Mary is like 'someone you know,' but I found her blatant desperation and age inappropriateness so over the top she only reminded me of Hyacinth's sister Rose in the British series 'Keeping Up Appearances.' Granted Rose is a comedic take based on the type of person Mary is, but Mary is that person to the nth degree. Manville is good in the role, but even a shred of self awareness would have made this character a lot more credible, like the eventual solemnity Hawkins brought to her ever optimistic Poppy in "Happy-Go-Lucky." On the other hand, with just two brief appearances in the first segment, Imelda Staunton, also an extreme case of unhappiness, cut me to the quick. Here is a woman I do recognize, one so downtrodden by life, mainly in the form of a man, that my heart broke for her. Staunton just shuts down like a concentration camp victim, a stiff-upper-lipper no longer begging for hope the way Manville's Mary does. Wight and Bradley also go as whole hog as Manville. But Sheen and Broadbent are terrific here, Broadbent making his Tom a blunt speaking type who tries to shock his friends into awareness, Sheen an earth mother with a subtle arms length approach. Sheen's firm rebuttal of her friend's imposition at the end of the film is commanding. Leigh leaves us by dialing down his sound as we stare into Mary's downturned face. The film establishes a broad circle of people in about a 1/2 dozen widely different locations with Tom and Gerri's home the hub. Costume designer Jacqueline Durran ("Happy-Go-Lucky") once again exhibits a true understanding of the characters she is dressing. "Another Year" is another solid entry in Mike Leigh's filmography - there is a desire to see what happens to these people - if only everyone orbiting Tom and Gerri weren't so beyond the(ir) pale.