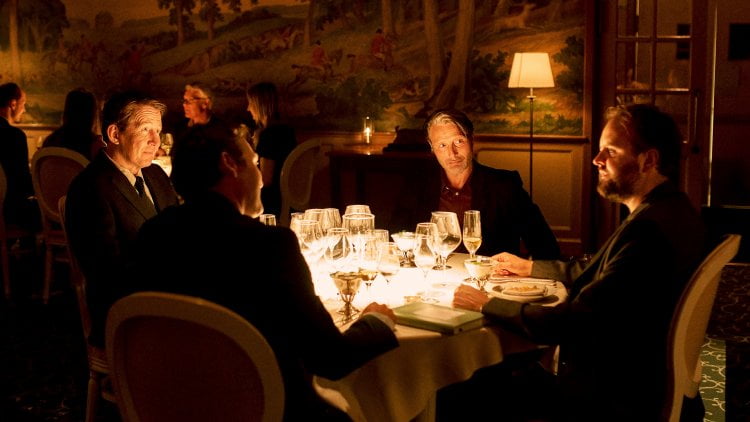 Danish history teacher Martin (Mads Mikkelsen) is in a middle-aged slump, feeling disconnected from Anika (Maria Bonnevie, "Insomnia"), the wife he adores, and given a vote of no confidence by a high school class readying for important exams.  Then Nikolaj (Magnus Millang) makes an unusual proposal during the 40th birthday celebration he’s sharing with Martin, Tommy (Thomas Bo Larsen, "The Hunt") and Peter (Lars Ranthe, "The Hunt") – that they experiment with Norwegian psychologist Finn Skårderud’s theory that humans are born with blood alcohol level deficit of 0.05% in “Another Round.”

Mikkelsen reteams with his “The Hunt” cowriter (with Tobias Lindholm)/director Thomas Vinterberg for this year’s unusual Danish submission for the International Feature Oscar.  Once again playing a teacher who’s set the rumor mill ablaze, this time around Mikkelsen is more part of an ensemble, his three fellow teachers and friends each having a different experience with controlled inebriation.

Vinterberg sets the stage for Denmark’s attitude towards alcohol with a high school beer running competition, a race around a lake while a case is consumed with demerits for ‘team vomiting.’  The school’s Rektor (Susse Wold) proposes a no alcohol policy during an administrative meeting but it goes nowhere.  As Anika once again slips away with vague plans for the evening, Martin picks up Tommy, the school’s widowed soccer coach, to join Nikolaj’s dinner where he drinks water as beer and champagne are served, but succumbs to the caviar course’s vodka.  Teary-eyed, Martin confesses his problems to his workmate buddies.

The foursome all begin their daily drinking regimens first thing in the morning (no drinking after 8 p.m. or on weekends) and amazingly, all four achieve immediate results, Martin’s class wholly reenergized by his more humorous, animated teaching approach.  Martin insists on a family canoeing vacation where he reconnects romantically with his wife.  Tommy’s least athletic charge, ‘Specs,’ gains confidence.  The group decides to push their BAC (blood alcohol content) up a notch to see if they can fly higher.

Vinterberg’s film uses a somewhat humorous concept to explore middle-aged malaise and while it is often funny, it is also profoundly anxiety-inducing.  Martin’s class may now adore him, but his reeling around the faculty lounge is one of many things fueling the rumor mill.  A janitor finds Tommy’s stash in a locked athletic store room.  Peter recommends Dutch courage to an insecure student before an important test.  Nikolaj’s wife Amalie (Helene Reingaard Neumann) is disgusted by his drunken antics, her husband now in competition with their young son in bed wetting.

The ensemble is tight, Mikkelsen, whose dance background is used beautifully for the film’s closing moments, ranging from melancholy introspection to radiance and hope.  Larsen is the film’s heart who will shatter ours, alone with his old dog Laban, brimming with compassion for everyone but himself.  Millang plays the ringleader like an impish Pied Piper while the other single, Ranthe, follows, open to new ideas while projecting the Everyman.

The production fleshes out these men’s lives beautifully, their homes reflecting their different status (watch for important small details, like groups of empty liquor bottles in kitchen corners).  The Copenhagen restaurant Lumskebugten, the friends’ ‘occasion’ place, makes quite the impression with its warm glow and hospitable service.

“Another Round” is an unusual film where alcohol is a springboard for much needed change but also produces some devastating effects.  ‘Everything in moderation’ is never stated, although its implications are obvious.

Four friends, all teachers at a local gymnasium in Copenhagen, discuss the theory of psychiatrist Finn Skarderud, who proposed that having a blood alcohol content of 0.05% makes you more calm, creative and enlightened. They decide to implement the theory for the enhancement of their teaching in an experiment that calls for "Another Round."

Basically, we have a movie that encourages the consumption of alcohol, by those tasked to educate and open the precious minds of our children, as a social experiment – which includes advising their students to drink before exams to "calm the mind."

This "experiment" by so-called qualified educators smacks of a bad idea from the very start. As the very odd story unfolds, the feeling about that bad idea only intensifies and with good cause. The original pact by the four called for maintaining the 0.05% BAC during the school day and no drinking after 8PM or on weekends.

At first, it really does seem to create calm and inspiration for each of them as they inspire their students to think and learn. If 0.05% BAC provides such positive results in their teaching skills, then more, say .10% or .20%, should be astounding. It is not.

The story, well played by the ensemble quartet, is a rise and fall story, as my gut told me early on, of bad decisions without professional guidance. The rise is light and breezy as each finds his inner self and exploits it. But, demon rum is called that for a reason and the steady, expected fall is harsh. I wanted to grab each guy by the collar and shake them. But, if I did that, we would not have a finished movie.

As an American who was exposed, since the 1970s, to the anger and militancy of Mothers Against Drunk Driving, the idea of the Skarderud experiment really rubs me the wrong way, for many reasons. But, I forgive director and co-writer Thomas Vinterberg (with co-scribe Tobias Lindholm) for making me uncomfortable because he does hit that button so well. And he has an exceptional cast led by Mads Mickelson.