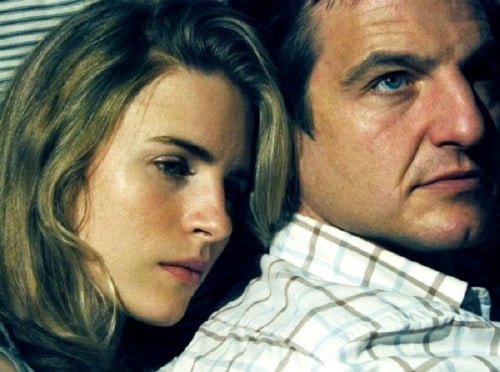 A new star appears in the night sky, so bright that no one can resist staring at it. Rhoda (Brit Marling, an ambitious high school graduate heading for a scholarship at MIT, is driving and watching the new night object when, tragically, she slams into a car at a stop sign. She spends four years in prison for her careless act and, in that time, the star turned out to be “Another Earth.”

At the age of seventeen, possibilities seemed limitless for Rhoda Williams (Brit Marling). She'd just been accepted into MIT and then heard the startling news that a planet much like ours had emerged from the far side of the sun. But that night, Rhoda was driving drunk and hit a family car head on, killing John Burroughs's (William Mapother, "In the Bedroom," TV's 'Lost') wife and son while she gazing up at the sky and "Another Earth." This Sundance hit, cowritten by its star and director/cinematographer/editor Mike Cahill ("Boxers and Ballerinas"), takes a tried and true concept - that of being able to right a wrong or relive one's life - and gooses it with the old sci-fi veneer of a parallel universe. But it's not the story per se that makes "Another Earth" so intriguing, it is the character study of Rhoda, and to a lesser degree John Burroughs, articulated in a breakout performance by the camera adoring Marling, capped off by a simply great, stark, multi-tentacled ending. Four years go by and Rhoda gets out of prison and returns to her New Jersey home. She puzzles a councilor by requesting a blue collar job cleaning her local high school. News of the 'mirror planet,' which is now sitting hugely in the sky, predominates. Rhoda visits the scene of her crime on Beach St., then looks up Burroughs and travels to his off-the-beaten-path antique home on 12 Russell Road. She offers its unkempt inhabitant a 'free trial cleaning' and proceeds to clean up a home in a suspended state of renovation. Burroughs drinks more than talks, but asks her to come back. Slowly they begin to become friends and he begins to live again. She tells him she's entered an essay contest for a trip to E2. When she wins, he makes a dinner to celebrate, but she needs to unburden her terrible secret. We see the main plot points of "Another Earth," beginning with that terrible car accident, coming from a million miles away and the film still takes its time arriving at them. It's in the details, though, that the film sparkles, like what Rhoda and John's homes tell us about them. The brilliant girl who wished to become a scientist comes from an average home with supportive parents (Flint Beverage and Jordan Baker) and a brother, Jeff (Robin Taylor, "Accepted"), whose slightly obnoxious behavior and celebrated acceptance into UConn underlines just how special Rhoda had been. Burroughs's house shows the promise of a once prominent academic career (he was a music professor at Yale) neglected in grief. Science, math and music are connected in John and Rhoda's conversations (just as her choice of janitorial profession symbolizes her penance, a cleansing of the soul). She tells him about the Russian cosmonaut who first went into space. He plays the saw for her, producing music as eerily beautiful as a theremin. The Williams family watch Dr. Joan Tallis (Diane Ciesla) of SETI on TV as she tries to communicate with E2 and discovers she is talking to someone by the name of Joan Tallis who shares her birthday. A man on the street wears a tinfoil hat. Rhoda's essay centers on her status as an ex-con, someone not usually given much in the way of opportunities, and her desire to reach for the stars, her life before and after merged together. Despite its low budget, Cahill achieves a strong sense of place with few locations. His thoughtful framing and lighting accentuate his characters - Rhoda standing at one of Burroughs's windows as dust mites dance in the light around her, Rhoda walking through the field towards his house centered and isolated but moving forward, the normalcy of John and Rhoda playing a WII boxing game in a situation anything but normal. The film does seem overextended, however, its ideas maybe better suited to a long short form than a feature. Brit Marling gives a luminous performance as Rhoda, thoughtful and pained but still hopeful. Mapother doesn't come into as clear a focus, although his gradual reconnection with life is intelligently done with no soggy sentiment. The two work well together in what is essentially a two person piece. Although we can guess how Rhoda will try to help heal John and assuage her own guilt, Marling and Cahill's final shot is a gift to Rhoda we do not expect and one which leads to many conjectures. It's cathartic by means of suggestion rather than spelling anything out, a lovely 'Oh!' moment and the filmmaking team who conjured it hold loads of promise.

When Rhoda earns her parole, she is older and wiser, taking a janitorial job instead of graduating college as planned four long years ago. She toils day to day, keeping her identity anonymous – she was convicted as a minor and her name is not attached to the deadly accident. All the while Earth 2 is drawing closer and closer and SETI attempts to contact the new world by radio as the whole world watches. The director of SETI, Dr. Joan Tallis (Diane Ciesla), hears her own voice coming from Earth 2. Pandemonium breaks out when the whole world learns that there is a doppelganger planet that mirrors our own Earth. Earth 2 is the sci-fi hook that draws you into Rhoda’s life but it is her search for redemption that is the meat of “Another Earth.” Rhoda investigates the aftermath of her accident where a wife and young son were killed. The father, composer-turned-recluse John Burroughs (William Mapother), has sunk into a depression where none of his past life matters anymore. Rhoda wants to see the man and pretends to be a maid offering a free house cleaning. Burroughs accepts and a subtle worker/boss relationship begins and Burroughs begins to live life again, thanks to Rhoda. This story of dual redemption is livened up by the event that is Earth 2. The thought that there is another you on another planet has intrigued science fiction writers for decades. Documentary maker Mike Cahill makes the leap to feature fiction films with a screenplay scribed by the director and his star Brit Marling. The result tweaked the sci-fi fan in me while telling a story about human tragedy and deliverance. Mike Cahill combines the two very different story threads and manages to keep them balanced. “Another Earth” is an intelligent debut feature film that handles its very different stories deftly. You have to forgive the liberties taken with physics – a planet so close to Earth would wreak catastrophic climate disruptions on Earth as the two planets’ gravitational pull draw them together. The sci-fi fan in me forgives the liberty of the authors. However, this is a metaphoric fiction not science fact that works on different levels.