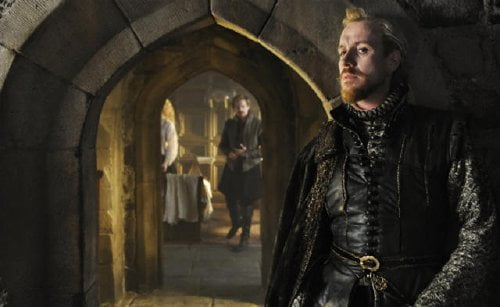 William Shakespeare is the most renowned, most performed playwright the world has ever seen. But, what if the famous Will was just a hack actor who took credit for the works of another? This is the world that director Roland Emmerich takes us into to reveal the true identity of author “Anonymous.”

Edward De Vere, the Earl of Oxford (Rhys Ifans, "Pirate Radio," "Greenberg") and former lover of Queen Elizabeth I (Vanessa Redgrave) was a gifted writer, but because of his aristocratic standing it was unseemly for him to publish them. After attending one of Ben Jonson's (Sebastian Armesto, "Bright Star") popular comedies, he called for the playwright and offered to pay him to front his works, but when 'Henry V' proved more popular than anything of its day, actor William Shakespeare (Rafe Spall, "One Day") leapt to the stage at the cries of 'Author! Author!' He continued to pose for De Vere whose authorship of 'Romeo and Juliet,' Twelfth Night,' 'Macbeth' and 'Richard III' remained "Anonymous." As the valedictorian of my high school class, it came as a bit of a shock to me when my senior English thesis questioning Shakespeare's authorship was returned graded a C+. Why was this? Was this the first truly average work I'd turned in at this school or did the nun who taught the class regard this as a trendy conspiracy theory not worth discussing? (Or maybe I had just been lazy...) Maybe that's one of the reasons I didn't respond to "Anonymous" but there are many others, beginning with screenwriter John Orloff's ("A Mighty Heart") failure to tie in much of his Elizabethan political backdrop into the plays or round out De Vere's motivation for writing something like "Romeo and Juliet" or "Twelfth Night." There's also the issue of ever shifting time periods with an actor playing the young De Vere (Jamie Campbell Bower) who bears absolutely no resemblance to Rhys Ifans outside of hair color. Still, this is a startling change of subject matter for Roland Emmerich, the director of such apocalyptic CGI-fests as "Independence Day" and "2012," and he's created a startlingly convincing 16th century world using the same techniques. Emmerich's Olde England is beautiful but not prettified, the Queen's teeth betraying the ravages of time. Also notable is Rhys Ifans giving his best performance to date as the conflicted rebel unaware of another huge secret in his own authorship. When De Vere's plays begin to be performed as Shakespeare's, Elizabeth is being pressured by her council William Cecil (David Thewlis, "Naked," "Harry Potter and the Deathly Hallows") to choose her successor as he plots to make her own son, the Earl of Essex (Sam Reid), appear as the leader of a traitorous uprising. De Vere, who was blackmailed into marrying Cecil's daughter Anne, also had a secret child with the Queen, the Earl of Southampton (Xavier Samuel, "Twilight: Eclipse"), whom he treats as a beloved protege. When William succeeds in promotes his own son, the hunchbacked Robert Cecil (Edward Hogg, "Brothers of the Head"), into the Queen's council, De Vere shoots back with 'Richard III,' one of the few direct links the filmmakers care to draw. Emmerich may have created a rich world, but his constant time shifts, especially given his huge cast of characters some aged by makeup while others are cast with different actors (Redgrave most successfully with her own daughter, Joely), can become confused and the filmmakers continually undermine their own movie with questionable choices. Redgrave the elder plays Elizabeth as still very much a young girl, one almost foolish in her behavior and Shakespeare himself is promoted as an egotistical boor given to blackmail to upgrade his newfound status. It's an odd mix of attempted, albeit contrived, veracity and comedic exaggeration. Derek Jacobi ("The King's Speech") acts to present and close the work from a present day stage, a nice device with which to anchor the tales surrounding the theater in the round, but other than Ifans' soulful, weathered performance all that's really notable is Emmerich's backdrops.

Director-producer Roland Emmerich has made a tidy franchise with his sci-fi successes, such as “Independence Day,” “2012” and “Godzilla” and bombastic historical thrillers – “The Patriot” and, now, “Anonymous.” (We will try to forget, entirely, “10,000B.C.”) I have never been a fan of the director so my expectations for “Anonymous” were not high. I cannot say I was pleasantly surprise – the story is muddled with frequent and often inexplicable flash backs, confusingly presenting most of the characters at different ages. I needed a score card to keep track of who is who at different periods in time. However, Rhys Ifans, as Edward De Vere, the Earl of Oxford and the titular character, is superb and gives the best performance of his career as the closeted playwright and poet who uses a beard, Benjamin Johnson (Sebastan Armesto), to shill his plays. The rest of the cast varies in impact to the story with David Thewlis and Edward Hogg faring best as the conniving father-son advisors to Queen Elizabeth I (Vanessa Redgrave). Redgrave is almost comical portraying the Virgin Queen as doddering on edge of dementia. Rafe Spall (son of Timothy) gives good sleaze as the cunning, uneducated actor Will S. who loves the fame of his imposture as a brilliant author. The other thing I appreciate about “Anonymous” is the out standing production. The behind the camera crew – production design, art direction costume design, cinematography and the rest – do a fine job in setting and maintaining the period feel. Too bad the story by John Orloff falls short of the production by muddling an intriguing concept.