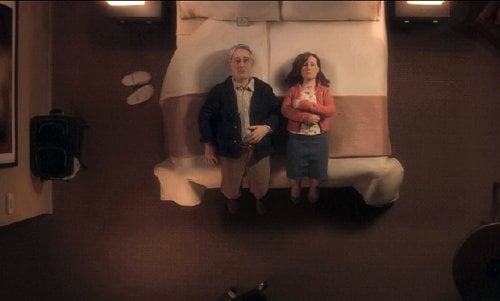 Michael Stone (David Thewlis) is a motivational speaker who published a book on customer support, How to Help You Help Them, and gives talks on the subject across the country. He is in Cincinnati for an overnight visit to give one of his speeches where he meets Lisa (Jennifer Jason Leigh), an insecure young woman, and he sees something special in “Anomalisa.”

On an overnight trip to Cincinnati to deliver a talk on customer service, Michael Stone (voice of David Thewlis, "Naked," Harry Potter's Remis Lupin), the author of 'How May I Help You Help Them?' checks into his hotel and looks up Bella, the woman he left behind there eleven years prior. Their meeting does not go well, but when Stone runs into two women who've come to hear his lecture, he's charmed by Lisa (voice of Jennifer Jason Leigh, "The Hateful Eight"), whose voice he finds 'miraculous.' She spends the night with him and when she notes how he taught her one of her favorite words, anomaly, he dubs her "Anomalisa." Codirectors Charlie Kaufman ("Synecdoche, New York"), who also adapted the screenplay from his own stage play, and Duke Johnson (Community's 'Abed's Uncontrollable Christmas') have made a stop motion animation like no other. From its opening overlapping dialogue over a black screen to a shot of the sky that pulls back through the window of an airplane to its uniquely crafted puppets that seem almost real despite the seams on their faces, "Anomalisa" takes us into the mind of a man losing his grip on reality via a deep-seated depression. If one was being flip, one could say "Anomalisa" was the portrait of a man driven mad by the customer service industry. Michael is picked up by an overly effusive cab driver (voice of Tom Noonan, "Manhunter," who provides the voice for every character other than Michael and Lisa), checked into the Fregoli by a solicitous reception agent, then taken to his room by a bellhop struggling to maintain pleasantries. Although they all follow the man's published advice, he's impatient with them all. Michael is anxious about his mental state, yet despite his seeming frustration with everyone he meets, he is desperate to make a connection. He calls Bella and finds an insecure woman flustered by his call. She agrees to meet him at the hotel bar, but the reunion quickly disintegrates when he suggests they would have more privacy in his room. Suffering from a panic attack, Michael begins knocking on doors in his hallway and eventually meets Emily and Lisa, two sales rep groupies who've traveled from Akron. Emily is the more conventionally pretty of the two and makes it quite obvious she's available, but after several rounds of drinks, it is Lisa whom Michael asks back for a nightcap. He is enchanted by everything about her - the scar on her face, her habit of reading with a dictionary, her rendition of 'Girls Just Want to Have Fun' (charmingly complete with Lauper's recorded rollout stylings) - despite her protestations that she is ugly and not very smart. A strange nightmare plunges him into a hotel basement conspiracy to keep her away from him and the next morning he tells her he will leave his wife for her. But over breakfast things begin to change, blossoming into a full meltdown during his lecture. "Anomalisa" is the type of movie that reveals more upon multiple viewings. You may not notice at first that all the puppets outside the central two look the same, varied only by hair and clothing. Of course they also sound similar, all voiced by Noonan, whose voice is the trigger to Stone's mental state. And yet despite the depression of the main character, "Anomalisa" isn't a downer at all. There are many visual jokes, mainly at the expense of Cincinnati's zoo and famed chili, and Lisa comes out of the experience with a newfound confidence. Michael's trip to Dino's 24 hour toy store to find a present for his son Henry results in an amusing yet thematic gift (Leigh's second, uncredited vocal?). There is also a puppet sex scene which is not only awkwardly realistic, but somehow soulful. Stay alert to all the details. All the 'extras' in scenes in airports, hotel lobbies and the hotel bar are meticulously animated. There is a black and white puppet recreation of "My Man Godfrey" playing on Michael's room TV. Costumes, props and sets are all not only true to life, but serve the story perfectly. Joe Passarelli's cinematography artfully employs zooms, closeups and lighting. Carter Burwell's ("Carol") score finds the hopeful beauty in the melancholy (he also composed the original song sung by Noonan over the closing credits, lyrics by Kaufman). "Anomalisa" is not only the best animation of 2015, it is one of the best movies of the year. Michael may be despairing over the drabness of everyday life, but his insertion into hers causes Lisa to discover her name in Japanese means 'goddess of heaven.' Grade: