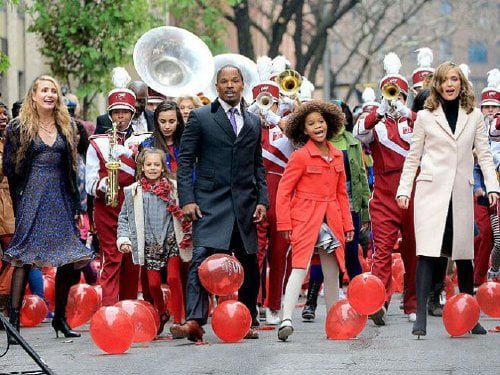 Stacks Mobile cell phone billionaire Will Stacks (Jamie Foxx) is having a hard time connecting with real folk as he campaigns for the New York City mayoral election, but he makes the front page when he saves a little girl from being hit by a van as she chases after a stray dog. His unscrupulous advisor Guy (Bobby Cannavale) finds out the 10 year-old is a foster kid from East Harlem and the misanthropic, germophobic Stacks is horrified when a PR luncheon snowballs into taking in "Annie."

Cowriter (with Aline Brosh McKenna, "The Devil Wears Prada")/director Will Gluck ("Easy A," "Friends with Benefits") starts with a nod to his source material, filling his screen with red-haired curly moppet Annie A., before his update's star, "Beasts of the Southern Wild's" Quvenzhané Wallis as Annie B., goes to the front of her class to give her interactive history report performance of an FDR bio with 'Stomp-like' percussion. But while he does little going forward to equate the Great Depression with the current widening financial gap, Gluck's whipped up a cute, frothy concoction for family holiday viewing. In one of the few new songs written for this second screen version, 'Opportunity,' Wallis proves more than capable of carrying a tune. Her Annie isn't orphaned, instead treasuring the note from her parents promising they'd return left at Domani's Italian Restaurant along with her four year-old self. She makes her way there every Friday, ever hopeful, but all she ever gets is a box of cannoli from a kindly waiter (Ray Iannicelli, "St. Vincent") at closing time. Home is a room shared with Tessie (Zoe Margaret Colletti, AMC's 'Rubicon'), Mia (Nicolette Pierini, "The Magic of Belle Isle"), Isabella (Eden Duncan-Smith) and Pepper (Amanda Troya) in the cramped apartment of the bitter, drunken Miss Hannigan (Cameron Diaz), a failed singer ('I could have been one of Hootie's Blowfish!') whose only interest in them is the $157 a week she gets for each. Annie's thrilled to upgrade to Stacks's World Trade Center penthouse, his lonely and lovelorn VP, Grace (Rose Byrne), doting and conspiring in all things fun and girly. A movie premiere (a fictional spoof on 'Twilight' starring Ashton Kushner and Mila Kunis directed by "The Lego Movies'" Phil Lord and Christopher Miller) turns into a treat for Annie's former roomies and the opportunity to get Will to let his hair down (even if that hair turns out to be fake in a nod to Daddy Warbucks' bald pate). A gala event at the Guggenheim finally finds Annie in her signature red, but also reveals her sad secret to her benefactor just as his advisor is cooking up his next dreadful PR stunt with Hannigan. Not all the musical numbers work, Diaz's "Little Girls" solo and "Easy Street" with Cannavale poorly choreographed. "Tomorrow" finds Wallis singing to her reflection in a street puddle and "It's a Hard Knock Life" is inventively staged in tight quarters. Byrne's dancing skills are questionable, but she and Wallis make an engaging team on a rooftop terrace. The new songs are, ironically, some of the best with 'The City's Yours' an intimate duet between Foxx and Wallis as they buzz above Manhattan in a helicopter. Costume is hit and miss, Wallis's updating on target, Byrne made too dowdy, perhaps to contrast her gala glamor. Gluck's adaptation is perhaps a bit too upbeat, Wallis always smiling until the film's climax. The young actress shouldn't be faulted though, optimism palpable, her self reliance believable. One could see this young girl capturing a city and a mogul's heart. Foxx's motivation for his workaholic misanthropy is questionable, but the actor creates an arc for his character nonetheless, his emotional breakthrough touching. Byrne usually shines in comedies and she's a great foil for Annie - if her juvenile neediness is awkward, this is a kid's movie after all. Supporting MVPs include Stephanie Kurtzuba in a breakout performance as an opportunistic Russian Family Services clerk, 'Dexter's' David Zayas as Lou, the convenience store clerk who sees beneath Hannigan's nastiness and Oz's Adewale Akinnuoye-Agbaje as Stacks's driver Nash. Diaz's Hannigan is more caricature than person, but she comes into her own with the character's self realization. Cannavale is a stock villain and none of the other foster kids makes much of an impression. The new Sandy is a cute, short-haired pup, named after the hurricane here (not all those updates work, like that Michael J. Fox/Jamie Foxx in joke few are likely to get). The film's been getting its share of advance drubbing, and I must admit it's been too long since I've seen John Huston's 1982 version, but if Diaz is no Carol Burnett, Wallis's updated Annie trumps Aileen Quinn's perky precocity. Gluck's musical may not be perfect, but it's got its heart in the right place. Grade: