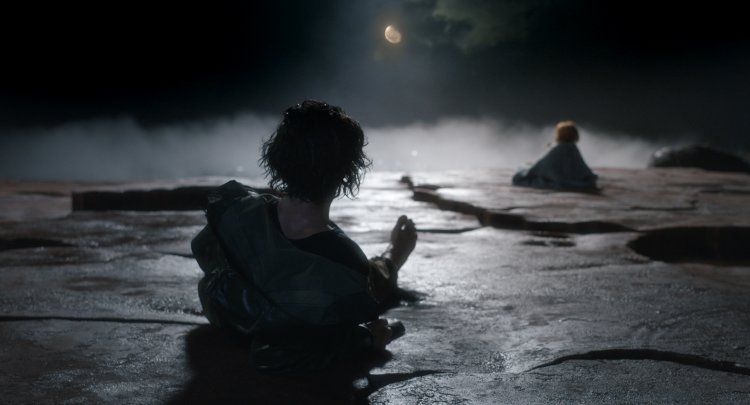 Henry McHenry (Adam Driver), his shoulder length hair parted and clipped on one side like a nerdy schoolgirl’s, prepares for his comedy show, ‘The Ape of God,’ by punching the air like a boxer, the illusion intensified by his hooded, green bathrobe.  He’ll take the stage like that, pacing the floor in a pair of old man style leather slippers like a caged animal, swinging his microphone aggressively in ever widening arcs.  His ‘comedy’ is angry and the crowd laps it up, but everyone will be shocked when he gets engaged to the petite and lovely opera star Ann Defrasnoux (Marion Cotillard) and becomes father to a little girl, “Annette.”

Writers Russell and Ron Mael, also known as the band too few have heard of, Sparks, recently feted by Edgar Wright in his documentary “The Sparks Brothers,” have tried several times to launch a film, most famously with Jacques Tati and Tim Burton.  Now they’ve teamed up with French director Leos Carax (“The Lovers on the Bridge,” “Holy Motors”), another singular artist, to produce one of the most out there musicals ever created.  While some will find it a fascinating watch, general movie audiences not up for an unusual challenge (for example, Annette is actually a puppet until the film’s last scene) may want to steer clear.

It definitely helps to either be familiar with Sparks or to have seen Wright’s documentary as Russ and Ron have a bit of a beauty and the beast thing going on, the younger Russ the ‘prettier’ front man to Ron’s backing keyboardist, the older brother often described as looking like Hitler.  Ron’s even addressed their differing appeal to the opposite sex in his song lyrics.  Considering that Adam Driver’s Henry begins with a long, beastly mane and ends with a bowl cut and pencil moustache while Ann is a pretty songbird, it’s not that difficult to see Ann and Henry as Russ and Ron Maels.

The film’s overt theatricality is introduced in a behind the scenes prologue, Carax asking his cast and musicians ‘May we start?’ from a control room.  Russ and Ron leave the sound booth and begin singing their first song, ‘May We Start,’ parading out into the street with their backup singers where they are joined by Driver, Cotillard and Helberg on a Santa Monica boulevard (this is Carax’s first English language film, but its settings are mostly stage bound, located in the imagination of movie land).

The man who tells his audience he became a comedian because ‘it was the only way I could tell the truth without being killed,’ drives off on his motorcycle after the show, arriving backstage at Ann’s opera for her climactic death scene.  She asks him how his show went.  ‘I killed them.  Destroyed them.’  ‘Good boy,’ she sings back.  He is agitated about her replications of dying for her audiences while she believes she’s saving them.  They croon ‘We Love Each Other So Much,’ the song transitioning into a sex scene which finds them still singing under the most unusual circumstances, sure to provide a chuckle.

Carax leans on the artificiality and theatricality, so when Annette arrives (in a musical scene where all attending physicians and nurses sing), it’s not that surprising that she turns out to be a puppet, one with rather large ears.  But her arrival coincides with a career slide for Henry, beginning when six women accuse him of abuse, something Ann sees on TV in the back of a limo.  He may sing of being a good father, but his drinking and smoking ramp up and on stage he ‘jokes’ about killing his wife and his audience finally revolts.

The second half of the film concentrates on the relationship among Henry, Ann’s accompanist The Conductor ('The Big Bang Theory's' Simon Helberg) and Annette, who produces an earthly singing voice after Henry turns on the celestial pattern lamp he’s bought her.  Although The Conductor reluctantly goes along, he believes Henry is exploiting his daughter when he books her on a world tour.  But Henry eventually faces the music himself, led by none other than Annette (Devyn McDowell in the film’s finale).

They may be costars, but “Annette” is Driver’s film, Cotillard little more than object here.  The actor lets his inner beast out of its cage, prowling around his stage seething, unafraid to paint his character repellent with just enough bad boy charisma to make his match believable – Henry does, after all, sing Ann’s praises even if he resents her more prestigious career.  His oversized performance is balanced by Helberg’s more naturalistic one.  Helberg, notching up his second major supporting role as accompanist to an Oscar winner (he played for Streep’s “Florence Foster Henderson”), acts with what is essentially a doll and gets major points for doing so not only with a straight face but moving us in the process.  Young McDowell amazes dueting with Driver to 'Sympathy for the Abyss' (her performance likely enhanced by the deft work of editor Nelly Quattier).  “Annette” is not the masterpiece Carax delivered last time out with “Holy Motors,” its oddities attributable to Sparks, but this unusual collaboration has produced something unique and while not for all, even most, tastes, those willing to embrace its weird world should have a ball with it.

Many years ago, I saw a film by Czech director Jan Svankmajer, which likely had animated meat as a character, and it gave me bad dreams. That happened every time I saw one of marionette-inspire films by that director, culminating in “Little Otik (2000),” a warped fairy tale about a childless couple who raise a log as a son. Watching Svankmajer movies makes me grind my teeth.

That is how I felt all the way through crazy-man Leo Carax’s bizarre musical fantasy, “Annette.” But, I digress. What I saw as I sat through the mad Frenchman’s latest work is a creative musical about the romance between a caustic stand-up LA comic, Henry (Adam Driver), and an internationally renowned opera singer, Ann (Marion Cotillard).
Then, baby Annette is born and within milliseconds I could see the “baby” is a marionette. My Svankmajer-phobia (that is a real medical term I just made up) kicked in and, for the rest of “Annette,” I was creeped out any time the titular character makes an appearance on the screen.

This is too bad for both me and “Annette.” For me, because anytime she was NOT on the screen, I found the “Umbrellas of Cherbourg” like story, much of the dialog is sung, to be an interesting and stylish tale of two people. It is an odd tale of a nuclear family that includes, obviously, Henry, Ann and Annette, But, Ann’s conductor, played by Simon Helberg, about half way through, takes on a prominent role as Annette’s protector and nanny. This is an unusual family saga, indeed.

Someone not traumatized by Svankmajer-phobia can judge the entirety of “Annette” much better than I. Still, Leo Carax and his teams in front of and behind the camera tell a fascinating story that is a genuine, weird fairytale.