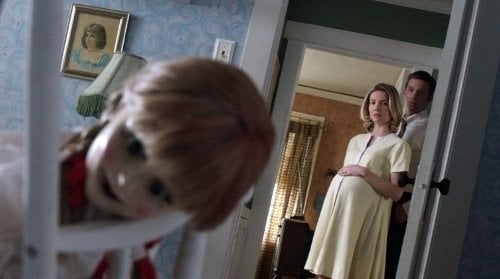 Imminently expecting her first child, Mia (Annabelle Wallis, TV's 'Pan Am') cautions her husband John (Ward Horton, TV's 'One Life to Live') about over sharing his joy with older neighbors Pete (Brian Howe, "Gran Torino") and Sharon Higgins (Kerry O'Malley, "Case 39"), who've 'lost' their daughter to a hippie cult in a time when the Manson Family crimes are all the news. But her best intentions take a demonic detour when she's targeted after a terrible tragedy befalls the Higgins at the hands of their daughter "Annabelle."

Talk about a cash grab. After the huge success of James Wan's old fashioned spooker "The Conjurer," which chronicled one of Amityville investigators Lorraine and Ed Warren's cases, it was inevitable that a franchise would bloom. But "Annabelle" is so low rent it's a pre-prequel, one which establishes the possessed doll known as Annabelle before it was owned by the folks who called the Warrens in, all the better for cutting the costs of a high caliber cast (the film was written by the creator of "Swamp Devil" and directed by "The Butterfly Effect 2's" John R. Leonetti, "The Conjuring's" director of photography). It doesn't help that the doll, conceptualized as it was in "The Conjuring," starts off looking like Chucky's demented cousin painted up like a demonic tart before it's even been made a vessel of the devil (the 'real' Annabelle locked in a case in the Warrens' occult museum is a Raggedy Ann). It defies belief that a man would buy this horror as a gift for his doll-collecting expectant wife. And yet she's not only thrilled, but gives it a place of honor in the new nursery, one whose shelves are crowded with dolls awaiting a child of unknown sex - good thing it turns out to be a girl. After the trauma of Annabelle's attack, Mia is prescribed bed rest to complete her term and of course hubby has to leave on a business trip so the fun can begin. They've kept the doll, unaware of the drop of Annabelle's blood which seeped in behind its eye, and as soon as Mia is alone the doll begins to torment her, beginning with the Jiffy Pop that's been left on the stove. Once the baby's born (and seems to grow at an astonishing rate), John goes on a night shift, the better for mother and child to be further terrorized. Dauberman's script borrows heavily from "Rosemary's Baby," with Alfre Woodard's Evelyn in the Maurice Evans role as the friend who steers Mia towards books on the occult (there is also suicide by leaping out a window, the doctor who blames Mia's pregnancy for her anxiety and an ominous baby carriage), with dollops of "The Amityville Horror" in the priest, Father Perez (Tony Amendola, "The Legend of Zorro"), who tries to help. The film isn't entirely without scares. A basement storage sequence further complicated by an elevator which refuses to leave is truly frightening, the demon unleashed a horrific vision of movement and makeup. Joseph Bishara's score is often overbearing, but designed to jangle the nerves. But "Annabelle" has little of the restraint that made "The Conjuring" effective, instead relying too often on loud noises and sudden movements to make people jump and characters who pave the way for evil's easy entry. This is an odd sidestep of a sequel, wrapping with intimations of an "Annabelle 2." But should the Warrens return, it's difficult to believe Farmiga and Wilson would want to follow in this film's footsteps.