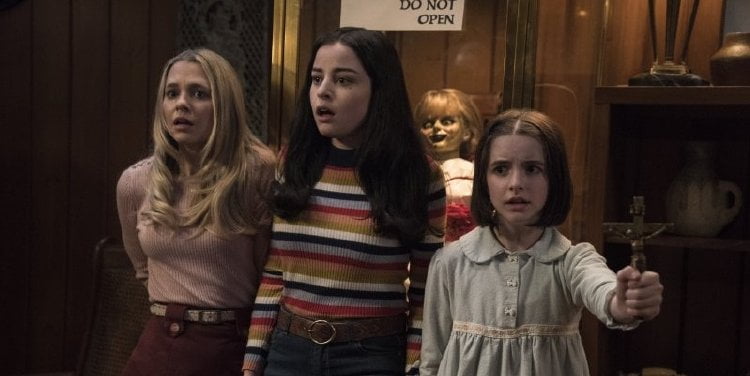 Shortly after investigating the haunting of the Perron family's Harrisville, Rhode Island house in 1971, self proclaimed paranormal investigators Ed (Patrick Wilson) and Lorraine Warren (Vera Farmiga) begin to get press, much of it skeptical. Their ten year-old daughter Judy (Mckenna Grace) absorbs the brunt of its impact, mocked by classmates at St. Thomas Catholic School, invites to her birthday party ignored. When the Warrens leave for an overnight trip, Judy's happy to reunite with babysitter Mary Ellen (Madison Iseman), but Mary Ellen's friend Daniela (Katie Sarife), suffering emotional guilt over the car accident that killed her father, is determined to search the Warren's off limits artifacts room to find a way to reconnect in "Annabelle Comes Home."

Gary Dauberman, who wrote both prior "Annabelle" films (and this one along with "The Conjuring's James Wan) makes his directorial debut with the film that reunites the doll with the couple who made her famous. This one is better than the prior two, largely due to Dauberman's ensemble, but it also devolves into an everything-but-the-kitchen-sink stew intended as a launching pad for more of these "Conjuring" movies. And while prior films involving Farmiga and Wilson have at least featured their actual cases, this one has clearly been conjured from its writers' imaginations. There is one exception. The film has a prologue which features the Warrens taking Annabelle from the two nurses who had been terrorized by the doll. As they drive home, the doll propped in their back seat (and not the trunk where any sane person would put the demonic looking thing), they encounter an accident, then stall out on a desolate stretch of road. Lorraine sees the little girl killed in the accident sitting with the doll while Ed is thrown into the path of an oncoming truck. This scene was based on a story related to the Warrens by the priest who blessed their artifact room on a weekly basis, his purported experience, not theirs. A year after Annabelle's been ensconced in the artifact room locked behind 'chapel glass' and declared a 'beacon for other spirits' as well as the most malevolent object in the room, Judy's beginning to experience the same type of visions that haunt her mom, namely a deceased priest hanging around her school. Judy keeps her problems to herself, but she's got a staunch ally in Mary Ellen, who heads to Palmeri Market after school to buy a cake mix to ensure Judy's birthday is celebrated (as well as to flirt with the son of the owner, checkout boy Bob (Michael Cimino), who will figure in later action). Mary Ellen's best intentions are overpowered by Daniela, who shows up with a gift of roller skates, the better to get Judy and her friend out of the house so she can snoop. And of course she finds the keys to that locked artifact room on Ed's desk (behind a framed portrait of Jesus). After touring around a bit, past the Samurai armor, music box and wind-up accordion monkey, she asks for a sign. When Annabelle pitches over in her chair, Daniela opens the cabinet marked 'Positively Do Not Open,' then rushes out, leaving the case unlocked, when the smoke alarm signals the ruin of the birthday cake she was left to watch. That 'beacon for other spirits' gets busy, not only showing up all over the house to terrorize Judy, but setting off a murderous bride, a werewolf and corpses created by the Ferryman. Bob, whose nickname 'Bob’s got balls' is a genuinely amusing running joke, shows up to serenade Mary Ellen just in time to run into some escaping horrors. Dauberman's much better at setting up his playing field than in unleashing the action, which often seems disconnected and random. At one point, Judy's watching TV all alone for no reason other than to unleash a jump scare, which this film revels in. At another, she ventures outside to get Mary Ellen's inhaler, because of course an asthma sufferer would keep this locked in her glove compartment. Don't even get me started on the haunted Milton Bradley Feeley Meeley game. At least Grace, Iseman and Sarife make us care about their characters, Sarife selling the film's most effective scene involving an old TV. While Dauberman manages some amount of tension, aided by Joseph Bishara's squeaking-porch-glider score, there are also no real consequences to anything that happens. The adult Warrens return to make everything better, Lorraine sensing Daniela's pain through a Victorian mourning bracelet from her collection, Ed pulling out the old guitar for a birthday singalong. The most dispiriting thing about "Annabelle Comes Home" is that nothing the doll unleashes from its infamous artifact room raises enough interest for its own spinoff. Grade: