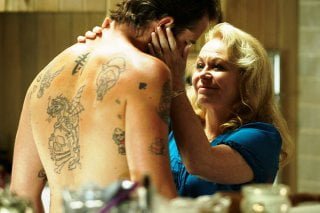 Joshua 'J' Cody (James Frecheville in his debut!) is a naive seventeen year-old living with his mother in Melbourne. When she dies of a heroin overdose, he calls the only person he can think of - his maternal grandmother Janine (Jacki Weaver, "Picnic at Hanging Rock"), known as Smurf, whom he hasn't seen in years. She's the lioness who guards the den where her criminal cubs operate, but her eldest, Pope (Ben Mendelsohn, "Australia," "Knowing"), is in hiding from the cops who want him dead. Is it a coincidence that J will be the first to see his uncle emerging from the shadows in Smurf's kitchen? J quickly finds himself a challenge to the alpha male in an "Animal Kingdom."

Writer/director David Michôd gives non-Aussies a look at Melbourne they'd never see otherwise, a place with a criminal underworld where the crap shoot of birth means the difference between a normal or violent existence. Michôd's perfectly titled screenplay is ingeniously structured, using J as both the audience's POV with his 'there but for the grace of God' situation and as the metaphorical challenger within the pack. His and Jacki Weaver's criminal matriarch is the most chilling since Billie Whitelaw in 1990's "The Krays." The family J first meets almost has merits. His twinkly blond grandmother may still seem hot to trot, but her family is her whole world and she dotes on them. Without Pope around, his partner Baz Brown (Joel Edgerton, "The Square") becomes something of a father figure, teaching J to wash his hands in the restroom, worldly enough to realize he has to legitimize his life or face extinction. Middle Cody son Craig (Sullivan Stapleton, "December Boys") is a fun loving sort and the Codys's big money maker being into today's scene, pushing drugs with the inside help of Det. Randall Roache (Justin Rosniak). The youngest, Darren (Luke Ford, "The Mummy: Tomb of the Dragon Emperor"), is much like J except for his preconditioned acceptance of unlawful behavior, fond long ago memories of having thrown rocks at cars with his almost contemporaneous nephew a subtle first alarm. But in their attempt to remove Pope's old-fashioned armed robbery ilk from their slate, Melbourne's finest ironically take the man who could have had the best influence on those remaining and when J agrees to steal a car at his uncle Pope's behest he does not know it will become the vehicle of Pope's revenge, evidence in a most heinous crime. Detective Nathan Leckie (Guy Pearce, "The Proposition," "The Road") sees something in J when the lad gives his statement and offers the boy safe harbor, but not even Leckie realizes how tenuous his own lifestyle is and J has to be nimble if he's to survive. And its with these twists and turns that Michôd's film raises itself above the pack. The filmmakers auditioned 500 actors and amateurs to find their J and hit pay dirt with the untested Frecheville. The seventeen year-old makes an astute first impression as a bit of a mouth breather, an unsophisticated boy who needs to be led around by the hand, but when cornered, his animal instincts suddenly evince latent street smarts. It's a terrific performance and the script hinges on his ability to play duplicitous. "Animal Kingdom" is an exciting crime film up until J goes into protection, then steps up a notch. Jacki Weaver helps the film achieve its tone of family camaraderie resting upon rot. When Pope returns to the nest, she sits on his lap, the former mother and son hugginess turned incestuous. Her open expression glazes over ever so slightly as she sentences one family member to death to protect another. If Edgerton projects evolution, Mendelsohn is the Cro-Magnon, a brute whose very presence sparks the air with edge. J's girlfriend Nicky (Laura Wheelwright) is welcomed into the fold, but Pope leers suggestively over her in her sleep, foretelling doom. Stapleton achieves poignancy when he realizes his number may be up and Ford a horrified impotence, the path J could have, but does not, take. Michôd's pacing is terrific, the gunned up speed of the crime genre occasionally slowing to develop character and lull the audience into a false sense of security. Every time we think "Animal Kingdom" is settling into a typical film of its genre, the director pulls the rug out from under us. This 2010 Sundance Grand Jury World Cinema prize winner is a knockout.