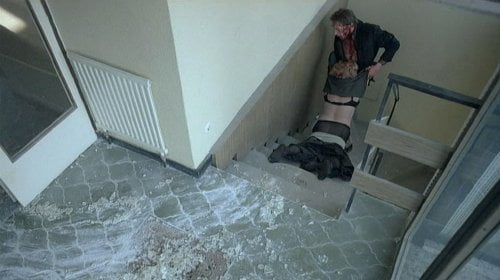 A man (Erwin Leder, "Das Boot") sits in a prison cell discussing the shock in his mother's eyes when he stabbed her. She survived while he did four years prison time. Now he's being released for serving ten more for the random killing of a 70 year-old woman and he's already making plans. The two lovelies (Claudia Schinko und Beate Jurkowitsch) in a cafe are tempting but impractical, his female taxi driver's (Renate Kastelik) too alert, but the remote home he stumbles onto after emerging from a forest will be the setting for "Angst."