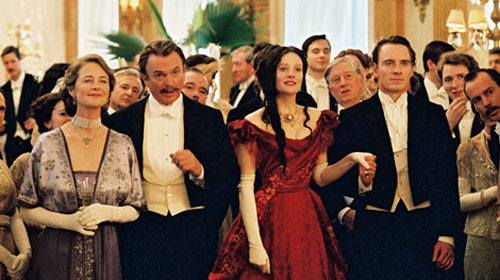 Angel Deverell (Romola Garai) is a precocious, very confident teenaged girl who thinks she deserves more than her lowly home living with her grocer mother (Jacqueline Tong). Convinced that she is destined for greatness, she submits her first novel for publication and, sure enough, it is. This event sets Angel on a journey where her life will transcend that of her wildest literary imagination in “Angel.”

I had an I-guess-I-gotta-see-this attitude when I knew that I would be the one reviewing “Angel.” I figured it another period chick flick about the rise and fall of a brilliant, young woman who must fight the male-dominated world to win her dreams. I was not thinking that “Angel” is the work of French helmer Francois Ozon who brought great humor and wit to the likes of “8 Women” and “Swimming Pool.” He delivers this same wittiness as we watch brash young Angel, matter of fact, declares her disdain for her working class background and certainty that she is destined for fame, success and fortune. Her arrogance proves founded when publisher Theo (Sam Neill) agrees to publish her very first novel. Things are on the fast track, initially, for Angel and she becomes famous across Great Britain with her, for the time, trashy novels. Her fame brings the success and fortune she craved and her rise in society introduces two people who will change her life. Nora Howe-Nevinson (Lucy Russell), is the daughter of a poor nobleman and Angel’s biggest fan. She almost begs Angel to hire her as her secretary so she can be closer to her favorite author. At the time the two women meet, Angel is introduced to Nora’s brother, Esme (Michael Fassbender), a bohemian artist who shows contempt for Angel’s crass tastes and manners. She, of course, falls in love with rebellious Esme. “Angel” is based on the Elizabeth Taylor (no, not that Elizabeth Taylor) novel and takes place just after the turn of the 20th Century when the world was on the verge of tremendous social upheaval, including the Great War. Angel’s idyllic life takes a major hit when Esme, suddenly patriotic, heads off to fight in the Boche. The good life is beginning to sour for Angel and she becomes one of her own tragic characters as her marriage falls apart. Things devolve tragically. What sounds like high drama is layered with satire and ironic humor making Angel less the chick flick than I expected. Ramola Garai, as Angel, chews scenery from start to finish as each episode of her life impacts her in different, often tragic, ways. I would not have Garai on the long list of best female actors but she embraces the role and has some fun along the way. The rest of the cast fills in the background well. Techs are excellent across the board with its great period production.