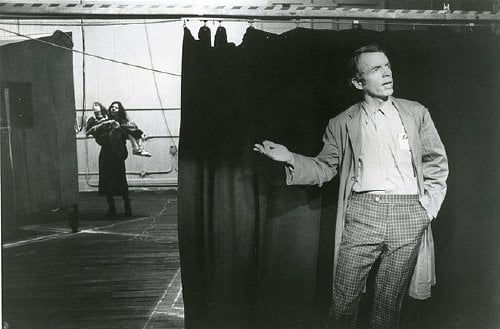 Spalding Gray made the art of monologue and the one-man performance his own ever since his 1987 “Swimming to Cambodia” brought him to the limelight. He died, tragically, in 2004 at the age of 62. Filmmaker Steven Soderbergh pays tribute to the brilliant artist, showing excerpts from his stage shows, interviews and the man’s personal analysis of his life in “And Everything Is Going Fine.”

Spalding Gray was an actor who became more famous for telling his life story on stage beginning with 'Sex and Death Til the Age Fourteen' and climaxing with his account of filming "The Killing Fields," 'Swimming to Cambodia.' After years of struggling with a dysfunctional childhood and depression, the family heirloom, Gray committed suicide in 2004. His friend and former director ("King of the Hill") and collaborator ("Gray's Anatomy"), Steven Soderbergh ("Erin Brockovich," "The Informant!"), has made a tribute to the man by cobbling together former performances and interviews in a linear fashion which reveals the artist's heart in "And Everything Is Going Fine." Spalding Gray was a brilliant monologist, one who commented upon the extremities of his life with distanced wit, but Soderbergh has put together a portrait which shows many facets of his friend, including the one who was deeply troubled by a cold, disturbed mother and the one who showed his aging father affection while asking probing questions. The technical quality of the film is dictated by its source material, which includes some pretty old videotape, and by Soderbergh's expert construction marred only by too many notable, if perhaps unavoidable, jump cuts. What the director does best is move back and forth between funny stage anecdotes, like Gray describing how he'd fall asleep to his older brother's series of questions to their mom about how really dead being dead meant, to deadly serious discussion of the stories's underpinnings, a Christian Scientist mother who would observe her own child's third degree burn analytically from across a room. There are other things we learn about Gray watching Soderbergh's loving portrayal, such as how he held onto his New England accent even after decades as a New Yorker and how his right canine resembled a vampire's fang. Soderbergh slyly slips in some onstage references to himself, all praiseworthy of course, but quickly turns the focus back to his subject, a man who could make theater about telling tales of his experiences in theater. In the end, we've walked down a long road with Gray, from his childhood, through two marriages and children of his own, and it is both sad and delightful to be reminded just how complex, wise, troubled and funny a man he was.

Spalding Rockwell Gray is familiar, at least in face, as a character actor best know for playing the US Consul in the 1985 Academy Award-winning film, “The Killing Fields.” However, for anyone who has seen Gray do one of his one-man monologues, like the above-mentioned “Swimming…” and “Monster in the Box,” this is where the man’s genius lay. Gray had the ability to keep you riveted as he tells the story of his life, the laughs and the sorrows, but always with a wry edge. Steven Soderbergh’s homage to a brilliant, troubled man who used his monologues as therapy for a life that saw him lose his mother to suicide and receive severe injuries in a car crash while in Ireland, causing brain damage. Gray tells his stories in a minimalist way, on stage with a table and chair, a glass of water, a spiral notebook and a microphone. He starts off his monologues slowly, letting the viewer settle down and be intelligently entertained by the articulate, amusing and neurotic Spalding. The world lost a brilliant entertainer in 2004 when Gray disappeared, to be found later floating in New York’s East River. When he was on stage, alone, there was magic in his words. Soderburgh captures this magic with a grace and ease that the director is known for. No stone is left unturned with the copious interviews assembled over the year interspersed with the one-man shows. This is a heart-felt documentary that needs to be seen.