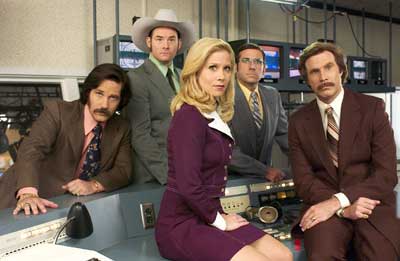 Veronica Corningstone (Christina Applegate, "The Sweetest Thing") arrives in San Diego dreaming of becoming an anchorperson, but it is the 1970s and that trail has not yet been blazed. Popular Ron Burgandy (Will Ferrell, "Elf") and his news team are quick to remind station manager Ed Harken (Fred Willard, "A Mighty Wind") that there is a reason it's called "AnchorMAN."

Ferrell's been on a roll with his movie-making support in last year's "Old School" followed by the sweetly hilarious starring turn in "Elf," but this long-in-the-works project represents two steps backwards. Written with SNL alumnus Adam McKay, who makes his directorial debut here, Ferrell's latest is juvenile comedy of the "I know you are, but what am I" ilk without the ironically twisted delivery of PeeWee Herman's man-child. When Ferrell's opening credit roll news desk shenanigans fail to elicit many laughs, things begin to look worrisome. The establishment of Burgandy's team and lifestyle offers initial promise. Brick (Steve Carell, great in the same job for "Bruce Almighty") is an aptly named weatherman while Champ (David Koechner, "A Guy Thing") is the sports reporter with an overly strong bond for his anchor. Best is Paul Rudd (recently seen as Phoebe's husband in TV's "Friends") as Brian Fantana, a Geraldo Riviera-like field reporter with an arsenal of female attracting colognes. These guys' lives are one giant party - heck, Ron smokes up a storm and downs Scotch right before air time! Veronica's arrival sets hormones in motion and she makes a genuine connection with Ron eventually, but when she usurps his throne standing in one evening, an out and out war begins. "Anchorman" is essentially ninety minutes of name-calling and surprise cameos masquerading as comedy. The cleverest bit involves Ron's constant insistence that he cannot speak Spanish in a city a stone's throw from the Mexican border. A couple of other bits involving jazz flute and the thirst-quenching properties of milk produce mild chuckles. Calling in comic heavyweights to kick a dog off a bridge or engage in a street brawl does not make those scenes funny, however. No satiric content is drawn from the news stories, although an animal theme is neatly threaded throughout. McKay' first time at bat is mediocre. The film is choppily paced and executed. One fantasy sequence inserted in lieu of a sex scene is a surprising idea that is well handled. Costume and makeup are faithful to the era without being overly exaggerated. Musical choices are so-so except for a humorous a cappella rendition of "Afternoon Delight" by Ferrell, Rudd, Carell and Koechner. "Anchorman" is proof positive that one huge hit should not automatically green-light a star's pet project. Ferrell is a funny guy, but he's merely treading water here. If it's comedy at a news desk you're looking for, rent last year's "Bruce Almighty" instead.