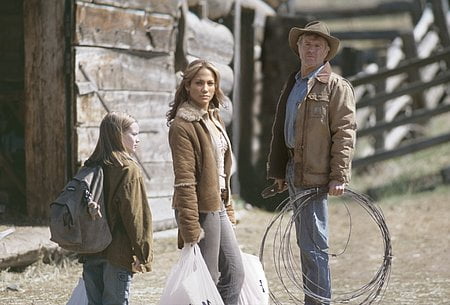 Jean Gilkyson (Jennifer Lopez) has put up with one too many beatings from her abusive boyfriend, Gary (Damian Lewis). She packs her daughter, Griff (Becca Gardner), and their few belongings into her car and set off for a new life. But, the car throws breaks down in the middle of nowhere and, without transport, mother and daughter go to the only place they can – the ranch belonging to Jean’s estranged father-in-law, Einar (Robert Redford). The return is tense but the tiny family has little choice but to try to finish “An Unfinished Life.”

Jean Gilkyson (Jennifer Lopez) finally listens to her daughter Griff (Becca Gardner, "What Ever Happened to Alice") and leaves her abusive boyfriend Gary (Damian Lewis, "Dreamcatcher"). With little money and a wish to leave no trail, Jean returns to the Wyoming ranch of her father-in-law Einar (Robert Redford), a man who has yet to forgive her for "An Unfinished Life." Director Lasse Hallström ("Chocolat," "The Shipping News") won't be reviving his reputation with this contrived and cliched adaptation of Mark Spragg's book (screenplay by Mark and Virginia Korus Spragg), but "An Unfinished Life" is still a well crafted piece of work with a strong sense of place (Ishawooa, Wyoming) and fine if unexceptional work by the ensemble cast. The film's title is the epitaph on the gravestone of Griffin Gilkyson, Einar's only son who was killed in a car accident while Jean was driving. Einar has become a bitter man, struggling with alcoholism and keeping a wall up between himself and just about everyone except for his hired hand Mitch (Morgan Freeman, "Million Dollar Baby"), and, to a lesser extent, diner waitress Nina (Camryn Manheim, "Dark Water"). Since losing his son, Einar has also lost his wife and his cattle herd, the latter because Mitch has been unable to help with the workload since being badly mauled by a bear (Bart the bear, "Without a Paddle") who had attacked a Gilkyson calf. Jean and Griff arrive just as that bear, caged by authorities right before Einar was able to shoot it, is being hauled into a roadside zoo. That bear is obviously pretty symbolic. Einar's none too pleased to see his daughter-in-law although he's surprised to find out he is a grandfather. Mitch, in typical Morgan Freeman fashion, plays the healing moral advisor from the wings, attempting to make what's left of the Gilkyson family whole again. He begins by making Einar visit the bear. Jean gets a job with Nina and comes on to Sheriff Crane Curtis (Josh Lucas, "Stealth") as both a no strings attached lover and protector from the man she's convinced will follow her, but it's Einar who takes action when Gary comes to town, even as he drives Jean out with his harsh words. It's up to a little girl and a handicapped hired hand to get Einar past his crippling loss. Redford and Freeman are good actors, even when they're this obviously typecast - Redford as the grizzled, cowboy loner and Freeman as the wise buddy quietly pulling a pal through a bad emotional patch. Both also share intense scenes with Bart, each ridding himself of different demons, but again, we've seen Redford go one-on-one with wildlife before. Jennifer Lopez is just fine as the woman drowning her own guilt in abusive relationships. She doesn't overplay and is believable in her understatement. Young Becca Gardner does very good work as the resentful daughter who becomes a catalyst to rid grandpa of his ghosts - she's the Scarlett Johansson to his Horse Whisperer. Support is also good with Manheim a shoulder to cry on whose empathy bubbles from a tragedy in her own past and Lucas a confident yet lenient law official. Lewis slightly overdoes the hair trigger violence. A slower simmer would have been more effective, but he does project imminent and unpredictable danger. Production designer David Gropman ("Chocolat," "The Shipping News") and art directors Karen Schulz Gropman ("The Shipping News") and James Steuart ("Final Destination 2") use stunning Northwestern Canadian locations to substitute for Montana, with the town of Ishawooa, Einar's ranch and even Angie's zoo all a living, breathing place. Cinematographer Oliver Stapleton's ("The Shipping News") crisp visuals provide a cool, brisk feel and Deborah Lurie's ("Imaginary Heroes") simple score avoids tipping over into overt sentimentality. "An Unfinished Life" is by-the-numbers filmmaking, but enjoyable enough on its own terms. Director Hallström needs to get back the kind of edge he showed earlier in his career with the underrated "Once Around."

Director Lasse Hallstrom first came to my attention back in 1985 with his warm, funny and poignant story about a mischievous 12-year old in “My Life as a Dog.” Since then the eclectic helmer has created such notable films as “What’s Eating Gilbert Grape,” “The Cider House Rules” and “The Shipping News” (which I seemed to like more than most critics at the time). His latest film, “An Unfinished Life,” benefits more from its solid cast and good production values than it does from its routine, predictable story by Mark Spragg and Virginia Korus Spragg. Jean and Griff’s unexpected arrival at Einar’s former dairy farm comes as a shock to him and a pleasant surprise for his invalid best friend, Mitch Bradley (Morgan Freeman). Necessity requires that Einar take in Jean and, his unbeknownst to him, granddaughter and a tenuous truce begins. Jean gets a waitress job in the nearby town but Griff wants to leave immediately after her grandpa’s gruff greeting. But blood is thicker than water and a bond begins to grow between grandfather and granddaughter while Einar and Jean come to terms with their estrangement following the death of his son, Jean’s husband, in a car accident years before. Extras, such as the arrival of the grizzly bear that mauled Mitch and the appearance of Gary in town, flesh out the story of a family healing after a tragedy. The bear is a different idea and allows for drama but the rest of the story mines no new territory and is pretty much by the numbers. The likable veteran cast gives full body to their characters with Redford looking seedy, stolid and continuously despondent over his loss of his son. Lopez gives a straightforward perf as an abused woman trying to make a new life for herself and her daughter. Morgan Freeman is, always, a fine actor but is given a stock role, for him, as the kindly, understanding Mitch. Newcomer Becca Gardner holds her own very well opposite the imposing figures of her costars. Supporting cast is minimal but well played. Josh Lucas is amiable as Crane Curtis, the town’s sheriff and potential love interest for Jean. Camryn Manheim fills the bill as diner owner and Jean’s boss, Nina, who befriends the newcomer when she most needs it. Damian Lewis, who has worked unnoticed for years until he broke through in TV’s “Band of Brothers,” does a credible job as the abusive boyfriend who gets his deserved comeuppance. Production is well done, too, with Einar’s ranch house and Mitch’s shack reflecting the men’s personalities. The open skies location nicely uses Canada’s British Columbia and Alberta to stand in for Wyoming. The experienced helming by Hallstrom and the competent cast make up for the screenplay that explores no new territories. The happily ever after ending holds no surprises but it is a likable effort nonetheless.