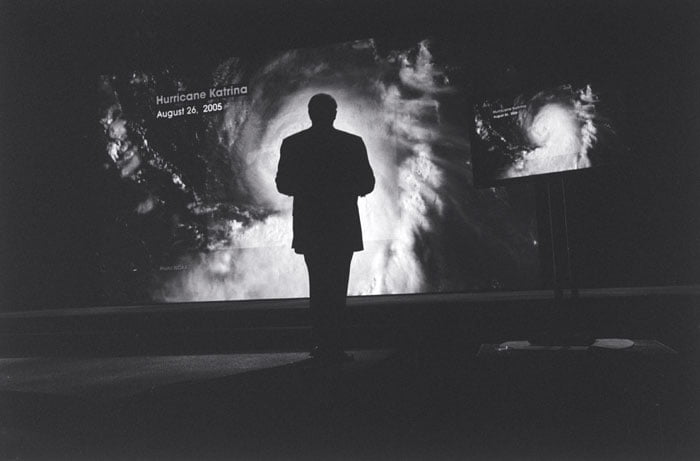 Former Vice President Al Gore has been a champion of environmental concerns since his youth and warning the world about global warming has become his mission. Director Davis Guggenheim ("Gossip") saw Gore's talk on the subject and proposed turning it into a film. Be surprised to see an Al Gore you may not have known. The man who should be president is articulate, intelligent, knowledgeable, and passionate as he describes why the imperative need for action to avoid a looming crisis is for too many "An Inconvenient Truth."

Al Gore has presented his 'little slide show,' as he calls it, thousands of times and luckily Guggenheim saw him speak and knew how to make it cinematic. We do see Gore speaking to an audience with a multi-media show which includes theater-sized projections of stunning stills and shocking video, even a comedy short by "Simpsons" creator Matt Groening, but Guggenheim opens the talk up too, taking us around the world along with Gore, who we see in airports, the backs of cars and countless hotel rooms. Gore has the ability to explain a complex problem in clear and simple terms and goose up his points with quotes from the likes of Mark Twain and Upton Sinclair. He uses graphs that chart atmospheric statistics over millions of years and side by side photographs of sites in Patagonia, Kilimanjaro, the Alps and Antarctica mere decades apart to impart the severity of changes in the environment man has introduced in such a short time. And for anyone who has read skeptical news reports belittling global warming's impact on the effects of, say, Hurricane Katrina, Gore has more facts on hand to show the imbalance between media reports and scientific publications. It doesn't take a genius to deduce the influence of lobbying groups on the media, points also made in such recent films as "Why We Fight" and "Thank You for Smoking." It is pretty startling to be told that the United States cannot sell cars in China because we do not meet their emission standards. It is downright scary to be shown what is happening in Greenland and to learn that should it break apart, a scenario downright possible within this century, an Ice Age could descend upon Europe. These are "Day After Tomorrow" type consequences which Gore compellingly and absolutely backs up. Of course, Al Gore the politician emerges as well, as Guggenheim flashes back on his history, including the botched 2000 presidential election, but Gore carefully steers away from the type of know-it-all backlash of his Internet creation comment by stating that he was simply lucky enough to have been introduced to the subject as a college student by Roger Revelle, a Harvard college professor who pioneered measuring carbon dioxide in the atmosphere. Gore the family man comes through as well, with flashbacks to his family's Southern farm at times seeming like a miniature "Bright Leaves." Gore uses his sister's death from lung cancer as an example of how the consequences of growing tobacco forced change at the family farm as a parallel to his topic, but it is interesting that he neglects to comment upon his dad's Angus cattle, seeing as how livestock produce methane which is a significant contributor to the greenhouse effect. The filmmaker and his subject have also taken lessons from "March of the Penguins," tugging at the heartstrings of animal lovers everywhere with a CGI rendition of a desperate polar bear (polar bears have been drowning in recent years, forced to swim greater distances as ice floes melt). At a Q&A after a screening of "An Inconvenient Truth," Gore described himself as a 'recovering politician, on the ninth step,' and spoke passionately about a 'shared moral vision.' One could not help but think of a united post-9/11 America redirected towards a common cause (Gore even suggests the current focus on terrorism is short-sighted in the film). One could also not help but think where we would be today had things gone differently six years ago. What one comes away with hoping for the future is that we do not look back on Al Gore as we look back now on Eisenhower ("Why We Fight") or Edward R. Murrow ("Good Night, and Good Luck") - as a man who gave a warning unheeded.