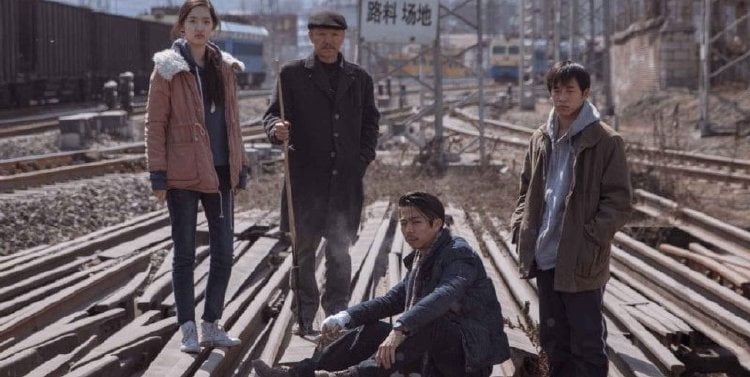 16-year-old Wei Bu (Yuchang Peng) is having an awful day. His abusive father (Guozhang ZhaoYan) demands he leave his home. Defending his friend Li Kai (Zhenghui Ling), accused of stealing a phone, Bu accidentally pushes bully Yu Shuai (Xiaolong Zhang) down the stairs. Another friend, Huang Ling (Wang Yuwen), is facing the music of a newly uploaded video showing her with their school's Vice Dean (Xiang Rong Dong), his company preferable to that of her caustic mother (Wang Ning). With Shuai's older brother Cheng (Yu Zhang) and the Dean's wife after them, Wei asks his 60 year-old neighbor, Wang Jin (Congxi Li), himself facing the death of his dog and a nursing home, for money to travel to Manzhouli where legend has it the world is being ignored by "An Elephant Sitting Still."

This long, slow despairing film is the first work of an incredibly promising talent. Unfortunately, it is also his last. Writer/director/editor Hu Bo, who titled his movie after a short story from his 2017 novel 'Huge Crack,' committed suicide at the age of twenty-nine shortly after the film was completed. In looking at life in northern China, Bo presents a society that has lost its way, one that is downtrodden, selfish and living in isolation in an industrial landscape devoid of natural beauty. There is a suicide threatened and one accomplished, yet for all the film's depressing story lines, Bo achieves hope, the film ending with a newly formed family experiencing the trumpet of a never-seen elephant. Familial breakdown is everywhere we look, from Bu's awful dad to Ling's resentful mom to Jin's daughter (Danyi Li) and son-in-law (Wei Kong) who cannot wait to kick him out of his own apartment to Cheng who cannot stand the brother he is out to avenge. Looking for shelter, Bu enters his grandmother's house when he gets no response and finds her dead, who knows for how long (he reports the news to an uncle who accuses him of only visiting her when he needs money). It may be difficult to believe, but Bu faces a betrayal greater than the one he begins his day with, one that almost sends him over the edge. Jin's day reflects an utter lack of compassion, the nursing home he visits simply warehousing the elderly, the couple whose dog attacks his littler one accusing him of blackmailing them. The Vice Dean who's been taking advantage of Ling turns on her when their relationship goes viral, his wife laying all the blame at the young girl's feet. But Jin can still find happiness in the embrace of his granddaughter (Yixin Kong) and the kindness he shows Bu is reciprocated. Even Cheng, self-described as 'heartless,' will surprise us. Despite the continued sentiment that world is a miserable place, this small group is convinced to 'go take a look' elsewhere. The film's predominant looks is gray, its colors so desaturated at times it almost appears black and white. Cinematographer Chao Fan's work is masterful, frequently using Béla Tarr-style follow shots, shooting entire scenes without a cut then following the action into another. His and Bo's composition and orchestration are outstanding as is Bo's direction of his ensemble. Music by Hua Lun is spare and simple. While the film, which reflects one day in what seems like real time, is long at 230 minutes, it never bogs down, its natural rhythms and poetic visuals gently pulling us along (while Bo's story includes some horrific events, the filmmaker suggests rather than depicts violence). "An Elephant Sitting Still" is a special film, a one-off that will always leave us wondering what might have followed. Grade: