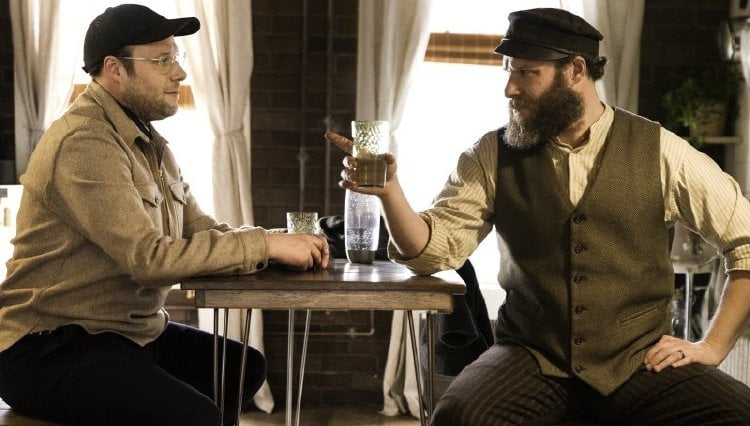 Early in twentieth century Eastern Europe, Jewish ditch digger Herschel Greenbaum (Seth Rogen) doubles his workload to earn enough money to woo Sarah ('Succession's' Sarah Snook) with the gift of a whole smoked fish.  After Cossacks attack their wedding, burning their town to the ground, the Greenbaums emigrate to America, where Herschel gets a job killing rats and has the misfortunate to be enclosed in a pickle brining vat just as the factory is condemned.  100 years later, the preserved Herschel is unearthed and reunited with his only living relative, great-grandson Ben (Rogen), whose seeming disregard for tradition creates “An American Pickle.”

SNL and 'Man Seeking Woman' writer Simon Rich’s short form experience is very much in evidence here, the groundwork for his central conflict so shaky, we must suspend disbelief to relish Seth Rogen’s delightful dual performances in an escalating war.  That’s a shame because Rich is capable of comedy gold, like his twentieth century prologue that’s comparable to the best of Woody Allen’s early work or his satiric jabs at Brooklyn hipsters.  Perhaps a more seasoned director could have gotten around this issue, but "This Is the End" and "The Disaster Artist" cinematographer Brandon Trost makes his feature debut working with one actor playing against himself, a big enough challenge handled capably.

Another screenwriting misstep has Herschel going from the infamy of his hundred year preservation to Brooklyn obscurity in no time flat.  Welcomed into Ben’s apartment, the great-grandfather-of-the-same-age marvels at such things as Alexa and the unimagined wealth of owning 25 pairs of socks, but nothing, just nothing, beats the magic of a SodaStream, seltzer having been only a dreamed of luxury back in the homeland.  But trouble begins to brew when Herschel notices there are no family pictures in Ben’s apartment and that Ben is reluctant to visit the family burial plot.

But he does and of course, the small plot of land which brought much pride to Herschel and Sarah back in the day is woefully neglected.  When contractors arrive to raise a new billboard for vanilla flavored vodka, Herschel interprets it as another Cossack invasion and a brawl lands the two lookalikes in jail.  After that fiasco, Herschel begins to accuse the freelance mobile app designer of lacking the courage of his convictions in launching Boop Bop, his program which instantly analyzes a product’s ethical background.  Ben accepts the challenge and emails a venture capitalist who loves the idea!  But he’s turned down because his recent arrest fails his own app’s analysis.  After a heated argument, Herschel leaves, telling Ben he’ll make the 200K required to buy the vodka billboard on his own.  The next time Ben sees his great granddad, he’s become a sensation selling artisanal pickles on the streets of Brooklyn and Ben conspires to bring him down.

Rogen’s Ben is a less humorous version of his “Long Shot” loser, a chubby cap wearing loner Herschel always mistakes for a ‘shapely female’ in photographs, and it is Ben’s excessive vitriol that is inexplicable here.  The ultimate sentimental explanation for this may be narratively unconvincing, but it keeps the character sympathetic.  It is Rogen’s Herschel who delights here with his naturally grown beard, Eastern European accent, antiquated way of speaking and way with traditional Jewish dance.  That he remains the one we root for even as Ben provokes the racist and misogynistic views of Herschel’s day into the open is an adept balancing act Rogen skillfully pulls off.

Trost’s production ably substitutes Pittsburgh for Brooklyn neighborhoods, Nami Melumad’s score marrying both eras of the Greenbaum family by weaving in klezmer music as Herschel’s theme.  One wishes “An American Pickle’s” script had been tuned a bit more tightly, but Seth Rogen’s man from the shtetl may just have you craving pickles with a chaser of seltzer.  Stick around during the closing credits from an amusing appreciation of “Yentl.”

Herschel Greenbaum (Seth Rogen) and his wife Sarah (Sarah Snook) flee the poverty, oppression and rampaging Cossacks of their Easter European country to find a better life - and be rich. You know, afford your own gravestone rich. So, they immigrate to America to find their fame and fortune in “An American Pickle.”

The move proves to be a fortunate one when Herschel lands a good job at the local pickle factory as the resident rat killer. One day, though, the rats get the better of him and, in a blur, he lands in a vat full of pickles and brine just when the factory is shut down – for 100 years. Flash forward to now and a bunch of kids break into the old factory and discover that Herschel is, in fact, still alive and perfectly preserved. Of course, the remarkable event goes viral and he finds out that he has a great grandson named Ban (also Seth Rogen).

First-time feature director and long time cinematographer Brandon Trost, with Simon Rich adapting his short story, Sell Out, comes up with a mishmash of ideas that tries to cover too many bases. At first, it is a fish out of water, Rip Van Winkle yarn as Ben introduces his same-aged great grandfather to the 21st century and all of its wonders.

This path should have been enough to sustain the tale with the plethora of ways that our technology would affect our naïf, Herschel. Instead, the team dovetail’s the story as Ben and his great grandpa angrily part ways, have a feud, partake in viral videos and, hopefully, live happily ever after.

Seth Rogen has a ball playing the outgoing, bellicose Herschel, while his much more nebbish great grandson Ben is a more reactive and less decisive, becoming resentful of his ancestor’s success in the modern world and his own failures, due to excess caution. That is a lot of stuff to process in what is not quite a light-hearted comedy.

I found that, as I watched “An American Pickle,” that what I wanted most from all of the angst and conflict was a happily ever after, feel good story. I will leave it to you to find out.