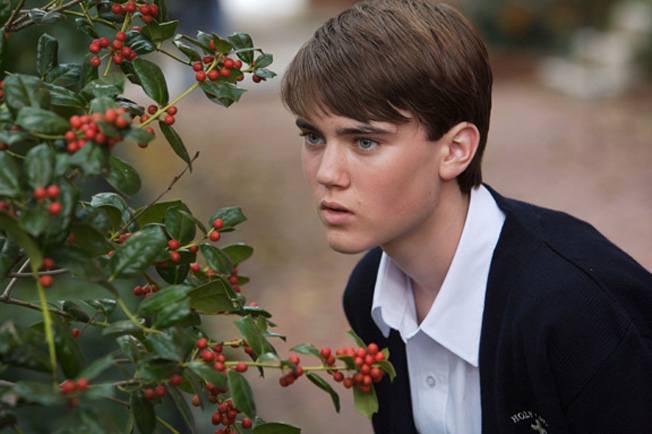 Thirteen year-old Catholic school boy Adam Stafford (Cameron Bright, "Birth," "Thank You for Smoking") leads a fairly sheltered life, even living in Georgetown with journalist parents in JFK's Washington. New neighbor Catherine Caswell (Gretchen Mol, "The Notorious Bettie Page," "3:10 to Yuma"), a woman mom (Perrey Reeves, HBO's "Entourage") practically brands with a scarlet 'A,' opens Adam's eyes to a world of sex, drugs and special ops when he realizes she is having the epitome of "An American Affair."

This film begs many questions of director William Olsson, screenwriter Alex Metcalf, whose only other post 1999 scribing credit is "CMT's Greatest Tour Buses," and Cameron Bright's agent. Firstly, is Olsson spatially challenged? Throughout the film Adam switches between describing the Stafford home's relationship to Caswell's as 'across the street' and 'next door,' to the point of actual annoyance. Maybe Olsson was trying to inject a hint of the supernatural, just as his climatic scene cannot fail to recall "The Exorcist." Did Metcalf spend a weekend watching "Summer of '42" and "JFK" and decide they'd make a good mash-up? And if he added to the Swedish director's geographical confusion in DC, how to explain his own problem with pop culture datelines that has his heroine grooving to Indian ragas along with her acid in 1963? (Yes, the C.I.A. had an early interest in the drug, but the Beatles hadn't popularized Indian music yet.) Lastly, is Bright looking to be typecast as the weirdly younger man to cool blondes more than twice his age? Adam, who seems sheltered for the son of DC journalists, acts aggressively once he spies Catherine in a window, reclining in a slinky robe she hasn't bothered to secure. Caught returning the mail he's steamed open (to find a White House invite and a vial of clear liquid signed 'love George'), Adam invents an errand to find work doing chores. In an exchange with sexual overtones ('Do you know JFK?' Adam asks, spying a picture of the two. 'My mom shook his hand once. Said it made her feel like being naked.'), Catherine hires him to landscape. One night Adam sees the man himself appear and get hustled into Catherine's brownstone via a rear entrance (as Olsson intercuts the action with scenes of the same JFK making his famous 'Ich bin ein Berliner' speech - now we introduce time travel and not once, but twice, the famous phrase is mistranslated as 'We are all jelly donuts.'). In quick order, Adam is introduced to Catherine's miserable ex, F.B.I. guy Graham Caswell (Mark Pellegrino, "Capote," "The Number 23"), shady C.I.A. operative Lucian Carver (James Rebhorn, "Far From Heaven," "The International"), and, when he happens to cross paths with both out and about in the Capitol, shady Cuban Del Valle (Gerry Paradiso). Adam reports back on a whispered conversation heard from behind a pillar fifteen feet away and Catherine becomes anxious, but not before they can discuss her modern art ('Form is dead,' at least until an - unintentionally, I'm sure - 'ironic' coda) and have a free for all with paint after a Scotch on the rocks. Poor Gretchen Mol, up and comer of a decade past. She's actually pretty good here, despite a ridiculously overwritten yet sloppy script. She maintains the right air of mystery and vulnerable sophistication and her indulgence towards the nice looking hormonal thirteen year-old boy is believable. Bright doesn't have much else to play but raging libido ever-so-slightly held in check by a sense of chivalry. He's OK, but the filmmakers make him the scourge of his class's young girls when they would instead have been vying for the attention of the best looking kid in their class. As Adam's dad, Noah Wyle (TV's "ER," "Nothing But the Truth") is OK, but Reeves is shrill as mom Adrienne. Rebhorn gives off an air of malevolence as the spook and Lisa-Lisbeth Finney paints an appropriately strange Sister Mary Eunice. The film benefits from its location shooting for an air of authenticity it achieves nowhere else (Were kids' parties in 1963 racially integrated and did they already fling around the 'F' word? Does sleeping in paint-spattered clothes really result in sheets designed by Jackson Pollock?). Note that the print of the movie seen was credited as "Boy of Pigs," a play on a phrase that is as inept as the film itself, if a more colorful title that its present incarnation.