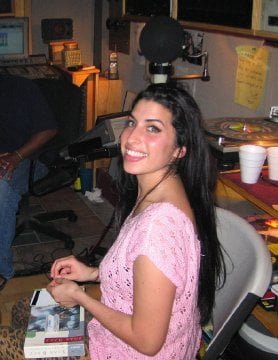 Director Asif Kapadia ("Senna") set himself a large goal, wishing to undo public perception of a music star who'd been hounded by the media, portrayed as a yet another junkie who'd done themselves in. While Winehouse's classic jazz voice is still esteemed, Kapadia provides the background that shaped the music, making a tragic loss more personal in "Amy."

Wow. Like many, I've appreciated the music of Amy Winehouse, but it's never given me goose bumps like it does here, witnessing that mature voice emanating from such a small young girl. Kapadia doesn't go the usual route, beginning with Winehouse's death, instead kicking off with a 1998 video of fourteen year-old Amy mucking about with her friends. Then she begins to sing 'Happy Birthday' and it is extraordinary, as is the recording of her with the National Youth Jazz Orchestra from two years later that follows. The way Kapadia weaves his material together also leaves one with the impression we're hearing much of Amy's story in her own words. By 2002, Amy had gotten her own apartment in East Finlay where she could smoke pot with her friend Juliette and not worry about what her parents might say. The young woman we're presented with is a free spirit yet a bit shy, her Jewish heritage giving her something of an outsider status. As he moves forward with his timeline, Kapadia begins to fill in blanks, warning signs unheeded. By the time he's finished you'll come away from "Amy" realizing that she was done in more by exploitation than anything she did to herself. With her niche genre, Amy started small and small is how she always saw herself. She never expected nor wanted fame, aspiring to appreciative audiences in small jazz clubs. Her first album, 2003's Frank, brought a small flurry of media attention - we hear Amy's amusing responses to a radio station on the Continent, watch her making funny faces as another interviewer compares her music to Dido's(!) It is here that the director begins to add history - depression following her parents' separation treated with Seroxat at the age of nine, a 'diet' that was clearly bulimia which her mother overlooked. Amy's fame didn't get in the way of her friendships although her behavior strained relationships. Juliette pinpoints her 2005 move to Camden Town as the beginning of the end. Never a good judge of men (her first, older, boyfriend inspired 'Stronger Than Me') and always seeming to give more love than she received, Amy's relationship with Blake Fielder-Civil would prove toxic in more ways than one (he dumped her, only to turn up again after she'd won the Brit Award). Her old friend turned manager Nick Shymansky became alarmed, but her dad, Mitch, didn't think things were serious enough to consider rehab. As usual, Amy poured this into a song and exploded onto the global music stage. The petite singer was clearly loved by so many, but even some who loved her hitched their wagons to the star. Mitch Winehouse, among others, has denounced the documentarian he cooperated with, believing he's been misrepresented, but we have video proof of the man bringing a reality TV crew along with him to visit his daughter as she tried to get her health back at an island retreat (media pictures of her cavorting with a male friend in the surf caused Fielder-Civil, in jail at the time, to divorce her on infidelity grounds). When she finally went to rehab, Amy clearly embraced it ('I don't really mind it here'), but her new manager, her promoter Ray, only had her tour on his mind. After having seen performance footage of Amy in the early days, it is heart breaking to see the gaunt woman rotely going through her set in huge arenas. Tony Bennett admits to being a bit apprehensive about meeting her, but when we see them recording together, she charms him and us as well with her humility, starstruck by a childhood idol. Another tour, another meltdown, more contradictions - just as we're presented with evidence of Amy attempting to sabotage her own show, Kapadia cuts to Ray insisting that she wanted to work. Then, in July of 2011, the night before her old friend Nicky's wedding, her body gave out. She was found by her bodyguard Andrew. His devastation is palpable. Watching "Amy" is like seeing the devastation wrought upon Judy Garland by the entertainment industry concentrated by a factor of 10. Kapadia shines a new light on the artist and it's impossible to come away unmoved. Grade:

Having near zero knowledge about jazz songstress Amy Winehouse, aside from knowing her name, I walked into “Amy” pretty neutral on the subject. I came out with a genuine sadness for the young woman with an amazing voice who only wanted to sing her songs. Feature filmmaker turned documentary helmer Asif Kapadia (“Senna”) compiles an in depth collection of video footage from her very early days where she proved she could sing all the way through to the tragic end on 23 July 2011 when she was found dead in her London home. Apparently, because of the ravages that fame brought upon her – drugs and booze in destructive quantities – the 27-year old Amy’s heart simply stopped. (What is it about the age of 27 and the demise of some of the greatest music makers that lived in our time?) Kapadia and his team construct a smoothly flowing, well told documentary by deft use of jumping back and forth in time through Amy’s meteoric rise and, like a meteor striking the Earth, tragic and deadly destruction. If the intent of “Amy” is to strike an empathetic chord in your heart, then the filmmakers give us a symphony. I do not remember if someone says it in the documentary or that I had an original thought (?!?) but the statement, “Amy was a fabulous singer who got the fame she did not ask for,” is a good tag line for the film. Her mishandling by those she trusted – see “Amy” to find out who, why and how – cost the world a true talent who should have, like her mentor Tony Bennett, lived to give us the pleasure of her voice for a long, long time. Sadly, that is not going to happen.