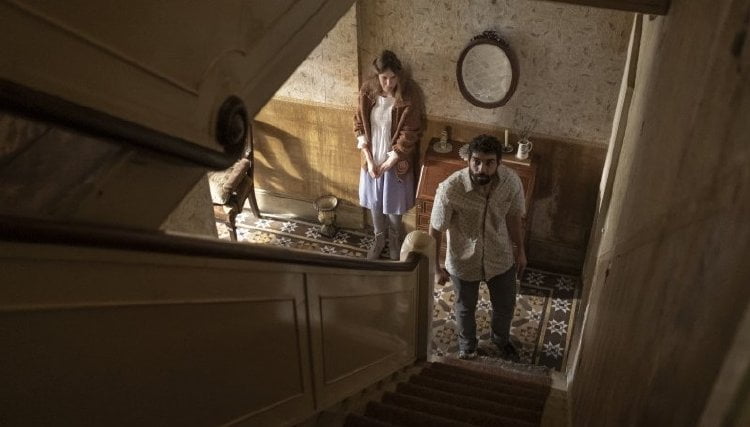 Seeing that Tomaz (Alec Secareanu, "God's Own Country") is having a tough time as a migrant construction worker in London, Sister Claire (Imelda Staunton) finds him a free living situation with Magda (Carla Juri, "Wetlands," "Morris from America"), a young woman the nun tells him could use some help around a home that is falling down around her ears as she selflessly provides around the clock care to her dying mother.  But nothing is as it seems here, and while Tomaz falls for Magda he is haunted by his experience as a soldier sentry in deep woods where he unearthed an “Amulet.”

British actress Romola Garai springs out of the gate with an inspired feminist folk horror tale as her feature writing/directing debut.  This is a film that starts in one place and slowly twists itself around until we are upside down, Garai effectively employing a flashback structure that moves in parallel to the current timeline.  She doesn’t ‘cheat’ by holding back information, instead illustrating two iterations of the same character acting in similar fashion with vastly different results dependent upon the revelations of chance.  This is a morality play eerily tricked out in unnerving genre trappings.

In a dark verdant forest, we see Tomaz agonize at his post, shaking while pointing a rifle at a desperate woman running towards him.  The soldier ends up helping Miriam (Angeliki Papoulia, "Dogtooth"), hiding her in his temporary quarters.  In a London manse so run down it has mold on the walls and no electricity, Tomaz is immediately eager to help Magda, a young woman clearly at the end of her rope.  But Magda resists his help, instead adding the new lodger’s needs to her chores, cooking delectable pastries and stews.  His concern for the young woman grows as he hears the godawful sounds emerging from the attic, where her mother les in pain, and witnesses her examining a nasty bite on her arm.

Noticing a black sludge around the kitchen sink, Tomaz does begin to help, tackling the home’s suspect plumbing.  Attempting to fix an upstairs toilet, he is horrified when the black water flushes down, revealing a large, pink bat-like creature in the bowl.  The first thing the horrified Magda, who thinks it’s a rat, asks him to do is to get rid of it.  Tomaz is shocked to discover it’s still alive, receiving a bite for his troubles.  As Garai shuttles between past and present, we’ll learn that Tomaz knew and admired Miriam from their home town and that Magda’s treatment of her mother (Anah Ruddin) appears horrifically abusive.  But Garai isn’t finished playing with our expectations yet.

In addition to a fabulously effective production, Garai’s filmmaking chops are evident in her casting.  Juri is exceptional here, her old-fashioned naivety and social awkwardness playing into the same fairy tale aesthetic as production designer Francesca Massariol’s forest.  Costume designer Holly Smart clads her like a WWII era Polish farmwife, yet Juri’s sensuality shines through.  When Tomaz attempts to liberate her by taking her out dancing, her childlike zeal and twitchy abandon on the dance floor turn heads for all the wrong reasons, as creepy as anything we’ll find in that attic.  Secareanu, meanwhile, is earnestly downtrodden, a ‘good man’ as he is told, in tough situations.  Staunton is delectable, employing that grin which squeezes her face into sparkling impishness and indeterminable intent.

Massariol’s moldy walls and yellowing wallpaper follow on the heels of “The Relic’s,” another film coincidentally about a disturbingly unwell mother, but this house is more outwardly sinister in its decrepitude, more gloriously Gothic in its exterior.  Nick Baldock’s sound design unsettles with clanging pipes and scraping sounds, complemented by Sarah Angliss’s mournful, warning score.

With “Amulet,” Garai announces herself as a filmmaker fully formed.  More of this, please.