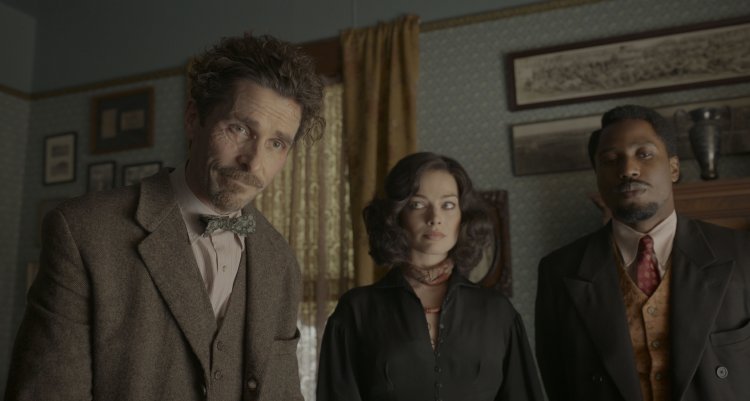 When Burt Berendsen (Christian Bale) is contacted by Liz Meekins (Taylor Swift) asking for a special ‘medical procedure’ for her father, he turns to his lawyer Harold Woodman (John David Washington) and morgue nurse Irma St. Clair (Zoe Saldana).  Liz believes her father was murdered because of ‘something terrible he saw,’ and sure enough Irma finds evidence of poisoning.  But Burt and Harold soon find out they are up against sinister forces, a battle they will fight with Valerie Voze (Margot Robbie) when she reappears in New York after they last all lived together in post-WWI “Amsterdam.”

Writer/director David O. Russell ("Silver Linings Playbook"), who last feature, "Joy," was 7 years ago, appears to have lost his mojo, his based-on-fact, history-is-repeating-itself satire about fascism, racism and anti-Semitism drowned in an overly plotted, meandering tale cluttered with too many characters.  While it can be amusing to watch the intelligence agent antics of Michael Shannon’s Henry Norcross and Michael Myers’ Paul Canterbury, their ornithology jokes come across as Russell doing Wes Anderson and nothing to move his movie forward.

The film is filled with oddities such as this, war nurse Valerie saving shrapnel removed from the wounded to create what Nazis would classify as ‘degenerate art.’  We don’t meet her until a flashback from the 1933 opening which establishes General Bill Meekins (Ed Begley Jr.) recognizing the value of his all black regiment by replacing their racist captain with Burt.  When Burt is badly injured beside Harold, the two are tended to by Valerie who falls for Harold before the three take up joyful residence together.  But Burt, pining for his wife Beatrice Vandenheuvel (Andrea Riseborough) back in New York, breaks up the household to return to anti-Semitic in-laws who run him out of his Fifth Avenue medical practice and his home.  Burt turns to treating mainly black disfigured veterans in back alleys, his own badly scarred fact hidden by a patch and a glass eye while inconceivably continuing to court his wife on date nights.

As it turns out, Burt isn’t the only one with a questionable family as he and Harold discover when they locate Valerie in her family’s vast estate, sister-in-law Libby (Anya Taylor-Joy) treating her like a mentally deficient invalid.  It will come as no surprise that all assurances to the contrary, Valerie’s brother Tom Voze (Rami Malek) is one of the rich bankrollers behind the effort to get General Gil Dillenbeck (Robert De Niro), based on real life Major General Smedley Butler, to read a speech at Burt’s NY Veterans’ Reunion Gala intended to overthrow Roosevelt’s government.

Not content with his climactic gala, Russell seems to go on for another fifteen minutes explaining what has been pretty obvious all along, his anti-racist democratic message culminating with not one but two interracial couplings.  Robbie and Washington do connect wonderfully on screen with Bale as their third wheel, but they’ve been forced to fight for screen time among an enormous ensemble.  Ask me now who Timothy Olyphant’s Taron Milfax was and I’d be stumped.  Two detectives played by Matthias Schoenaerts and Alessandro Nivola are unnecessary.  The cast also includes Chris Rock, Max Perlich, Colleen Camp, Beth Grant and Leland Orser among others less well known.

Russell’s screenplay is so busy one has little time to stop and admire his production, which is first rate from interior design to exemplary costume, hair and make-up.   Daniel Pemberton’s fanciful flute-based score works overtime to keep the filmmaker’s film aloft.  “Amsterdam” can be appreciated for individual elements, but they’ve been assembled in too chaotic a sprawl.

Two WWI vets and best friends, Burt (Christian Bale) and Harold (John David Washington), are witness to a murder and are framed for the crime. But, there is much more afoot than simple mayhem and the two men, with the help of a young woman named Valerie (Margot Robbie), uncover an insidious plot to overthrow the presidency of the United States in “Amsterdam.”

Dr. Burt is a wounded veteran and physician whose life mission, after the war, is to help ease the intense pain so many veterans suffer from their horrific wounds, including one-eyed Burt. Harold, now a lawyer, was under Burt’s command during the war and they have been best friends ever since working together for the veterans. Valerie was a nurse giving care to wounded soldiers from the front. She and Harold also fell in love at first sight.

Their story ramps up when the boys witness the above-mentioned killing and are immediately blamed – by the murderer. This begins the story as the trio of friends work together to solve the crime and clear themselves. In the process, they uncover a deep state plot to replace the presidency with an autocracy of businessmen running the country. This plot involves the death of a prominent general, followed by the death of his daughter (Taylor Swift) by nefarious players out to silence her.

What we get from director-writer David O. Russell two movies/stories going on and one is more interesting than the other. Unfortunately, the interesting part is not the main story. That story is centered on an odd trio and it is a mess of characters, plot threads and misdirection that should intrigue but, instead, confuses.

The other story is a “what could have been” tale of a conspiracy back in 1933, called the Business Plot, and all it entailed. This plot, little known, is based on real events that could have been, except for the patriotic actions of loyal Americans. It is also the predecessor of our own January 6 attempt to overthrow the duly elected government. History may not repeat itself but it certainly rhymes.