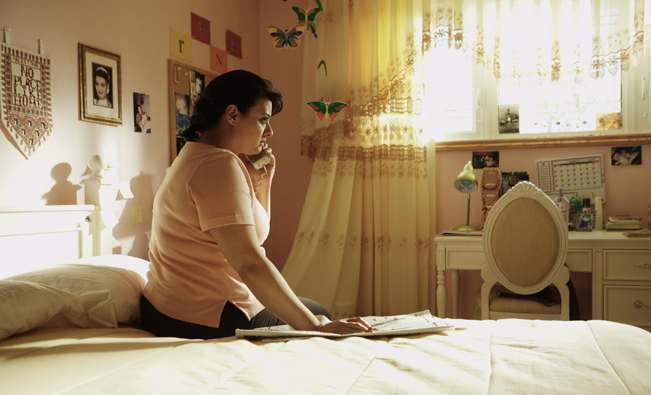 Muna Farah (Nisreen Faour) and her teenage son Fadi (Melkar Muallem) eke out a life in the Israeli-occupied West Bank, but it is a hard life for the divorced mother and her boy. When she receives notice that she is eligible for a US green card, Muna sees it as an invite to the promised land of milk and honey. However, Muna and Fadi will find out that nothing in life is easy when you come to “Amreeka.”

Zaftig Muna Farah (Nisreen Faour) is raising her teenaged son Fadi (Melkar Muallem) alone ever since her husband left her for a younger, slimmer woman. Life is complicated more by living in Palestine's West Bank and by caring for an elder mother and enduring the condescending macho attitude of her brother Samir. When Muna gets an opportunity to go to the States she is encouraged by Fadi, but she will face difficulties every bit as severe when she arrives in "Amreeka." After a couple of shorts and some writing for "The L Word," writer/director Cherien Dabis makes her feature debut with a subject that has been forming its own genre of late - the immigrant facing a hostile, post 9/11 U.S. (see "The Visitor," "Towelhead"). But Dabis's focus is more on the resilience of her central character, the warm and likable Faour, than it is on the issues. Thankfully, Faour is strong enough to punch this film through its softer, cuddlier and far more obvious approach. At home, Muna struggles, but it's still home. When she wins a lottery for a green card, Muna vacillates, but Fadi's enthusiasm for leaving for the U.S., where he believes he'll have a chance at college and a better life, makes up her mind. The fact that her older sister, Raghda (Hiam Abbass, "The Visitor," "Lemon Tree") has relocated there with her physician husband Nabeel (Yussuf Abu-Warda, "Kadosh") and their two kids is additional security. But when Muna packs, she puts her money roll in a cookie tin, the first of Dabis's hand-waving foreshadowing as we just know it will be confiscated at customs. Which it is, under Fadi's unknowing watch. Muna is devastated but keeps this development to herself, determined to be independent as quickly as possible, but she's thrown another set back when no bank will hire her, despite her years of experience and dual degrees. Finally she gets a job at a White Castle, but pretends to work in the office next door (in a sweet touch, a woman she has met there covers for her). Meanwhile Fadi is tormented at school (Fadi immediately being converted to 'Fatty,' which reverberates later when Raghda becomes exasperated on the phone with 'yes, Ragdoll, yes') until his cousin Lamis (Selena Haddad) gives him fashion advice and his cousin Rana (Jenna Kawar) takes him out for some pot smoking and revenge. Muna cannot understand the sudden 'Americanization' of her son, but when he lands in jail and her niece begs her not to tell her mom, Muna turns to the sympathetic school principal, Mr. Novatski (Harry Anderson lookalike Joseph Ziegler), the Polish Jew who has 'romantic interest' painted on his forehead. More tension is introduced between the sisters when Muna overheards Nabeel worrying about finances since his practice has been dwindling and Raghda romanticizes her homesickness for a country she hasn't seen in fifteen years. Everything goes about exactly as you'd expect things to go for Muna, but there are some nice pieces of writing underlying the obvious (Muna's seduction by a website that promises work selling a weight loss product - double bingo!) and the cast is strong. Nisreen Faour is a force of nature, well supported by experienced vet Abbass. The kids are all strong, the younger Haddad humorously horrified that her cousin be perceived as a 'FOB' (fresh off the boat) and the elder Kawar who embraces her outsider status as being unique (and who, speaking of sitcom star resemblances, could pass for Sara Gilbert). Rana's flip side can be seen in Matt (Brodie Sanderson), the blue-haired, pierced White Castle employee who slowly becomes Muna's unlikely friend. "Amreeka" doesn't provide any answers for Muna's problems or the cause(s) of them, but it's the always engaging tale of a plucky survivor. This is the type of film that used to marketed by the early Weinstein Miramax, a crowd pleaser whose foreign origin and assured direction make it seem like art for the masses.

This is a very routine coming-to-America story where nothing really unexpected happens but you enjoy watching it throughout, anyway. Nisreen Faour is a Palestinian Nia Vardalous (from “My Big Fat Greek Wedding”) but Faour is far more believable as a real person, and she grows on you as the story unfolds (unlike, for me, Vardalous). Hiam Babbas, as Muna’s married-to-a-doctor, living-the-good-life in America sister Raghda, is only two-dimensional but suits her purpose to the story. Things like Muna’s job and money problems, Fadi’s troubles with bullies at school, a budding romance between Muna and the school principal have all been done before and there are no new revelations along the way. “Amreeka” is a small budget, sincere little film that has its heart in the right place. The predictable story is a deficit (I, for one, like to be challenged, not led, watching a movie) but the likable cast and happily ever after ending make this enjoyable entertainment.