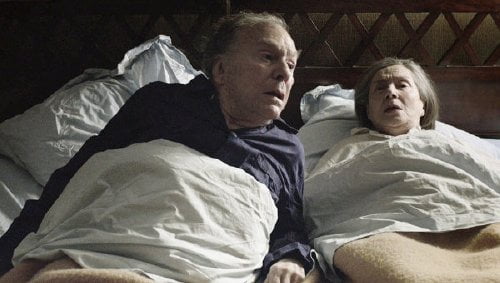 Georges (Jean-Louis Trintignant, "Three Colors: Red") and Anne (Emmanuelle Riva, "Hiroshima, Mon Amour") are still happy together in their 80's, having both made successful careers out of their passion for music, living a fulfilling life in Paris. But one morning, Georges is disturbed when Anne appears to wink out of consciousness, and it is indeed the first signal that they are about to enter the toughest phase of their "Amour."

Writer/director Michael Haneke's ("The White Ribbon") 2nd Cannes Palme d'Or winner is a strange beast, an attempt from the man who's made such shocking societal indictments as "The White Ribbon" and "The Seventh Continent" to deal with humankind's most exalting, warmest emotion. The film has been declared a masterpiece by many, and yet the director's inability to put aside his usual chilly remove encases "Amour's" protagonists under glass. Riva is quite convincing as a woman who goes downhill rapidly and rebels without a voice and she and Trintignant have one powerfully emotional scene together in the film's climatic act, but the couple's lack of back story and their cool relationship with grown daughter Eva (Isabelle Huppert, "White Material") makes it difficult to become emotionally invested. That doesn't mean the film is without merit. We know what we're getting into because Haneke opens his film with the police breaking into Georges and Anne's apartment where they find her poetically laid out to rest like some kind of operatic myth. We see the couple in a streetcar, engaged in conversation after a concert. Together they are courtly, almost a little too formal. And then Anne's carotid blockage hits and the few tidbits we pick up about the couple must be gleaned from between the lines. All Eva's character accomplishes is to make one conclude that her parents prized their own relationship over her and that this has blunted her emotional development. This uncomfortable adult child hardly seems evidence of a conventionally loving marriage. Georges is resentful of any attempt on her part to help and when she insists on seeing her mother, she is distraught by Anne's incoherence. Georges insists on caring for his wife almost entirely by himself. When a nurse is too rough washing her, she is fired on the spot. But is Georges's selfless care what Anne wants? She appears to 'tell' him otherwise when she lets the drink he's tried to give her slide down her chin. For his part, Trintignant plays Georges a little too decorously, his care difficult to pin down as love or politely doled out responsibility. Haneke makes the loss felt more with his use of a piano recording than his direction of his leading man. The film has the aesthetic of a hushed museum piece with Georges and Anne's old world apartment dressed in dark hues and tapestries. Twice, a pigeon makes its way in via a window, like a harbinger of death who senses a ruin in the making. Haneke is a true auteur and his films are always anticipated, but with "Amour" his approach needed to been less calculated, more messy. Here is a subject that demands a box of Kleenex and he's handed us a test tube. Still, even though this film's emotional register is dialed low, there are enough moments, enough provocation within its text, to recommend it.

George and Anne Laurent (Jean-Louis Trintignant and Emmanuelle Riva), retired music teachers, have had a long and full life together. Now, well into their 80s, Anne has a catatonic episode while making breakfast for George. Concerned, he takes her to the doctor and they learn that she is a victim of Alzheimer’s disease. When Anne expresses her fears of being hospitalized, George vows to never take her to the hospital again and care for her at home, but the toll this decision takes will test the couple’s “Amour.” Michael Haneke has had an eclectic filmmaking career with a film (and remade in the US) of a home invasion (“Funny Games” 1997 and 2007), another about the secretive video surveillance and paranoia of a French couple in Paris (“Cache” 2005) and one about the strange goings on in a remote German town just before World War One (“The White Ribbon” 2009). With “Amour” he takes on the social and emotional issues of aging and dementia as seen through the eyes of George as he cares for his beloved Anne during their waning days together. When people think about films geared toward the aging this past year, movies like “The Best Exotic Marigold Hotel,” “Hope Springs” and “Quartet” are the ones that come to mind. Haneke, though, does not go nicey-nice about the trials of aging like these films. Instead, he delves into the hearts and minds of an elderly couple as they cope with the pain and suffering of Alzheimer’s disease. This is a film about character study, not lovable characters as those other films, and the result is a drama that does not sugarcoat the negatives of getting old. We see, early on, the sweet and loving relationship between George and Anne as they attend a concert by one of their former, now famous, students. The night is shattered, though, when they arrive at their apartment and find they had a break-in. Pragmatic, George cleans up the mess and they go to bed. All seems well the next morning until Anne sits at he breakfast table staring, unseeing, into the distance. She soon recovers her faculties but George is worried and takes her to her doctor. The examination shows that Anne is in the first stages of debilitating dementia. George vows to take care of Anne and the harshness of their new life begins. Writer-director Haneke takes this in-depth study of Anne and George and brings us into their life. We are not mere spectators in this drama but are drawn into the quiet life of the octogenarian couple until the fateful day. Soon, their contented life is turned upside down and they become patient/caretaker instead of wife and husband. The story is heart-breaking in its honest depiction of life near the end. Trintignant and Riva show their acting skills and break our hearts with the palpable love and loss between the two.