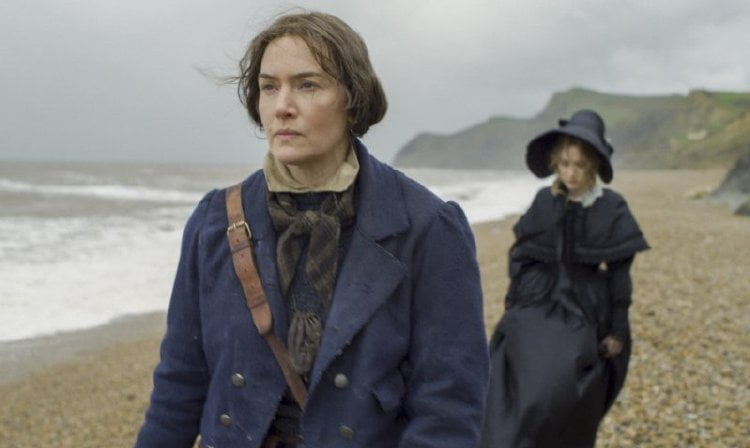 In the 1840’s, Mary Anning (Kate Winslet) is a dour self-taught palaeontologist long past her most famous achievement, the excavation of the first complete ichthyosaur skeleton at the age of eleven.  While she still makes daily trips to the wild coastline of Lyme Regis in search of fossils and shells, it is to sell them in the small tourist shop which supports her and her ailing mother Molly (Gemma Jones).  One day this is where obsequious admirer Roderick Murchison (James McArdle, 2018's "Mary Queen of Scots") finds her, but it is the convalescing wife he leads behind who will bring Mary out of her shell in “Ammonite.”

Writer/director Francis Lee ("God's Own Country") sure knows how to load a title with meaning – an ammonite is an extinct cephalopod that lived in a spiral shell, something which has been fossilized, something which keeps itself hidden away and something which could be sexualized à la “Spartacus’s” snails and oysters.  It is an apt metaphor for Mary the way she is depicted here, Lee taking the few known facts that have kept her name alive while fictionalizing the lesbian love affair that drives his film.  “Ammonite” cannot escape comparisons to last year’s “Portrait of a Lady on Fire,” with its drawing protagonist, windswept beaches, period setting and female lovers, but if that film was characterized by heat and fire, this one is distinguished by cold and water.

Mary’s existence is a hardscrabble one.  She dons worn boots and rough woolens to climb the rocky coast and dig in mud only to return to the small, stone, Spartan home, its windows obscured with sea salt, that she shares with her cold, taciturn mother (later we will learn that Molly too, has suffered hardship, having lost 8 of her 10 children which she now memorializes in the collection of china dogs she calls her ‘babies’ and cleans daily).  Dinner consists of a watery vegetable soup and a hard boiled egg, her Molly’s, rotten, dumped in the fire.  When Murchison arrives, Mary doesn’t even bother to look up from her work to inform him that her shop is closed, but she must listen when he offers payment to follow and learn from her next daily excursion.

But that offer is succeeded by another Mary wants no part of.  After we witness Murchison’s utter control over the miserable looking Charlotte (Saoirse Ronan) at their hotel, he proposes Mary act as her paid walking companion when he leaves his wife to continue on to Europe.   With Molly salivating over the income, Mary reluctantly agrees.  Finding any attempt at friendship rebuffed, Charlotte retreats to a bathing machine, but the horrific conditions cause her to become severely ill and she collapses at Mary’s door the next morning, turning Mary into the very thing she’d objected to, a caregiver.  Ironically, this is also what softens her approach.

Sarah Finlay's production design and cinematographer Stéphane Fontaine’s ("Jackie") camera work in conjunction to give us a cold, forbidding world which suddenly opens up into a verdant floral fantasy when Mary visits Elizabeth Philpot (Fiona Shaw) to buy some salve for the unconscious Charlotte.  We can tell by the women’s interaction that there is history here and that it ended badly, for Mary at least.  That salve will take on sensual properties when Mary spreads it across Charlotte’s chest and, as if in a fairy tale, she awakens shortly thereafter.  Dr. Lieberson (Alec Secareanu, "God's Own Country") is so pleased with Mary’s ministrations, he invites her to a musical evening at his home, but she insists she will only come accompanied by Charlotte.  The ‘date’ between the older woman, dressed as well as she can but humble looking in comparison to the radiant, stylish Mrs. Murchison (costume design by Michael O’Connor), will lead to a jealous misunderstanding that once resolved leads to an outpouring of passion.

Winslet is extraordinary here, every year of unappreciated hard work writ across her expression, her mannish way of walking the gait of a laborer.  The way she slowly doles out the hint of a smile or suppresses that jolt of surprise when Charlotte takes her hand is a study in beaten down isolation.  Ronan is not her equal here, more the supporting player reacting to the veteran, her Charlotte first oppressed, then light with happiness.  Gemma Jones has practically no dialogue and uses little facial expression other than a downturned mouth, yet her blue eyes come to life whenever money comes into the equation, like a miser from a Dickens novel, a touch of madness lending her sympathy.

Lee’s fashioned a wonderful what-if examination of a little known historical figure (Mary is rumored to be the genesis of ‘She sells sea shells by the seashore’) with layers of allegorical subtext.  If Mary is the ammonite, Charlotte and Molly are the eggs laid by the hens, that rotten one signifying the loss of children (while never said, Charlotte’s ‘convalescence’ is due to a suspected miscarriage).  He’ll use one last metaphor to leave us, his protagonists at odds on either side of the British Museum case which holds Mary’s ichthyosaur, a symbol of her life’s work.