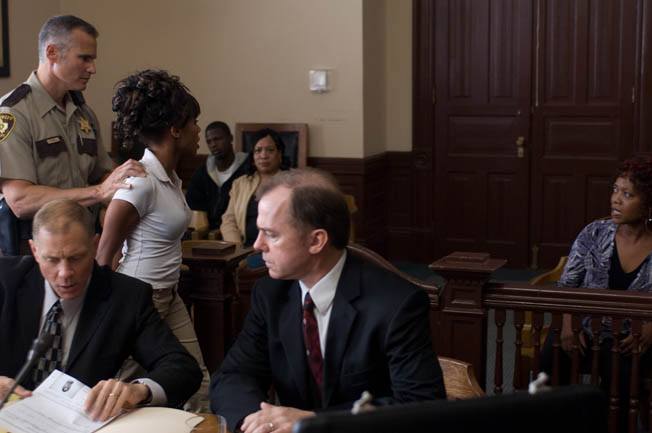 Dee Roberts (Nicole Beharie, "The Express") is a single mother living in Melody, Texas where she struggles to raise four girls with a job as a diner waitress and the help of her mother Alma (Alfre Woodard, "Beauty Shop," "The Family That Preys"). She's working when the local D.A. Calvin Beckett (Michael O'Keefe, TV's "Roseanne," "Frozen River") leads a raid on her housing project, but due to a Texas law that allows arrests to be made on the basis of one informer, Dee is handcuffed, hauled out of the diner and thrown into prison on charges of dealing drugs in "American Violet."

Regina Kelly's case made national news, happening as it did during the 2000 presidential election year in which the Republican nominee was the Governor of Texas (which the filmmakers make sure we notice with a prominent Bush/Cheney bumper sticker in the film's opening moments). Director Disney and writer Bill Haney ("The Price of Sugar") both come from documentary backgrounds, but chose to tell this real life story as a fiction feature. The story is an incredible one, but the black and white telling here gives it a broadcast 'movie of the week' feel. Despite a strong debut from Beharie, Dee/Regina is presented as a paragon of motherhood, a regular church goer, patient as a saint, with a strong work ethic and a sunshiny relationship with her diner regulars. How did this woman so focused on her kids fall in with so many bad men (the fathers of her two eldest were in prison and the father of her two youngest was an abusive drunk living with a suspected child molester, at least as depicted here)? She's been fictionalized like a heroine stamped by her director's last name. Of course, what is uncovered in "American Violet" is a corrupt system that preys on the poor. Drug bust sweeps net the impoverished, who are then given the option of taking a plea bargain which releases them or reduces their sentence but as a convicted felon, which also strips them of government aid, like the right to live in the subsidized housing they were rousted from, and the right to vote. Or they can fight the system and endanger everything - in Dee's case the right to even keep her children. A woman who thought she was being taken in for parking tickets, with no drug-related priors, is slapped with 70K bail. This is strong stuff, especially when seen in the light of the political ramifications of the most hotly contested election in American history. (And, as the filmmakers note at the end of their film, the D.A. at the root of all this has been reelected yet again.) Veteran thesp Woodard is a youngish grandma all too willing to be steamrolled by 'the way things are.' Woodard's Alma's darting eyes keep watch over her daughter's brood, but she is afraid when Darrell (Xzibit, "The Forgotten") claims his rights and lets him take them ('I'll come by when I want to give them back'), just as she is afraid at the thought of her daughter being in prison. Her performance reflects years of buckling under, if not to men in domestic situations, then to the authorities. As the ACLU lawyer who investigates the story, Tim Blake Nelson ("The Good Girl," "The Incredible Hulk") is compassionate pragmatism and his black colleague Byron White (Malcolm Barrett, "The Forgotten") barely says a word (which gives his climatic confrontation with Beckett more dramatic heft). In a small role, Pamala Tyson plays Dee's older neighbor Gladys like a scared rabbit, an example of the innocents who take what is the only thing they think they can get (that plea bargain, which forces her to sleep in her car). And while Disney and Haney avoid the pitfall of telling a black story through a white man's eyes, they give Dee a counterpoint in Sam Conroy (Will Patton, "The Mothman Prophecies," "Wendy and Lucy"), a local white lawyer mired in the very system Dee is floundering in whom Nelson's character Cohen targets for the case. Without a local guy who understands how things work, Cohen argues, they won't stand a chance. In taking Dee's case, Conroy must go after people he's known all his life, people his livelihood is dependent upon. Patton is quietly effective, his manner conveying what he's been observing for years. As the deeply corrupt D.A., O'Keefe exudes condescending entitlement and unquestioned power. Visually, the film is as plain as its dusty and claustrophobic surroundings. There are some rousing church scenes, but the filmmakers leave their biggest punch for the surprise testimony presented in pre-trial during some wily questioning by White. Even at the film's dramatic peak, though, it begs questions from its audience - if what we are hearing is known local scuttlebutt, why did it take Dee's legal team down to the wire to find it? "American Violet" (the film takes it's title from a plant on Dee's windowsill, which happens to be an African one) suffers from a rote dramatic structure, taking a story that already had all the elements and piling on more. Still, it is a well acted piece and a scary indictment of the American penal system.