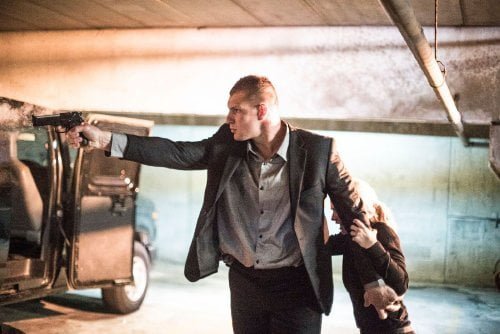 Assistant DA Ben Woods (Columbus Short, "The Losers") interrupts a college class on the roots of violence to ask its professor, Amanda Tyler (Denise Richards), to consult on a stay of execution under consideration by a Texas governor. Tyler, who once sought the death penalty for the killer of her police officer husband, agrees the next day. After several meetings with Jackson Shea (Kaiwi Lyman-Mersereau, "Traded"), her eyes are opened to the systematic causes of "American Violence."

Director Timothy Woodward Jr. ("Traded") has a valuable message but he's executed his movie in such spectacularly amateurish fashion he's more likely to incite audiences to laughter rather than serious contemplation. If you didn't buy Denise Richards as a nuclear physicist in "The World Is Not Enough," you're unlikely to accept her as a criminal psychologist here, although truth be told, she's capable of delivering a line convincingly - as long as the camera isn't on her. Things initially begin to look up as we flash back to Jackson's story, but Woodward cannot get out of his own way. After initially casting Jackson as some sort of Hannibal Lecter (he's placed in a standalone cage to speak with Amanda and cuts off her first question with a reference to his 'mother's tit milk'), we learn of the three incidents that built to land him on death row. As a young boy, his mother innocently allows his Uncle Mike (J. Todd Anderson), a pedophile from central casting, to tuck him in nightly. The grown Jackson bashes the guy's head in when Mike transfers his attentions to a young girl. Sprung from jail, he's hired by his ex con buddy Martin Bigg (Michael Paré, "Streets of Fire," "The Lincoln Lawyer") to rob professionals engaged in double back billing (giving clients cash discounts, then charging their insurance), but Martin's not smart enough to smell the trouble in an unexpected $600K haul and is tortured to death by its owner (Nick Chinlund, "Need for Speed"). Jackson avenges his friend. His third offense, most egregious in the eyes of the law, circles back to the execution which opens the film. Prison Warden Richard Morton (Bruce Dern) agrees to let Jackson free with a new identity if he'll take out a drug dealer as the deal goes down, but Morton's got an agenda Jackson doesn't know about. Woodward Jr. is heavy handed (when we first see Amanda at home, her bedside drawer is lined with the newspaper headlining her husband's killing) and enamored of filmmaking flourishes that undermine his drama. Jackson's first words to Amanda, 'Tick, tock' are meant to remind us that he's running out of time, so Woodward references the phrase again during his violent climax. As Jackson looks at an ornate grandfather clock. In a cheap motel room. Right after having pulled out an engagement ring. Bruce Dern is made to utter the line 'Your job is to be Spider-Man and climb up second stories to do bad things.' The overly melodramatic score builds to a swell during a prison rape scene. There are so many head-slapping moments, it would take paragraphs to recount them all. Lyman-Mersereau somehow manages to eke out some sympathy, but he's been directed in such a black and white fashion (and lit that way as well) his character is like a lab rat. Support has been fleshed out with caricatures rather than real people. As the love of Jackson's life, Emma Rigby is notably in over her head, even in this production. In his first fictional role, New England Patriots tight end Rob Gronkowski may have a future portraying silent, stylish bodyguards in fashion spreads. "American Violence" entertains for all the wrong reasons. Grade: