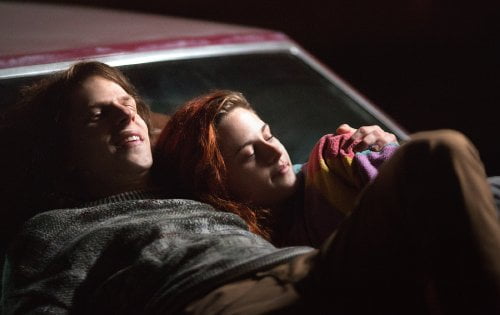 Cash & Carry stoner clerk Mike Howell (Jesse Eisenberg) is amazed by his girlfriend Phoebe (Kristen Stewart) who loves him despite his lack of ambition and frequent anxiety attacks, including the one he just had at the airport, failing to board their flight to Hawaii. Still waiting for the right moment to propose, Mike's small town world is turned upside down when a strange older woman shows up at his counter and insistently repeats a nonsense phrase, one which activates the sleeper agent's deadly skills so he can defend himself from an overreaching C.I.A. desk jockey's plan to deep six "American Ultra."

If nothing else, this vehicle from screenwriter Max Landis ("Chronicle") and director Nima Nourizadeh ("Project X") supports continued pairing of Eisenberg and Stewart as the two "Adventureland" costars project a relaxed, intimate style together. They're wonderful here, their characterizations taking on deeper meaning as Landis's script reveals more about their backgrounds. The film, which could be thought of as "The Maryjane Candidate," plays like an adaptation of a comic graphic novel (Landis's original script was inspired by the C.I.A.'s covert MK Ultra program) with its mix of romance, bongs, nefarious secret Government ops and extreme violence. The action outside Howell's West Virginia home might be cartoonish, but the lives inside it matter. He may not succeed entirely, but after his tone-deaf "Project X," Nourizadeh's genre juggling here works more often than not. With its affecting central romance enduring unimaginable violence from outside sources, "American Ultra" has a little drop of "True Romance" in its DNA. We kick off with a staccato inventory of absurd weaponry (dustpan, spoon, noodles, bear...) from a third act Mike's point of view before retracing our steps back to the beginning via his reverie on Phoebe. Mike clearly adores her and his number one goal is to find the perfect moment to propose. Phoebe's love, too, is in no doubt, although she's also clearly wrestling with his foibles, crying in the airport lounge as last boarding is called, gently urging him to make something out of his inventive Apollo Ape adventures. When they're pulled over on their way home, an incident that seems like the routine with Sheriff Watts (Stuart Greer, "Mud," TV's 'Rectify'), Phoebe just knows Mike's holding. Let's stop right here to mention Watts, a fairly insignificant character, but one who's imparted with history and a surprising depth of compassion and honor before he's gone. For every cartoonish character, like Topher Grace's chief villain Adrian Yates or John Leguizamo's admittedly amusing drug dealer Rose, we get someone with more depth than expected, like Connie Britton's C.I.A. handler Victoria Lasseter or Walter Goggins' (TV's 'Sons of Anarchy,' 'Justified') damaged assassin Laugher. But it is Eisenberg who really floats this boat with his stoner paranoia, sweet self doubt and impeccable comic timing. Landis includes a mini parable about a fast moving car which crashes into a tree and Eisenberg makes it a moving confession of his feelings of romantic inadequacy. He's dialed back his Woody Allenish neuroticism, cloaking it in stoner haze that makes it endearing. When he begins to kick ass, it's scary real, even if the weapon he's brandishing is a spoon. (Oddly, the violence appears to have been edited with a razor to avoid the 'R' rating it has, the action always cut one beat before going over the top). While the romantic obstacle is fairly easy to predict, the separation of the love birds proves good for the film's last act, especially as Eisenberg and Britton are paired to defend against an onslaught, Eisenberg's Mike venturing into confidence. The film's epilogue, while abrupt in smoothing over moral considerations, places Mike and Phoebe in a whole new sexy and startling place, one which could lead to further adventures. The film also stars Bill Pullman ("Independence Day") as Lassiter and Yates's boss Krueger and Tony Hale, recycling his 'Veep' role as a C.I.A. lackey. Grade: