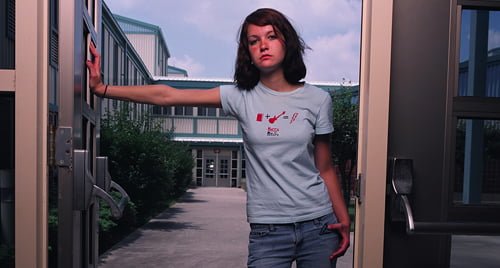 Writer/director Nanette Burstein ("The Kid Stays in the Picture") spent ten months filming the wealthy and white suburb of Warsaw, Indiana's senior high school class and follows five types - the basketball star, the nerd, the princess, the outsider and the guy who tries to cross those lines to form a collage of today's "American Teen."

Burstein's teenaged soap opera is perhaps the first theatrical documentary that crosses the line into what audiences have come to expect from Reality TV - omnipresent and unprecedented access. The five teens Burstein (and what must have been a massive crew for a nonfiction film) follows apparently have a camera in their faces nonstop for almost a year, as do those who react to them and their actions. Is "American Teen," therefore, a true picture or one that has been shaped, at least partially, by the cameras that record it? To Burstein's credit, none of her subjects back away from bad behavior. Rich kid Megan Krizmanich, the student council Vice President who rules the school, is not afraid to be photographed behaving badly, but does her starring role encourage diva antics? A friend rather foolishly sends a topless photo of herself to a boy and *cc's* another. This picture falls into Megan's lap rather quickly and soon enough the entire school's seen it (and Burstein's crew seems to capture every single student at the moment they do). To add insult to injury, Megan and her Kirstin Dunst lookalike gal pal Ali disguise their voices and leave phone messages on the girl's phone calling her a slut, much to Megan's best friend Jeff's disgust. Before the year's out, the friend is once again hanging in Megan's circle. I suppose in an age where teens post embarrassing pix of themselves on their myspace pages, that Burstein can capture this drama shouldn't be all that surprising. She's also there when alt rocker rebel boho Hannah Bailey is dumped by the boyfriend she's invested her whole emotional life in. This sets the young girl into such a tailspin she retreats from school. When she's on the verge of losing any credit for senior year she finally returns determined to keep her head down and focus on academics in order to move on to a college outside of Indiana, but the attention of Mitch Reinholt, a good looking jock from Megan's social circle, turns that head. (Burstein's camera is right on Mitch's face when he presumably first notices Hannah playing with her band on the school's stage - happy accident? planted idea? editing with hindsight?) The film also follows Colin Clemens, the school's basketball star from one of the few family's who cannot afford his college fee (dad Gordy is an Elvis impersonator!). He's under pressure to perform for college scouts, and in the process forgets to be a team player. Of all the film's subjects, nerd Jake Tusing is the easiest to route for. Determined to acquire a girlfriend, Jake targets Lauren figuring the new girl in school won't know his status as a nobody, which proves right - for a time. As in "The Kid Stays in the Picture," Burstein uses a few cinematic tricks to goose up her film, visualizing Hannah's depression with a tableau of creepy doll heads, making ironic commentary on Jake's romance with music ('Love Is in the Air'). Animating blades of grass is just too show offy for the material, though. The film wraps with the two climatic rites of senior year - prom and graduation - then concludes with a one year later check on its five subjects. Megan finally seems embarrassed by some of her on screen behavior, claiming a leap of maturity since entering college. "American Teen" is certainly entertaining, but what is it? If "American Teen" is a documentary, how much longer will it be before "Girls Gone Wild" is reclassified?