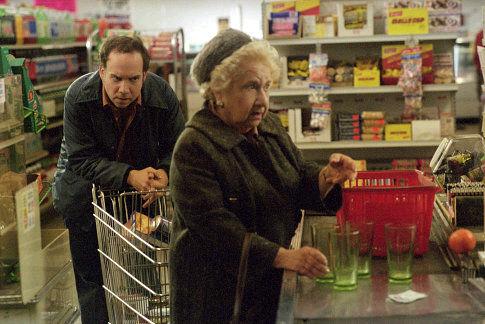 When a depressed Cleveland VA Hospital clerk drops papers from the 'deceased' folders he was about to file, he sees paperwork for a man who was born in Cleveland, worked as a file clerk, and died in Cleveland. This small event, combined with having seen his friend Robert Crumb (James Urbaniak, "Legally Blonde 2: Red, White and Blonde") become a minor celebrity in San Francisco as a cartoonist, inspires Harvey Pekar (Paul Giamatti, "Big Fat Liar") to create his own underground comic book, "American Splendor."

"American Splendor" was heralded with the Grand Jury prize at Sundance and awarded the FIPRESCI Award at Cannes for its innovative melding of fictional representation, reality (Harvey Pekar and his wife Joyce Brabner narrate and comment on the action, sometimes from within the same frame as the actors) and comic book conventions, but essentially the film is about an underachieving drone who has gained certain levels of fame as his loser status has come in and out of fashion. The husband and wife directing team of Robert Pulcini (who appears on screen as Bob the director) and Shari Springer Berman (who is heard off screen as an interviewer) may have taken a unique approach to Pekar's story, but their subject is so generally glum and his world so familiar from the recent "Crumb" and "Ghost World" that it only takes off intermittently. The film begins with a young Harvey (Daniel Tay) determined to trade his own identity for treats on Halloween. By 1975, he's being dumped by his newly PhD'd wife, unable to communicate with a voice he's been told needs months of rest. Like "Ghost World's" Seymour, Harvey lives in a dingy abode with the records he collects stacked on sway-backed shelves ready to accept any woman who would have him. He begins to write down downtrodden snippets of his life - unwinnable arguments with Mr.Boats (Earl Billings, "Antwoine Fisher") from work, commentary on little old Jewish ladies at the supermarket - and shows them to a visiting Crumb who surprises him by offering to illustrate them. A small cult-level success garners him a letter from fan and comic book store owner Joyce Brabner (Hope Davis, "The Secret Lives of Dentists") who he begs to pay him a visit ('Man, she's got good looking handwriting'). Joyce turns out to be a hypochondriac reformer and Harvey's match - they marry within a week. Paul Giamatti, who doesn't really resemble Pekar (Christopher Lloyd may have been a better physical match), does a wonderful job playing him nonetheless. Despite Harvey's combative nature (which lost him a long running association with David Letterman in the 1980s), the actor brings poignancy to a man who complains about his wife in her presence and misses her in her absence. In the film's best scene, Pekar runs into an old college classmate, Alice Quinn (Maggie Moore, "Hedwig and the Angry Inch"), at a local bakery. Their conversation is full of 'what might have been' and Giamatti's playing of it adds more depth to the character than we get in any other five scenes combined. He also has a wonderful soliloquy once again ruminating on identity. Against a false background, Giamatti discourses on the other Harvey Pekars he has found in the phone book. The real surprise of the film, though, is Hope Davis, who is utterly hilarious in her blank faced seriousness of purpose. "I can spot a personality disorder a mile away" she proclaims before opening the door to Harvey's buddy Toby Radloff (Judah Friedlander, "Showtime") - "borderline autistic." The joke is, of course, that's she's completely right and Friedlander's performance is validated by Radloff's real presence. (Toby Radloff had brief fame by association when MTV decided to run a series of 'loser' spots.) The directors ("Off the Menu: The Last Days of Chasen's") and their production designer Thérèse DePrez ("Hedwig and the Angry Inch") introduce the real Harvey sitting almost suspended against a white background - a blank page - surrounded by his things. He answers questions while actors walk off scenes into his space. Later he is joined by wife Joyce and his old Letterman footage is edited in (Giamatti appears in the back stage scenes) to relay that part of his history. Split screen and other comic panel effects are used. Things get most surreal when Giamatti and Hope as Pekar and Brabner travel to L.A. to see a play of "American Splendor" with Pekar and Brabner portrayed by Donal Logue ("The Tao of Steve") and Molly Shannon ("Superstar"). After Joyce gets Harvey through cancer by writing their story in graphic form as "Our Cancer Year" and they adopt the child, Danielle (Madylin Sweeten, TV's "Everybody Loves Raymond"), of that book's illustrator Fred (James McCaffrey, "The Truth About Cats and Dogs") the patched together family are seen celebrating Harvey's retirement from the VA Hospital job he never left. A copy of "Our Movie Year" (which has already been excepted in Entertainment Weekly) is prominently displayed. Harvey Pekar's passing the cup once more for being Harvey Pekar, American Everyman.

In 1976 Cleveland native and Veterans Administration file clerk Harvey Pekar conceived a unique idea - create a comic book not about super heroes and monsters from outer space but about the average schmuck in a working class world. To Harvey's surprise, his comic is a cult favorite as he tells it as he sees it in "American Splendor." Filmmakers Shari Springer Berman And Robert Pulcini base their story on the life and work of Harvey Pekar and do so with an unusual mix of fiction, fantasy, documentary and animation. Paul Giamatti takes the lead for the first time and plays the grumpy observer of life as he goes through yet another divorce because of his sloppy ways and negative attitudes. A fortuitous meeting with counter culture comic genius Robert Crumb (James Urbaniak) sparks an idea in Pekar and he decides that he, too, can create a cult sensation - about himself. Things start small for Harvey - he can't draw worth a damn - but Crumb reads his stories, likes them and volunteers to do the illustrations for the comic book. The combo of Harvey's everyman stories and the superb animation work of Crumb establish the books, named American Splendor, as an underground hit. Meanwhile, grumpy Harvey continues to work at the VA and develops an initially long-distance relationship with a fan, Joyce Brabner (Hope Davis), who missed an installment of Splendor and contacted Pekar to try to get a copy. They eventually arrange a blind dates and romance, of sorts, ensues. They are soon married - despite Harvey's up front declaration that he has had a vasectomy. The following years see Harvey sell his comics to Random house for an anthology, appear several times on the old "Late Night with David Letterman," loses Joyce for a while when she run off to Palestine to research war zone kids. He also has a bout with cancer and adopts the daughter of an artist friend. Harvey, for all his doom and gloominess, leads a full life. I have a problem with the structure of "American Splendor" as it moves from present day narration by the real Harvey, often on camera, not just voice over. The abrupt shifts from these modern day segues with real Harvey and real Joyce to the fictional story that span's the comic author's life as a child growing up in Cleveland, his career in civil service, the creation of Splendor, his marriage to Joyce, battling cancer and raising a child. The transitions become more difficult when the 'makers include the real appearances on Letterman. While Giamatti does and excellent job in portraying Pekar, the sudden shift from fiction to actual Letterman shows took me out of the flow of Harvey's life story. One clever aspect of "Splendor" is the introduction of the cartoon Harvey as drawn by Crumb and other comic artist who did the illustrations and depictions of Harvey. In one scene, when Joyce is waiting to meet Harvey for the first time, she looks around the train station waiting room and imagines the various cartoon Pekars - the stinky slob, the sensitive handsome guy and Harvey as he really is. It is one of the best scenes in the movie. Fortunately, the performances by the two leads are exemplary and deserve the critical notice being lauded upon the film. I have always liked Giamatti (he's a scream in "Big Fat Liar) and he really holds center stage when given the chance. Hope Davis is on a roll with her fine performances in "About Schmidt," "The Secret Lives of Dentists" and, now, in "Splendor." Her pragmatic portrayal as Joyce helps to temper the edginess of Harvey. The actress is developing an outstanding body of work. "American Splendor" could have been better if it didn't try to be too many things and gave the stars more screen time and the real Harvey a lot less. It is a solid, entertaining and imaginative work and shows us the life of an unusual character.