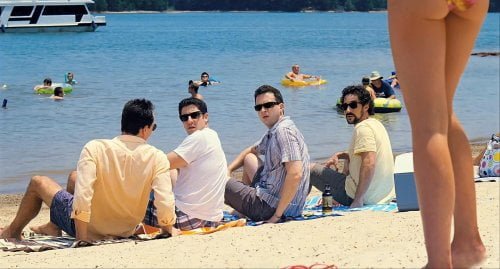 It's been thirteen years since Jim Levenstein (Jason Biggs) turned to pie to slake his lust or, as it turns out, since he's seen his old high school buds, so Kevin (Thomas Ian Nicholas) calls suggesting they all meet up, it's time for an "American Reunion."

"Harold and Kumar" writers/"Guantanamo Bay" codirectors Jon Hurwitz & Hayden Schlossberg take over the writing/directing reins for the "American Pie" series having given two of the original cast one of their only recurring roles since (Eddie Kaye Thomas and John Cho). In fact, given the large cast of 1999's entry into the teen sex comedy, it is notable just how many of them failed to make any kind of a name elsewhere. Eugene Levy was already a known quantity, Jason Biggs got one of Woody Allen's lesser works. Seann William Scott has had more stead work, but mostly in bad comedies and voice work ("Goon" proves to be the delightful exception). Chris Klein's name may be remembered, but the same can't be said for Thomas Ian Nicholas. Alyson Hannigan's spun the most success moving forward - on television ('Buffy the Vampire Slayer,' 'How I Met Your Mother') and Jennifer Coolidge's stint as Stifler's mom truly became a breakout. But Tara Reid and Natasha Lyonne both became infamous train wrecks and Mena Suvari's fame seems to have come and gone all in that same year. This fourth outing of the series has given them all another job and that's about the most one can say for it. The film starts with a slow pan of discarded clothing leading to a bouncing bed. Want to bet that bouncing isn't caused by vigorous sex? First gag falls flat. In fact they pretty much all do. It's a sad day when Stifler defecating in a cooler is one of a film's funniest bits. The only real laugh comes courtesy of Levy, who has a real knack with frank sex talk. He needs to talk to Jim, who, having recently become a dad, has seen his sex life with Michelle (Alyson Hannigan) evaporate (the fact that the film's major through line involves waiting for Biggs and Hannigan to get it on should tell you everything you need to know). Jim's dad needs some talking to of his own, having been unable to move on since losing his wife three years earlier, but it's too easy to see that the only reason the writers have widowed him is to cross his path with a certain iconic single mom. Reunion weekend involves Jim trying to avoid the come-ons of Kara, the girl next door he used to babysit, now an eighteen year-old hottie hoping to lose her virginity (so of course, she sets her sights on...Jason Biggs). Oz has become a minor television celebrity with an obnoxious model girlfriend Mia (Katrina Bowden, TV's '30 Rock') and when he runs into Heather (Mena Suvari) the spark reignites. She's with a heart surgeon (Jay Harrington, TV's 'Better Off Ted') who acts like a twelve year-old. Kevin is away from his wife for the weekend and is freaked out when he awakens from a drunk in bed with Vicky (Tara Reid) and Finch arrives on a motorcycle with tales of global adventure and hooks up with Michelle's old band camp friend Selena (Dania Ramirez, "X-Men: The Last Stand"). They all try to ditch Stifler (Seann William Scott), but the life of the party finds them. And they all learn how immature they used to be trying to go home again. The grossout gags are just gross and everything is painfully contrived, like the bit where the guys need to smuggle a drunk and half naked Kara into her parents' house. Neil Patrick Harris has an unrewarding cameo and Natasha Lyonne has one line. A surprise appearance from the star of a much better 80's teen comedy is used to close a loop, but the payoff isn't as much fun as it should be. Nostalgia is a funny thing, but let's not forget that "American Pie" really wasn't all that great to begin with. Reuniting its cast thirteen years proves completely unwarranted.