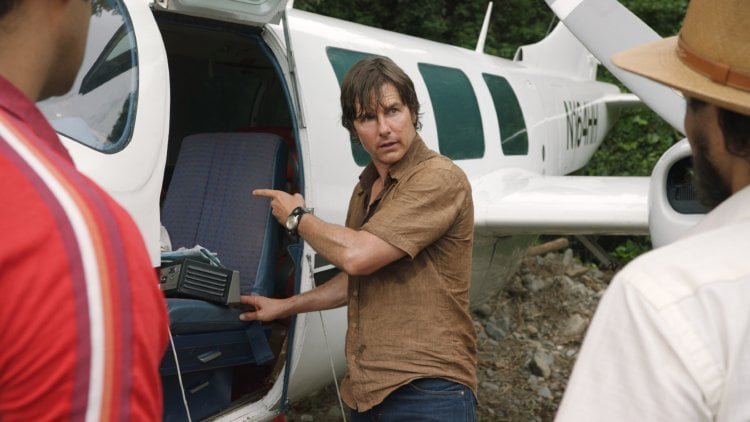 In the late 1970's, Barry Seal (Tom Cruise) had a great life. He was TWA's youngest pilot and had a beautiful wife and growing family. He was also an adrenaline junkie willing to engage in some minor law breaking, which brought him to the attention of the C.I.A., who recruited the daredevil for covert surveillance flights over Nicaragua. Soon thereafter, Seal was tasked with bringing AK47s to the Contras and recruited by drug kingpin Jorge Ochoa (Alejandro Edda) to fill his plane with cocaine on return flights. Seal was "American Made."

The 'cheeky' opening title card tells us Gary Spinelli's screenplay is 'based on a true lie,' and it is this flippant treatment that keeps the film from soaring higher. As played by Cruise, Seal is a wriggly charmer, that flasher of the megawatt grin, but there is no soul searching on the road from Cuban cigar smuggler to illegal war mongerer and drug runner. Director Doug Liman's ("Edge of Tomorrow") film plays out with the same high wire, trippy pace as "Goodfellas'" cocaine/helicopter sequence (the soundtrack even features a George Harrison selection) but while it is entertaining, the laughs undercut the severity of the scandal. (The film's production has its own scandal, the families of two pilots who lost their lives pointing at Cruise and Liman as encouraging increasingly dangerous stunts in additional, unplanned flying sequences - Cruise did his own flying in the film.) When (fictional) CIA operative Monty 'Schafer' (Domhnall Gleeson, "Ex Machina," "mother!") tempts Seal with the world's fastest twin engine plane, he asks if what he'll be doing is legal. The man who says 'he often leaps before he looks' is told sure, he's working with the 'good guys,' but he must tell no one and not get caught. Soon thereafter, he's a bagman for Manuel Noriega (Alberto Ospino) and Schafer's star's ascending for surveillance photos that 'look like mug shots.' As the 70's turn into the 80's, though, Seal's attracted attention from the DEA. With a police raid pending, Seal demands his wife and kids pack their belongings in the middle of the night. They're relocated to the sleepy town of Mena, Arkansas, where Seal's gifted with 2,000 acres including his own airport. Initially outraged, Lucy Seal (Sarah Wright) comes around when she sees a suitcase full of money (and is told about the CIA). The Seal family is beloved in the town of Mena as they share their riches with the community, the family's home so overstuffed with cash, Seal runs out of places to keep it. He's so busy running guns and coke, he hires additional pilots, a group of cowboys dubbed the Snowbirds. More trouble comes in the form of Lucy's brother JB (Caleb Landry Jones, "Get Out"), a pasty, entitled loudmouth. Liman, whose dad was the chief counsel for the Senate investigation into the Iran-contra affair, inserts the occasional clip of Reagan, including Nancy's 'just say no' address as the inept Contras sell their CIA supplied AK47s to the Medellín Cartel. Arkansas Governor Bill Clinton is also implicated when Arkansas DA Dana Sibota (Jayma Mays, TV's 'Glee') is frustrated in her attempt to bring Seal down (along with the DEA, ATF, FBI and State Police). But we're left to wonder about Mesa's Sheriff (Jesse Plemons, "Black Mass"), a character with little to do. In the end, the agency that enabled Seal's insane lifestyle paints a big target on his back. If the film owes its drug-fueled pace to Scorsese's "Goodfellas," it has perhaps modelled its antihero on the same filmmaker's "The Wolf of Wall Street." While often hilarious, that film illustrated the damage that was done. This one's content to trot out Oliver North (Robert Farrior). It does tell an incredible tale, but buyer beware. Grade: