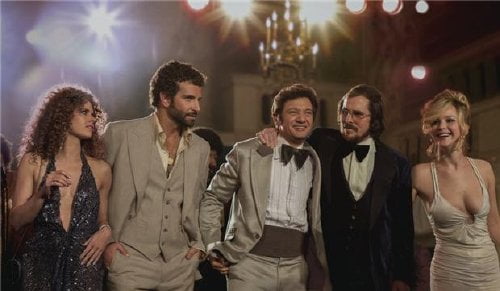 Irving Rosenfeld (Christian Bale) is an overweight con artist with an elaborate comb over. He and his beautiful partner in crime, Sydney Prosser (Amy Adams), are under the control of ambitious FBI agent Richie DiMaso (Bradley Cooper) and their elaborate scam on New Jersey mayor Carmine Polito (Jeremy Renner) is about to go terribly wrong. But, how they got there is the real story of “American Hustle.”

When paunchy, combed-over con man Irving Rosenfeld (Christian Bale) locks eyes with sexy Sydney Prosser (Amy Adams) at a pool party, there's an instant connection, sealed with mutual love for Duke Ellington's 'Jeep's Blues.' Sydney's ability to morph into sophisticated British Lady Edith is the con that takes Irving's loan scam/stolen art operation into a higher stratosphere, but it - and she - also draw the attention of FBI Agent Richie DiMaso (Bradley Cooper), who pressures the couple into a political sting operation in return for their freedom, an all around "American Hustle." From its degraded opening studio logos to Amy Adams's waist-plunging necklines, "American Hustle" revels in the 70's. Cowriter (with "The International's" Eric Singer)/director David O. Russell ("Silver Linings Playbook") gives his latest, loosely based on Abscam, a tone of cocaine-fueled conning that plays like an updated screwball romantic comedy version of "The Sting" structured like Scorcese's 70's set "Goodfellas." If O. Russell lacks the polished stylings of Martin Scorcese, he knows how to crank the best ensemble cast of 2013. The conning works on two levels full of complications. First, there's the love angle. Irving's married to bored Long Island emotional manipulator Rosalyn (Jennifer Lawrence) and while he's very attached to her son Danny, who he's adopted, his mistress Sydney is his soul mate. When Richie enters the picture, Sydney uses him for leverage, conning both men, while Rosalyn digs in her manicured claws to hang onto what she's got. Second is the business con which turns into a sting con before becoming another con entirely. Richie's so juiced by his big 'get' with Irving (including Irving's girl), his ambition grows by leaps and bounds - he's not just happy bringing down fraudsters, now he wants to play in the sexier arena of political scandal and Camden NJ Mayor Carmine Polito's (Jeremy Renner) dream of making Atlantic City a gambling mecca promises a lot of greased palms to slap. Irving's none too thrilled about this and neither is Richie's by-the-book boss Stoddard Thorsen (Louis C.K.), but Richie just climbs over their heads - and lands them in some pretty hot water when his fake enablement of Carmine's plan is sniffed out by the mob. But even the mob may not be as dangerous as the unfiltered and uninformed Rosalyn, who's crashed Irving's scam, drawn by his new circle of glitz and glamor. This is one highly entertaining film - even its production details produce chortles. The first sight we see is Irving, Bale having grown a protuberant paunch, arranging perhaps the world's most intricate comb over, complete with underlying hairpiece. Bradley's tight perm is another production. There's a profusion of hair curlers and moustaches here. Rosalyn's addicted to a specific Swiss top coat because she likes its fragrance - like flowers and garbage, - a metaphor for her husband's business. If Sydney's all sleek Halston and Diane von Furstenburg, Rosalyn's leopard print and big hair and her home decor favors foil wallpaper. speaking of hair, Renner's well-intentioned mayor sports something that might be called the businessman's pompadour an outward indication of his inner Sinatra. Director of photography Linus Sandgren's ("Promised Land") work isn't exactly elegant - some of his whip pans are dizzying - but it serves Russell's fast moving aesthetic. The film's soundtrack is a blast in the past, providing laughs with everything from Tom Jones's 'Delilah' to the startling use of an Arabic version of 'White Rabbit.' Lawrence is the first among equals, a Long Island princess of brassy vulnerability and tarnished silver tongue. The actress delivers many circumlocutions of fuzzy logic, convincing her audience(s) with sleight of hand (best is when she convinces Irving that a serious slip on her part was intended to motivate him). Despite his amusingly altered appearance, Bale is almost the straight man here, a confident and intelligent man tortured by his romantic dilemma and DiMasi's loss of control - he's equally believable smooth talking a mark or genuinely trying to do the right thing, much like the real friend he makes in Renner's Polito. Cooper's mania is infectious, his lack of vanity on parade. Amy Adams embodies the era's Cosmo girl yet runs deeper, the soulfulness in her eyes more and more apparent as she tortures her soulmate. Support just keeps on giving. Renner is fabulous as the New Jersey mayor with a love of his state, red sauce joints and glad handing, so good a guy we accept corruption as business as usual. Louis C.K.'s party pooper runs counter to everything else about Russell's film and his frustrated, always interrupted telling of his ice-fishing story leaves us wanting more. Danny Huston is magnetic (and mustachioed) as the mobster who provides Rosalyn with a shoulder to cry on. Elisabeth Röhm projects more "Goodfellas" vibe as the down-to-earth Italian pol's wife. As the FBI's Arab sheik decoy, Michael Peña's talents are under utilized, but he squirms well when a cameoing actor calls his bluff. Alessandro Nivola turns himself into a deadpan gag as the chief prosecutor ensnared by DiMasi's vision. So many years after "Three Kings" who would have through David O. Russell would become the modern screwball song and dance comedy king? "American Hustle" is joyously exhilarating.