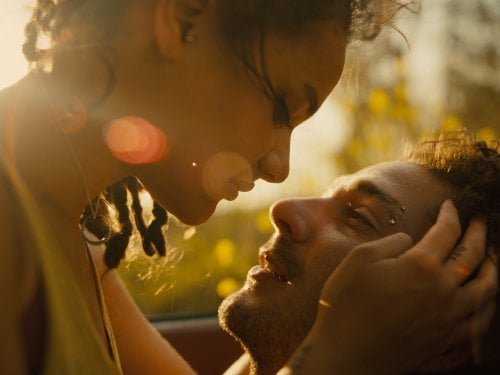 Teenager Star (Arnold's find, Sasha Lane) is out dumpster diving with her two young step siblings to put food on the table in the shabby Midwestern home she keeps for her drunken dad when she spies a high spirited bunch of guys traveling in a van. She's immediately drawn to one, Jake (Shia LaBeouf, "Transformers"), who gives her a flirtatious performance to Rihanna's 'We Found Love' on a Walmart checkout counter. He offers her a job with his 'mag crew,' so after depositing the kids with their reluctant mother, she hits the road and finds "American Honey."

With her fourth film, her first shot in the U.S., writer/director Andrea Arnold ("Red Road," "Fish Tank") has achieved something magical. "American Honey" is a slipstream of a movie, one which you hitch up to and get carried along in its glorious wake. It's a portrait of youth living on the edges of America, but it's full of love and hope and Arnold and her director of photography Robbie Ryan ("Fish Tank," "Wuthering Heights") find amazing beauty in rural Oklahoma, the oil fields of North Dakota and the mesa of Badlands country. People looking for a traditional movie should be warned that this almost three hour film doesn't have a destination other than self realization. The fifteen who comprise the mag crew are like a tribe whose chief is Krystal (Elvis's granddaughter, Riley Keough, STZ's 'The Girlfriend Experience'), a type of modern day Fagin who chooses their route, driving ahead in her white convertible, usually with top seller Jake. Krystal disapproves of romantic relationships among her employees whom she houses in cheap roadside motels, four to a single-sex room. She pairs Star with Jake for training, but she's suspicious of her newest recruit, her antennae up to their attraction. Star quickly falls into the group's rhythms including Corey's (McCaul Lombardi) traditional penis flash welcome and evening partying with singing and dancing, often with a bonfire and fireworks. But she has trouble adjusting to Jake's salesmanship, acted to appeal to his mark, a practice she finds dishonest. His sales go down and she scores by climbing into a car with three cowboys (Will Patton, Daran Shinn and Sam Williamson) who take her along to their poolside barbecue, buying hundreds of dollars of subscriptions on a dare over the worm at the bottom of a bottle of tequila. Star's deeply touched when Jake 'rescues' her. (Star will go off with strange men twice more, one a truck driver who asks a defining question, the other an oil field worker who pays $1,000 for a 'date,' neither harming her). The maternal quality we'd first seen in Star continues as she gifts the fragile Pagan (Arielle Holmes, "Heaven Knows What") with a ring Jake gave her and buys food for children left unsupervised by their strung out mother. Arnold travelled thousands of miles in pursuit of her story, even bunking in with a real mag crew. Most of her cast were found during her travels, including the mesmerizing Lane, a true beauty and natural actress. Lane creates a free spirit who wants to settle down and somehow makes both seem attainable. LaBeouf is a revelation here, a charismatic hustler who's met his match in Star. Their gentle romance is the film's greatest rooting interest. But although we may not learn all their names, each member of the crew makes a mark, one keeping a flying opossum as a pet, another a singer songwriter. There's genuine camaraderie in their van, a functional family who have each other's backs. The Canne's 2016 Jury Prize winner not only astounds visually but aurally, its sensational soundtrack featuring Rihanna, Southern hip hop and Lady Antebellum’s titular song. The English Arnold has created a pure piece of Americana like a miner panning for gold, finding beauty in the unlikeliest places. Grade: