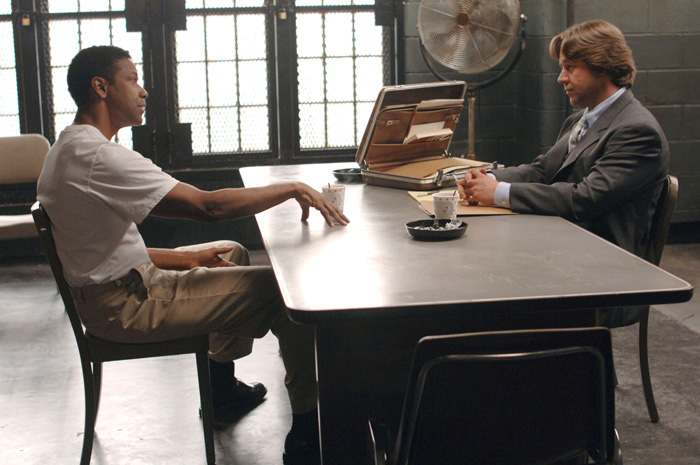 Frank Lucas (Denzel Washington) drives for Harlem’s most powerful criminal kingpin. When his boss suddenly dies, Frank seizes power and begins to build his own crime family by undercutting the Mafia hold on the illicit drug trade. Honest, outcast, streetwise cop, Richie Roberts (Russell Crowe), notices the change in the drug underworld power structure and it begins a battle between two men of integrity, though on opposite sides of the law, in “American Gangster.”

Vice squad Detective Richie Roberts (Russell Crowe, "Gladiator," "A Good Year") is an honest Jersey cop working with a corrupt New York City police department circa 1968. His partner, Javy Rivera (John Ortiz, "Miami Vice," "El Cantante"), is nervous about their survival and on the H. The high quality drug marketed as Blue Magic leads Richie to a surprising source, Frank Lucas (Denzel Washington, "Training Day," "Inside Man"), a black man more powerful than the Italian mob and a true "American Gangster." The main problem with director Ridley Scott ("Gladiator," "A Good Year") and screenwriter Steven Zaillian's ("Schindler's List," "Gangs of New York") "American Gangster" is that their mobster, Frank Lucas, just isn't that interesting. Except for some cooly ruthless acts of violence and some business smarts which are not elucidated until near the film's end, Lucas is kind of white bread. Here's a guy who goes gunning for a Puerto Rican beauty queen and wins her as a trophy wife, yet, in typical Denzel Washington fashion, never seems to lust for her. At least Russell Crowe gets down and dirty with his divorce attorney. The film plays like "Serpico" by way of "Scarface" if Tony Montana was an accountant. Crowe's Roberts is where the film's interest lies. He is a man whose job has destroyed his family life and whose uncompromising honesty makes him an outsider yet who maintains ties with a childhood friend who is a known Jersey mobster. Chief Toback (Ted Levine, "The Silence of the Lambs") lets him set up his own squad, amusingly done with a sales pitch from John Hawkes ("Me and You and Everyone We Know," HBO's "Deadwood") before they fade away to background, and Roberts tries to figure out just who is selling heroin that's twice as good as any other for half the price. Meanwhile, we've seen Lucas, the driver to a former Harlem mobster, use his mentor's wisdom and fly to Vietnam where he forges a direct deal for pure heroin, cutting out the middleman. (The filmmakers keep his transportation method as a 'surprise' for the film's climax, but I suspect most people remember the details. Lucas would have been far more intriguing if his operation had been spelled out all along.) His wealth established, Lucas then brings his mother (Ruby Dee, "Jungle Fever") and six brothers from North Carolina where he seems to expect they will flourish as big city drug kingpins. Besides the different business fronts the Lucas boys get, there is little to distinguish them and mom is an angelic hypocrite. Back to Roberts who is not only unraveling the Blue Magic mystery but is having to dodge Det. Trupo (Josh Brolin, "Grindhouse," "In the Valley of Elah"), a New York veteran invested in keeping Lucas in business. When Roberts finally prevails (in "Godfather" fashion, the drug bust is intercut with the Lucas family at Sunday services), we learn that when he passed the bar he became a defense attorney whose first client was Lucas! And that the two together exposed the corruption involving 75% of the New York Vice Department! Now that would have been a movie! Crowe turns in another fine performance as blue collar cop Richards, but Washington is too inscrutable. There's just not enough juice for a villainous role and we never really know what drives him. When the two finally face each other after almost two and a half hours run time, one is maybe supposed to feel the enormity of two Oscar winners on screen together for the first time like Pacino and DeNiro in "Heat," and while it is nowhere near that momentous, Crowe finally sparks some fire in his costar. Support is a staggering who's who list of actors, but few make any real impression. Brolin's having quite a year (and is still to be seen in the upcoming "No Country for Old Men") and sinks his teeth into his tough corrupt cop with more bite than Denzel does and Ortiz is sympathetic as Crowe's ill-fated partner, but too many more seem like cameos instead of characters. Cuba Gooding Jr. ("As Good As It Gets," "Daddy Day Camp") doesn't embarrass himself for a change as Nicky Barnes, but I can barely remember what his purpose was. As Lucas's mob contact, Armand Assante ("The Mambo Kings," TV's "Gotti") is slick but not sinister. Female support does not fare much better, although Carla Gugino ("Spy Kids," "The Lookout") is strong as Richie's wife and Melissia Hill makes an imprint as the head of Frank's cutting operation. Lymari Nadal (TV's "Battlestar Galactica") is a blank slate as Frank's trophy wife, though, and Ruby Dee is better than the saintly mother she's saddled with here. "American Gangster" isn't a bad movie, it's mostly a misnamed one, and if ever there's an opportunity to make a sequel that blows away its predecessor, this is it.

Ridley Scott, directing the script by Steve Zaillian (adapted from the Mark Jacobs article, The Return of Superfly), makes ponderous the story about two men - one a cop, the other a criminal – who share a code of ethics. Each story is broadly told, taking a lot of time (the film runs 158 minutes) to show both men’s integrity in the careers they have chosen. Frank runs his crime family (which includes his own family) with a business ethic that brooks no dissension. He goes up against the Mafia to take control of the drug business on his own turf. Frank is destined for a meteoric rise end equally fast fall. Richie is a rare thing in the late 1960’s and early 70’s NYPD – he is an honest cop. His fellow officers put up with his goody good ways – until he turns in a big stash of cash seized in a bust. The cash should have been “misplaced” and quietly distributed to the corrupt members of the police force. Richie's honorable, law-abiding act, though, makes him a pariah to his colleagues. He must work alone in his quest to find the new crime boss, Lucas, and bring him down. That is, until the Feds recruit him, also to get Frank. One word that comes to mind as a descriptor of American Gangster” is wooden. Another is plodding. There is no reason that this straightforward tale of two men on a collision course needs to push the 3-hour envelope. In fact, there is so much extraneous baggage attached to the story – for example, there is an extended musical interlude that can only be there to showcase the period Motown music – the film should have run two hours at most. A big problem is that neither Washington nor Crowe have more than two-dimensional characters. I should have cared, for different reasons, about each but their stories lumber along to an anticipated conclusion that holds no surprise. (Well, there is a bit of a twist in the film’s coda.) Also, a gangster movie of this scope, with dozens of supporting characters, should give us believable people. Just think about “The Godfather” and its long list of unforgettable characters. I forgot most of the supporting character (heck, I almost forgot the stars!) almost before I walked out of the “American Gangster” screening. Techs are very good, especially the first class period production design by Arthur Max. Editing is huge problem, making me wonder, as I watched the film, what Gangster” could have been in the hands of a different editor. The film has the feel of being edited by committee where they cannot come to a consensus on what to cut. Instead, they left way too much in. American Gangster” is a bloated crime tome that meanders far too much before it gets to its point. In addition, I did not care once I got there.