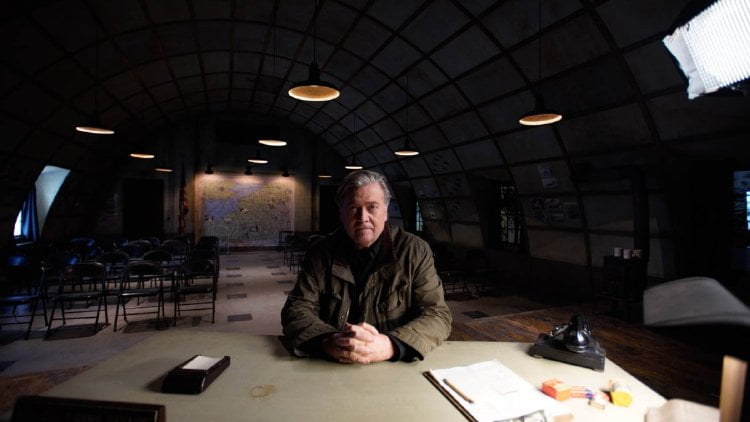 Eschewing his Interrotron for a one-on-one in a Quonset hut, director Errol Morris speaks with Steve Bannon in an attempt to both figure out how the man who exists now came to be and to challenge the contradictions in his stated philosophies in “American Dharma.”

While Errol Morris is one of our famous documentarians, his 2018 film didn’t receive the type of widespread theatrical release he usually enjoys, remaining undistributed outside of film festivals.  There are many reasons for this, but mistaking this for a bad film, or dismissing it out of hand because of one review out of Venice which excoriated Morris for being too soft on his subject would be a mistake.  Morris’s conversation with Bannon reveals a lot and is, in fact, a more illuminating look at the man than last year’s “The Brink.”

We learn immediately that Bannon, a former Hollywood producer and filmmaker himself, admires Morris’s work, most notably “The Fog of War” (it will be amusing later when Bannon recoils at Morris’s revelation that he voted for Hillary Clinton, unable to process that with the man who’d made that film).  Morris brings Bannon’s Hollywood background into the mix by using multiple classic film clips from movies which helped shape the man’s world view, beginning with “12 O’Clock High.”  His cutaways of Bannon walking about the tarmac outside the hut, including walking by mock facades, are perhaps intended to reveal these ideas as hollow, but those film clips, including one of Bannon’s own 2010 conservative ‘avant garde’ documentary “Generation Zero,” help to illustrate how the man learned how to manipulate the media.

Bannon’s the one who uses the term ‘dharma,’ which he describes as duty, fate and destiny.  But over the course of this conversation, what Morris exposes is a man who says one thing while doing another.  The filmmaker may not accuse in real time, instead choosing to cut to montages which make his point clearly.  Bannon may decry elites and champion the working class verbally, but he is one of the former (he was recently arrested on the yacht of a Chinese billionaire) and uses the latter (he delights in the troll army which formed in the comments section of Brietbart).  All we have to hear to know that the man is disingenuous is ‘I don’t think he’s corrupt’ when asked about Trump.  Every single one of the big actions he points to as part of the disruption he led – building a wall, getting back manufacturing jobs, etc. – has failed to come to fruition.

And Morris does get his barbs in, particularly on the subject of hate rhetoric, challenging the economic benefits the wall was supposed to bring with ‘Does anyone really think the wall will give them a job?  No.  They just hate Mexicans.’  Bannon’s assertion that neo Nazis are ‘bad guys’ who ‘should be shut down’ and who are ‘meaningless’ as regards Trump’s base speaks for itself.

The film ends on a riveting note as the filmmaker and his subject compare vastly different analyses of the ending of “Chimes at Midnight” in obvious comparison to Bannon’s banishment from the White House.  Morris follows up one of his initial questions about Bannon’s inclination for destruction and tearing things down by ending his film by literally burning it all down, his Quonset hut going up in flames.

Steve Bannon was a West Point graduate, independent filmmaker, chief executive of the 2016 Trump election campaign and his advisor on the National Security Council (until he fell from grace with his boss). Documentary filmmaker Errol Morris lets Bannon tell his sordid story in “American Dharma.”

I think that Errol Morris should have named his latest work, “The World According to Steve Bannon.” For the first three-quarters of his latest one-on-one interview, this time with Bannon as the subject, Morris gives the man free rein to tell his story and make his excuses for his support for Donald Trump. What I got most out of “American Dharma” is that Bannon considers himself a self-proposed warrior and king-maker with Trump as his monarch of choice.

As the self-aggrandizing document unfolds, Bannon sees Steve Bannon as the noble warrior for the Trump cause. He is obviously an educated man and not stupid. But, I question whether he really believes the bullshit drivel spouting from his mouth as he tries (and, in my mind, fails miserably) to justify his support of the person who is the most dangerous man in America, if not the world.

Errol Morris does ask some sharp questions in the last quarter of the film, taking Bannon to task on his many “beliefs” on what he has done. I wanted more answers and less glossing over and excuse-making by the monarch-maker.

This era of Covid-19 has overshadowed that of the Donald Trump era, showing the man to be a failure: in leadership, in morals and in caring for the American people. Errol Morris lets Steve Bannon hoist himself on his own petard in his support of a failure. It is funny how someone on the right hand of power can so fall from any possible grace, especially from the graceless so-called “leader of the free world.”