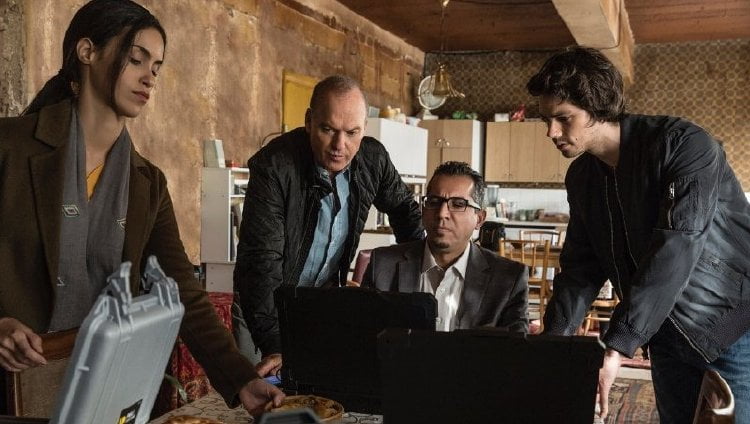 At a picturesque beach resort, Mitch Rapp ("The Maze Runner's" Dylan O'Brien) proposes to his girlfriend Katrina (Charlotte Vega) as they frolic in the sea, then heads ashore to order up celebratory drinks. The scene devolves into horror as terrorists storm the beach, shooting tourists fleeing for their lives. But Rapp survives and the terrorist incident has created an "American Assassin."

This popcorn shower of a movie, adapted from Vince Flynn's novel by Stephen Schiff ("Wall Street: Money Never Sleeps"), Michael Finch ("Hitman: Agent 47") and "The Last Samurai's" Edward Zwick & Marshall Herskovitz doesn't waste its time on little things like believable character motivation and ability, yet director Michael Cuesta ("L.I.E.," "Kill the Messenger") delivers brutal, believable fight sequences and one corker of a climax. Stepping up from YA adaptations, O'Brien, despite his character's super human self-training regimen, proves he's quite capable in an adult role. Determined to wipe out those who stole the only thing that mattered to him, Mitch inveigles himself into an ISIS-like Libyan camp for induction by his primary target, only to witness its devastation by CIA black ops. He's been being tracked by CIA Deputy Director Irene Kennedy (Sanaa Lathan, "Love & Basketball"), who recruits him and sends him for elite training with her dad's old war buddy, Cold War veteran Stan Hurley (Michael Keaton). But Hurley's not convinced, believing that the kid's emotional investment will eventually trip him up in a game where nothing is personal. But Rapp distinguishes himself and despite Hurley's objections, is teamed with the older man and fellow recruit Victor (Scott Adkins, "Doctor Strange") to meet up with Turkish agent Annika (Shiva Negar) in Rome in hopes of recovering plutonium that's made its way into the hands of a mysterious operative (Taylor Kitsch, "Lone Survivor") who has hired an Iranian physicist to build a nuclear warhead. It's that 'nothing personal' stance that everything hinges on, but the piece's villain's 'daddy' abandonment issues have spiralled into a revenge plot that is overkill of the highest order. There is some nicely shuffled three card monte involving Iran's Minister Behurz (Navid Negahban, "American Sniper"), General Rostami (Joseph Long, "Dracula Untold") and Hurley's informant Ashani (Mohammad Bakri), but the film essentially posits its hard core, barking Hurley as a guy trying to rein in his unruly children. Rapp consistently ignores orders but is consistently proven right in doing so. On the plus side, this is the type of action film that makes us feel its bruises, stabs and shocks and while the CGI-laden climax may not be at the cutting edge of technology, Cuesta goes big and doesn't disappoint. As the stunning agent who may not be just who she appears, Negar wins us over. Keaton chomps scenery to our delight ('Why does this kid give you such a hard on?' he barks at Kennedy), but his redeeming change of heart fails to convince. "American Assassin's" politics may be wonky, but its gritty action works. Grade: