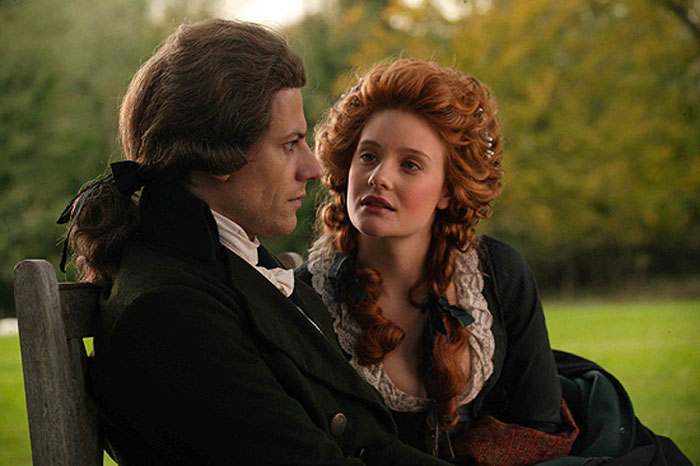 In 18th century Britain, William Wilberforce (Ioan Gruffudd, "King Arthur," "Fantastic Four") was the leader of the abolitionist movement who fought passionately to end the slave trade. Most members of Parliament were adamantly against this, believing that the economic stability of the British Empire depended upon it, but there were a few who dared support Wilberforce. One, William's minister John Newton (Albert Finney, "Big Fish"), was a reformed slave ship captain who made a public act of contrition by writing the beloved song "Amazing Grace."

While I'm sure many critics will trot out the old argument that this film stars a white man in a story about the black man's plight, they'll be missing the point of "Amazing Grace." This beautifully written (Steven Knight, "Dirty Pretty Things") film is many things, and while one of those is an indictment of the slave trade, it is not *about* the slave trade. This is the story of a man who refused to give up on his ideals, who maintained a strong friendship with a politically ambitious man without compromising and who found love with a liberal, independent spirit in 1797. Director Michael Apted ("Enigma," "Enough," "49 Up") frames his film with a flashback structure, but it is an atypical one. Editor Rick Shaine ("Enigma," "Enough") gives equal weight to past and present time and keeps the action moving forward in both. We're introduced to a sickly Wilberforce stopping in pouring rain to protest the ill treatment of a horse before arriving in Bath where he's been lured by good friend Henry Thornton (Nicholas Farrell, "Bloody Sunday") ostensibly to take the waters. Henry and wife Marianne (Sylvestra Le Touzel) are up to matchmaking, however, but despair when both Wilbur and Barbara Spooner (Romola Garai, "I Capture the Castle," "Rory O'Shea Was Here") reject the idea even as they secretly find common ground. Fifteen years earlier and we're set amidst very spirited debate in the House of Commons where the Duke of Clarence (Toby Jones, "Infamous") and Lord Tarleton (Ciarán Hinds, HBO's "Rome") sniff at Wilberforce's democratic ideas. He's encouraged, though, by friend William Pitt (Benedict Cumberbatch, the upcoming "Starter for 10"), who introduces him to like-minded underground movers and shakers Thomas Clarkson (Rufus Sewell, "The Illusionist," in one of his best performances), Hannah More (Georgie Glen, "Calendar Girls") and former slave Oloudaqh Equiano (Sengalese singer Youssou N'Dour). Through the years the group makes small inroads, gaining the support of Lord Charles Fox (Michael Gambon, "Harry Potter and the Goblet of Fire") and grassroots boycotting campaigns, but it is the wily council of James Stephen (Stephen Campbell Moore) that finally brings them hard won success. Besides the embarrassment of riches that is a 'who's who' of British acting talent, Apted's classy production boasts fine period reproduction and careful nurturing of the written word. Knight should be remembered at year's end for not only telling a compelling story, but for delightfully smart and witty dialogue that never feels unnatural in the actors mouths. From Jeremy Swift's ("Gosford Park," "Oliver Twist") poetry quoting butler to the arch observations of Prime Minister Pitt ('Why is it that you only feel the thorns in your feet when you stop running?'), Knight's script is a literary revel. Apted does let his film's energy deflate a bit in final acts, but he comes roaring back with a smart credit rollout that features The Irish Guards Pipe band playing the titular song outside Westminster Abbey, where both Pitt and Wilberforce are interred.

Composer-turned-documentary filmmaker Allen Elliott accessed the little seen footage shot by Sidney Pollack in what is, actually, a recording session rather than a music documentary. Do not get me wrong, "Amazing Grace" is a documentary of that iconic event – the album has sold over two million copies – but, to me, it is really all about her music. As I watched this well-shot "concert" movie, I found myself, repeatedly, closing my eyes and just listening to Aretha's magnificent voice at her peak. The original production, shot during those two nights in '72, was supposed to be released as a documentary back then. Technical problems forced Pollack to abandon the project, leaving it all locked up in a vault, until Allen Elliott took the reins. Even then, legal problems with Lady Soul kept the film under wraps until after Aretha's death last year. It is a project well worth the wait. "Amazing Grace" squarely hits its two targets: people, like me, who love Aretha Franklin and her music; and, any fan of gospel music, which is wall to wall in this succinct 90 minute tome.