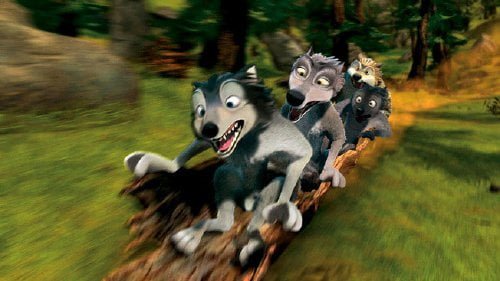 Kate (voice of Hayden Panettiere, TV's "Heroes") and Humphrey (voice of Justin Long, "Going the Distance") are two Northwestern Canadian wolves displaced by park rangers who ship them off to Idaho. Kate is a serious leader who expects less than nothing from the fun loving Humphrey as they try to make their way home. Do opposites attract? Because Kate and Humphrey are "Alpha and Omega."

This film is the worst example yet for the use of 3D to drive up ticket prices. Directors Anthony Bell and Ben Gluck populate some decent looking scenery with Saturday morning cartoon wolves whose manes look more like Swiffer dusters than fur, then take the few concepts written by Chris Denk ("Shark Bait") and Steve Moore ("Open Season") and repeat them multiple times. The 'in memoriam' end title to Dennis Hopper, whose vocal work here registers his last performance, is an insult to the man. Humphrey is one of those Tramp like scamps who plays with his buddies but admires the lovely Kate. But Kate's hand has been promised by her father (voice of Danny Glover) to rival wolf leader Tony's (?!) (voice of the late Dennis Hopper) son Garth (voice of Chris Carmack) to join the packs. Kate doesn't think much of Garth, though (in the film's one amusing joke, his howl at the moon drops birds from the sky). There's a lot of blather about being bred to be an Alpha and how it is against 'the rules' for an Alpha to pair with an Omega. Of course, Kate's sister Lily (voice of Christina Ricci), an Omega, is Alpha Garth's true love match. If the filmmakers show one toboggan log scene, you can bet two more are coming. Two caribou stampedes are better than one. Kate and Humphrey's journey back from Idaho isn't very dramatic. The characters they meet there - a duck and a golf playing French Canadian goose - serve no purpose. There are too many anthropomorphic song and dance numbers (enough with these already!). "Alpha and Omega" is OK for very young audiences, but not for a ticket price that exceeds the cost of the eventual DVD. It's a wonder how material this bland and uninspired attracted the talent it did.