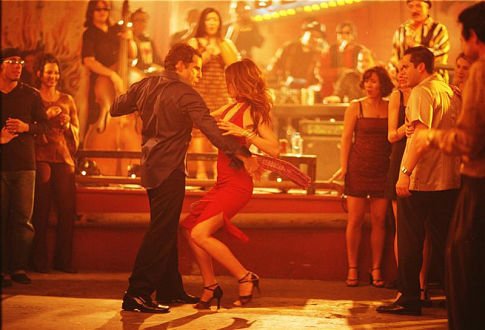 Reuben Feffer (Ben Stiller, "Zoolander") is so averse to the unplanned that he makes his living as a risk assessor for an insurance firm, but then "Along Came Polly."

John Hamburg ("Safe Men"), cowriter of Stiller starrers "Meet the Parents" and "Zoolander," also takes up the directorial reins for "Along Came Polly," an OK romantic comedy goosed up by supporting players Alec Baldwin, Hank Azaria and Philip Seymour Hoffman. Jennifer Aniston shows off her comic chops as Polly, while Stiller continues with his brand of physically clinched characters who always seem to have major bathroom mishaps. The film's first scene immediately establishes Feffer's anxietal paranoia and his best buddy's schlumpy charm. Reuben, neatly attired in a black tux, inspects his wedding reception hall, noting that candles have safely been replaced with table lamps, but horrified that the floor has been waxed. Best man Sandy Lyle (Hoffman), wearing a tux like an unmade bed, promptly takes a dive on the polished floor and confesses to the caterer that, yes, he is the famous child actor who starred in "Crocodile Tears" and to watch for his upcoming 'E! True Hollywood Story.' After an embarrassingly crude toast by his boss Stan Indursky (Alec Baldwin, "The Cooler"), Reuben and his new wife Lisa (Debra Messing, TV's "Will & Grace") are off to honeymoon in St. Barts, but on day one Reuben stumbles upon her doing the nasty with French nudist scuba instructor Claude (Hank Azaria, "Shattered Glass," looking very chiseled). To make matters worse, Reuben returns to New York to discover that his mom Vivian (Michele Lee) has relayed all the details to friends and coworkers. Lyle tries to cheer Reuben up by dragging him along to an art gallery opening and Reuben runs into old junior high schoolmate Polly Prince (Aniston), a waitress who specializes in refilling white wine drinkers' glasses with red. Polly, for cheesy psychological reasons revealed late in the film, is everything Reuben is not - adventurous, spontaneous and indecisive. After a series of horrendous dates involving toilet overflows, overbearing moms and spicy foods, Reuben is not only ready to take a walk on the wild side, but to salsa! Hamburg's script is weak in the center, but its embellishments (some of which are possible ad-libs) are enjoyable. It stretches belief that Polly would give Reuben as many chances as she does and a subplot about insuring billionaire Leland Van Lew (Bryan Brown, "Gorillas in the Mist"), an Xtreme sports nut, isn't successfully integrated. Hoffman makes the most of this material with a richly defined supporting character who offers dubious romantic advice while assuring Reuben that 'I'm your wingman.' Hoffman physically works the role, playing exuberantly bad basketball, shuffling out of a room ('I just sharted' - a new word is coined, for better or worse), taking over the lead role of a Hell's Kitchen Community Theater production of "Jesus Christ Superstar" or making just lolling about funny with perfect placement of limbs. Azaria is tons of fun working a cliched French accent to the hilt, just as Baldwin flaunts New Yawhese ('that hoah wife of yours'). Bryan Brown, in his first Hollywood film in ten years, has some fun as the loonily undeterred base diving, boat racing, shark swimming nutcase who even manages to knock out a tooth playing racquetball. In smaller roles, Michele Lee and Bob Dishy are just right as Reuben's aggressive mom and passive dad, but talents like Missi Pyle ("Big Fish"), Cheryl Hines (HBO's "Curb Your Enthusiasm") and Caroline Aaron ("Pumpkin") are overqualified for their minuscule roles here. Aniston steams up the salsa floor and has fun 'liberating' Reuben by starting an attack on his decorative pillows, but the character is always a little too ditzy and unfocussed. She's also saddled with an accessory pet (Rudolfo, a blind ferret) that's too reminiscent of "Something About Mary's" dog and "Meet the Parents'" cat. Stiller, whose best scene is a triumphant salsa dance which he makes geekily awkward and slick at the same time, never succeeds in making Reuben appealing, a serious drawback for a romantic lead. Besides the story problems, "Along Came Polly" is often edited (William Kerr, "Undercover Brother" and Nick Moore, "Love Actually") to get the gag without allowing the slack that would make the scenes play more naturally. Otherwise the production is polished, including a wide variety of soundtrack selections (Simple Minds' "Don't You (Forget About Me)" from "The Breakfast Club" being the most well placed). "Along Came Polly" is worth seeing for Hoffman, Azaria and Baldwin, but the central storyline is too weak to be held together by the gilt threads that adorn it.

Insurance company risk assessment specialist Reuben Feffer (Ben Stiller) is a happy man as he marries the woman he loves, Lisa (Debra Messing), and they head off to St. Bart’s for their honeymoon. His idyllic life gets cut short when Lisa falls for a muscular French scuba diving instructor, Claude (Hank Azaria), and leaves Reuben after only a couple of days of wedded bliss. Despondent, Reuben returns, alone, to New York to pick up the pieces of his ruined life. That is, until he meets his polar opposite in “Along Came Polly.” This is the kind of routine and predictable romantic comedy that is better than it has a right to be, mainly due to its superb supporting cast. Ben Stiller does his usual insecure and uptight shtick as pathetic, overly cautious Reuben. With the exception of his riotous turn as “Zoolander,” Stiller has been doing the same character we’ve seen in “There’s Something About Mary” and Meet the Parents.” “Along Came Polly” has the usual bathroom gross out humor that we now associate with Stiller and, as usual, there is a small furry animal, too. To the film’s credit, instead of a cute little cat or dog, the critter in question is an aging, blind ferret named Rudolpho. Jennifer Aniston only gets to go through the paces as the title character, Polly Prince, a free-spirited adventuress who knew Reuben when they were in seventh grade. The pretty Aniston doesn’t have much to do besides feel bad for her friend and figuring out her next big escapade. Polly is such an opposite to Reuben that I had a hard time swallowing that she would even give him the time of day, never mind sex. Philip Seymour Hoffman, as washed out former teen actor Sandy Lyle, steals his portion of the show as Reuben’s boyhood best friend. The slovenly Sandy lives in his glorious past and keeps trying to relive his earlier fame – to amusing affect, especially when he tries to muscle his way into the lead of the Hell’s Kitchen Community Center staging of “Jesus Christ Superstar.” The rest of the supporting cast does good work, too, with Michelle Lee putting an interesting, if unlikable, spin on her perf as Reuben’s thoughtless mother. Veteran character actor Bob Dishy is Feffer’s father of few words who comes up with the film’s best advice in the end. Alec Baldwin, as Reuben’s boss Stan Indursky, is rehashing the mensch boss character he has used to such good stead in “The Cooler,” but here it is just a rehash. Hank Azaria, sporting a buff bod and OUTRAGEOUS French accent, is given too little screen time as Lisa’s impromptu amour. Debra Messing has the thankless job as the unsympathetic wife who cuckolds her brand new husband. Aussie actor Bryan Brown is amusing as adrenalin-junkie billionaire Leland Van Lew who is trying to get millions of dollars of insurance from Reuben’s company – this subplot is little more than a distraction, save for Brown’s amusing charm. Director John Hamburg marshals his forces on both sides of the camera with a deft though not too imaginative hand. Seamus McGarvey’s lens work is clean and straightforward. The rest of the techs suit this kind of film uneventfully. This opposites attract tale doesn’t cover any new ground and holds few surprises. But, the quality of the cast and the frequent bits of humor – I even chuckled a time or two – help make this a bit better than average.