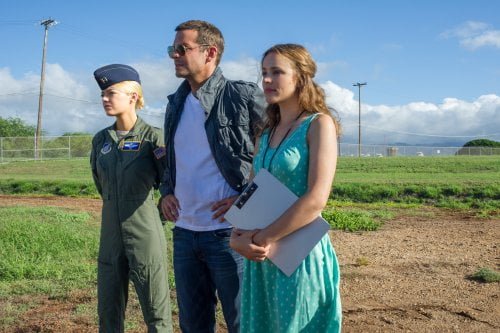 Brian Gilcrest (Bradley Cooper) is a hot shot contactor assigned to a top secret mission in Hawaii. When he arrives, he sees his lover from 13 years ago, Tracy (Rachel McAdams), and is then assigned Captain Allison Ng (Emma Stone) as his Air Force liaison during his stay on the island in “Aloha.”

When disgraced military contractor Brian Gilcrest (Bradley Cooper) gets a second chance working as a liaison for Global One billionaire Carson Welch (Bill Murray), he's sent back to his former AFB in Honolulu where ex-girlfriend Tracy Woodside (Rachel McAdams, "The Notebook"), whom he hasn't seen in thirteen years, stands on the tarmac in "Aloha." Writer/director Cameron Crowe ("Almost Famous," "We Bought a Zoo") used to make classic films like "Say Anything" and "Jerry Maguire," but beginning with 2005's "Elizabethtown" (and some would say 2001's "Vanilla Sky"), he seemed to lose his way. His latest, "Aloha," features one of the former rock critic's distinctive soundtracks but has the feel of a longer running movie that's been gutted in an attempt to fix it, with much of what' been left making little sense. To Hawaiians, the word Aloha means much more than hello or goodbye. It stands for a way of life, one of truthfulness, harmony and humility. Brian Gilcrest has lost his way and can only forge a future, represented by Senior Captain/Major Select Allison Ng (Emma Stone), a one quarter Hawaiian F-22 pilot assigned to be his watchdog, by making peace with his past. In order to build his launch site, Carson needs the land currently deeded to the indigenous Hawaiian movement, a perfect job for Brian as its leader, Dennis 'Bumpy' Kanahele (playing himself), a descendent of legendary King Kamehameha, is an old friend. Brian's not happy to be dogged by Ng, but she proves an invaluable asset, and a deal is struck over a luau and her accompaniment to slack-key guitarist Ledward Kaapana's rendition of 'Waimanalo Blues.' After a shaky start with Allison (he overhears her describing him as a 'sad urban coyote'), Brian has an equally unsettling dinner date at the home of the Woodsides. Allison blends right in but Tracy, who's never had closure with the man she regarded as the love of her life, immediately confesses to marital stress with 'Woody' ('The Office's' John Krasinski), a man who never speaks his feelings. Her ten year-old, Mitchell (Jaeden Lieberher, "St. Vincent"), keeps talking about a Hawaiian myth that's obviously meant to parallel Brian (although I, for one, could never make sense of it). Then there's her twelve year-old Grace (Danielle Rose Russell, "A Walk Among the Tombstones"), a young beauty with a mean hula and potentially problematic progeny. There are enough small moments here to illustrate what might have been, like the wordless communication between Brian and Woody, Ng's 'dance with the devil' cutting the rug with Welch at the Officers Club Christmas party and Bumpy Kanahele's effortless screen charisma, but some shaggy editing and too many false moves - particularly the ridiculous climax and tone deaf epilog - deep six the film. Stone's performance is all over the map, her cartoonishly clipped military delivery abandoned, giving way to wide-eyed Hawaiian stridency that's just plain odd coming from a freckled blonde. McAdams is more consistent. We can see the actress using the shakeup of her ex-lover's presence to address her insecurities, just as Krasinski takes a gut punch to express his feelings. One never really gets a handle on Gilcrest, though, Cooper playing too likable to convince of darker motives. Murray is miscast, Alec Baldwin's four star general barks and Danny McBride and Bill Camp's characters barely register. "Aloha" was supposed to be a romcom love letter to Hawaii, but instead it's a confused mess that never hangs together. I still don't know what mana and the Menehune mean. Grade:

As I left the theater, I gladly said aloha to “Aloha.” Writer-director Cameron Crowe has had a successful career as a filmmaker from his early wunderkind days with “Jerry Maguire” and “Almost Famous.” He took some notable stumbles with films like “Vanilla Sky” and “Elizabethtown,” but, with “Aloha” he takes a bad fall. It is hard to explain the story of “Aloha.” That is not because it is a complexly woven story – it is not. What it is is a mess of loose story threads, unconvincing dialog, maguffins galore and a waste of good talent. “Aloha” feels like a film that has sat on the shelf and been butchered in the editing room to get its release. The result is a film without heart and soul. The characters are wooden and barely achieve two-dimensions as the story plods to its just plain silly finale. One would think, with A-list stars like Bradley Cooper, Rachel McAdams and Emma Stone and a supporting cast including Bill Murray, Alec Baldwin, Danny McBride and John Krasinski and the King of the Nation of Hawaii, Bumpy Kanahele, that we would have a sure fire hit. Think again. There is virtually no chemistry between the lead characters, something that dooms “Aloha” to be less than mediocre. Well, at least everyone got a paycheck.