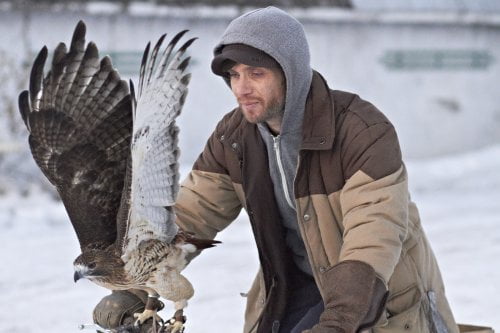 A woman (Jennifer Connelly, "Noah") boards a truck with her two young sons, one of whom carries a hooded falcon. She arrives with many others, but only one will be picked by the color of their pebble dispensed by The Architect (William Shimell, "Certified Copy"). Her youngest, Gully (Winta McGrath), will not be chosen for healing, but the tragedy that befalls her eldest, Ivan (Zen McGrath), will change her life's path, causing a deep rift between mother and son in "Aloft."

Writer/director Claudia Llosa's (2009 Foreign Language nominee "The Milk of Sorrow") rumination on art and nature as healing tools is a pretty abstraction where supporting players come into sharper focus than its leads. Featuring a dour performance from Cillian Murphy ("The Dark Knight") as the grown up Ivan and a frustratingly ambiguous character from Connelly, "Aloft" never takes wing. After the extended opening sequence, we jump ahead twenty years. Jannia Ressmore (Mélanie Laurent, "Inglourious Basterds") arrives at Ivan's home to get a gruff welcome from his wife, Alice (Oona Chaplin, "The Longest Ride"), who tells the reporter to head to a shed behind the house. There she startles Ivan, who'd forgotten their appointment for an interview she says she's making on hybrid falcons, his specialty. When she asks a question about his mother he immediately shuts down and throws her out. Returning to his house, he yells at his wife for 'accepting' a disk Ressmore left for him, but when he sees what's on it and thinks he knows her real agenda, he insists on accompanying her into the Canadian Arctic, leaving his wife and young child behind. Llosa then flashes back to pick up where she'd left off as Newman, aka The Architect, traces Ivan's mother to a pig farm to tell her that it was she, not he, who performed the healing on that fateful day, consoling the young boy Newman had taken into a manmade branch cave after Ivan's falcon swooped in. But Nana Kunning clearly has no regard for this man, having only turned to him as a last resort. (She's also reintroduced engaging in an affair with her married boss for no discernible reason.) Nonetheless, she pays him a visit and when she sees the improvement in that boy for herself, Nana becomes his protege. There is more compelling drama in the family dynamic of the impoverished widow whose father-in-law Ike (Peter McRobbie, "Lincoln," "Inherent Vice") tries to compensate for her neglect of Ivan in favor of Gully than in any of Llosa's mystic symbolism. Jannia and Ivan's trek across a frozen lake takes up a lot of screen time in service to Ivan's second, deeper childhood tragedy, Laurent nothing but a plot driver. The climactic meeting between mother and grown child yields nothing but anger we've already seen over a choice that makes no sense. The most sympathetic characters in the film are Chaplin's Alice, a woman bristling against her husband's long-standing funk, and McRobbie's Ike, a grandfather with more kindness and wisdom than any of the main players. "Aloft" also gets points for cinematographer Nicolas Bolduc's ("War Witch") naturally beautiful shots of unusual landscapes and soaring hawks. Grade: