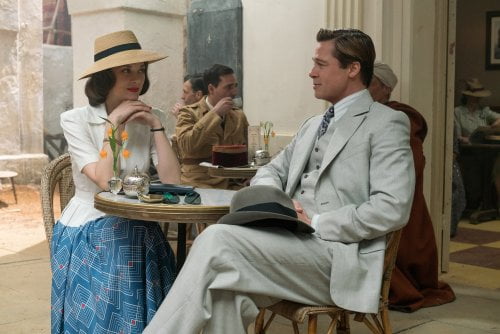 It is 1942 when Canadian airman Max Vatan (Brad Pitt) parachutes into the French Moroccan desert. He's picked up by a driver (Vincent Ebrahim), who hands him a wedding band and tells him what his wife will be wearing that night in Casablanca. Max has never met Marianne Beauséjour (Marion Cotillard), a famed French resistance fighter, who has been paired with him to assassinate the German ambassador. By the time their mission is completed, they will be politically and romantically "Allied."

Director Robert Zemeckis ("Cast Away," "The Walk") aims for a throwback romance based on screenwriter Steven Knight's ("Locke," "Burnt") take on the 'intimate betrayal rule' he heard had affected two WWII spies. Zemeckis's production is often lovely, but he errs on the side of over glamorization while Knight's concocted story plays like "Casablanca" crossed with an upended "Notorious" without holding a candle to either. "Allied's" best asset is Cotillard, although even she can't make desert target shooting attired in the most stylish khaki silks appear plausible. When an elegantly attired Max walks into a nightclub, Marianne's 'friends' are all struck by the lucky couple, but when the two are finally alone to make their actual acquaintance, Max is cool, believing that those in the field shouldn't give in to feelings. Marianne, on the other hand, is clearly thinking seduction, affectionately dubbing Max 'her Quebecois' due to his dangerously inaccurate accent. Impressed by her shooting skill and the realization that they might not live out the next day, Max gives in to desire, cinematographer Don Burgess's ("Cast Away") camera swirling around their car as windswept sand obscures our view. Some may swoon, others may giggle. When their personal D-Day arrives, Max and Marianne sweat it out as the time of their planned distraction threatens to outpace the late ambassador's arrival, but their mission is accomplished in a whole scale slaughter. As they make their escape, Max suggests Marianne join him in London and become his wife. They settle in a picture perfect neighborhood with their baby daughter (born out on the street during an air raid, which immediately ceases with the child's first cry). Max and Marianne's life seems blissful until Max is called in by his superior, Colonel Frank Heslop (Jared Harris, "Lincoln," "Certain Women"), informing him they have reason to suspect Marianne is actually a German spy. An S.O.E. Official (Simon McBurney, "The Conjuring 2") informs him that they will use a 'blue dye' test, Max to plant false information to see if it returns over foreign channels. Should their suspicions prove true, it will be up to Max to execute his wife or be hanged for treason. The film's gloss extends to Pitt, who appears to have been 'Benjamin Buttoned,' the apparent digital facelift petrifying the actor's subtler emotional range. As the film twists and turns in its final act, even Cotillard is undone by a subtext of self-preservation the screenplay never addresses. The supporting cast is an odd mix of throwback character actors (August Diehl's Hobar, Camille Cottin's Monique, Marion Bailey's Mrs. Sinclair, Anton Lesser's jeweler) and the jarringly modern (Lizzy Caplan as Max's sister). The production itself is often glorious, beautiful period reproductions rendered in a nostalgic glow, Cotillard's costuming stunning. So many of the right pieces were in place here, but "Allied" just doesn't add up. It's a melodramatic romance that might be just right for a lazy, rainy day. Grade: