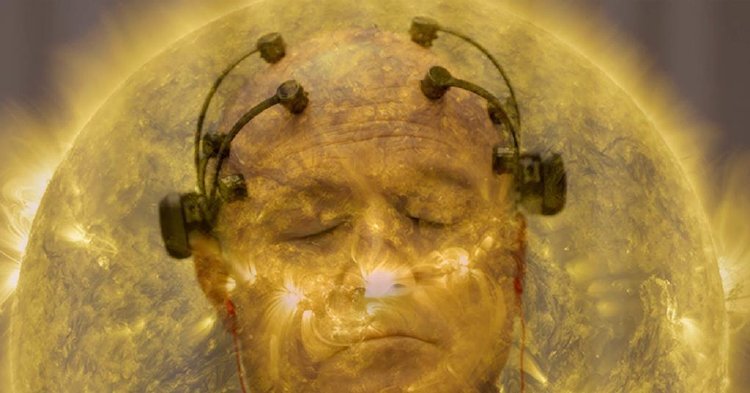 After pointing out the irony that the optic nerve, which transfers information from the eye to the brain, creates a blind spot in the eye which the brain must fill in, writer/director Theo Anthony (“Rat Film”) takes an essayistic approach to the documentary form. Comparing weapons to cameras and the fallibilities of both cameras and the human eye, Anthony deploys both Axon spokesman Steve Tuttle and narrator Keaver Brenai as guides in his fascinating consideration of police body cams which are less than “All Light, Everywhere.”

This mind boggling documentary accomplishes the feat of criticizing the very media it delivers its ideas with as it leads us to question the incontrovertible truth of police body cam footage.  Anthony may dart off here and there with fascinating tidbits throughout his film, but they all support his larger thesis.  By its midpoint, all I could think of was the Jean-Luc Godard quote, ‘Film is truth at 24 frames a second and every cut is a lie,’ as well as Errol Morris’s contemplations on photography and propaganda.  Morris has already come to a conclusion Anthony posits here, that all photographs are posed and what is left outside the frame colors what is inside of it – as long as you know it is there.

Anthony takes many intriguing paths into such subjects as drone surveillance, a form of ‘live Google Earth,’ we are told, and how still photography morphed into moving pictures based on the design of the Gatling gun.  There is a foray into how pigeons were used to mount spy cameras.  We learn about the evolution of the mug shot.  We  hear about evidence.com, where policing body cam footage is uploaded and where officers may review it before making a statement, in essence allowing them to retrofit a justification for use of force.

As we tour Axon’s facilities, where most policing tasers and body cams are manufactured, Tuttle smoothly assures us that the building’s open plan allows for ‘truth,’ yet also notes the ‘black box’ where new ideas may be hashed out in secret.  He explains why cameras may not be upgraded with such features as infrared, which would provide clearer evidence, but not ape the human eye – courts must see as the police officer did.  And yet wide angle lenses are used to capture more data even as they exaggerate movement and make subjects appear closer than they are in reality.  Perhaps Anthony’s most challenging thought is this – body cams are designed to show what happened TO the police officer, not what the officer DID.

The film’s coda could be seen as a filmmaking indulgence, Anthony informing us that the Frederick Douglas School film production class he documented was originally going to provide the through line for this work before he cut it all out.  As we watch these students, one discusses the need to find something to draw one’s intended audience in.  “All Light, Everywhere” should captivate anyone who gives it a chance.

I found out, watching the first few minutes of Theo Anthony’s unique look at the subject of police body cameras, that the optic nerve in the back of the eye actually creates a blind spot in the center of vision that the brain fills in. This bit of information segues into the controversial subject of the moral necessity for those aforementioned body cams in “All Light, Everywhere.”

A good part of “All Light, Everywhere” is a commercial for Axon Enterprise, Inc., the maker of the infamous TASER and the provider for 85% of the police body cameras used across the US. CEO Rick Smith takes us for a guided tour of the company and we see production and testing of the cams and TASERS (named after the 1911 story, Tom Swift and His Electric Rifle, for a bit of trivia.)

The film uses such terms as “solar parallax” and “the black drop effect” and briefly explains the phenomena (not that my tiny brain got it). But, it is mostly about Axon Inc. and police training for the use, care and feeding of the cams by Baltimore cops in the street. The body language from the cops getting trained seemed to range from bored to skeptical to hostile toward the intrusion.

Theo Anthony covers a lot of ground in providing a balanced look at how the cameras are a way to make law enforcement equitable to all. This means that the cameras should be an all seeing eye – which are accepted by the US courts – to protect both the people and the police. The nuance of what the cameras see – and do not see – makes for even more controversy and discussion. We will see, but I am hopeful.

Neon's Super Ltd releases "All Light, Everywhere" in theaters on 6/4/21.