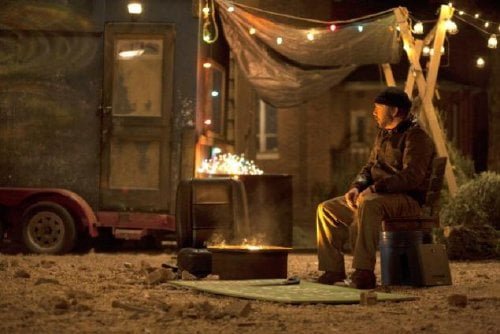 Dennis (Paul Giamatti) is out of prison on parole after serving four and a half years. He hitchhikes his way back to the home of his now estranged wife and daughter, but Therese (Amy Landecker) turns him away. Years before, he promised to buy his daughter a piano and still wants to make good on the promise. He teams up with his old buddy, Rene (Paul Rudd), on a get rich quick scheme to haul a load of Christmas trees from Canada to sell in New York City in “All Is Bright.”

Just out of a Quebec prison, Dennis (Paul Giamatti) is determined to go straight for his family, but he's confronted with nothing but disappointment and obstacles. His wife Therese (Amy Landecker, "A Serious Man") has given up on him, telling their daughter Michi (Tatyana Richaud) he is dead. His cluelessly cheerful parole officer tells him there are no jobs to be had and his best friend and former partner in crime Rene (Paul Rudd), the man who's absence on their last job cost Dennis his freedom, has been seeing his wife. But Rene has successfully gone straight as a trucker and when Dennis hears he'll be hauling Christmas trees to New York City he demands to be let in on the job in "All Is Bright." It's been eight long years since director Phil Morrison's last theatrical feature, the regional American masterpiece "Junebug," so it was exciting news to hear of his return. But while his latest also features familial upheaval and layers of regional and character undercurrents, it doesn't hold a candle to his last. "All Is Bright" is an offbeat, melancholy Christmas story with raggedy edges. Giamatti and Rudd are opposites, of course, the first Paul a dour pessimist, the latter a chatty optimist. Dennis is apoplectic when he sees Rene's Brooklyn site - a triangular lot full of garbage. After the lot is cleared and their bare-bones display is set up, along comes their second obstacle, a cheery, musical Vermont tree outlet across the street. Dennis uses his thuggery to clear them out. Sales are lousy (and you can blame the pitchmen) until, with Rene gone, Dennis is shocked to not only sell a tree to Russian emigre Olga (Sally Hawkins, "Blue Jasmine"), but to be schooled that his asking price is about 10% what it should be. When he delivers the tree later that night, he gets another surprise, the kind-hearted Olga having allowed him to sleep off his exhaustion until morning. Dennis keeps struggling, though, especially when he learns that Rene intends to marry Therese. Even when he's accepted that and sales have finally turned in their favor, another disaster looms in the form of a customer who is not at all what he seems. And there's the crux of the matter - in attempting to go straight, is Dennis changing something essential about his character? "All Is Bright" finds a unique solution towards a Christmas miracle, even if it doesn't leave all its characters contented. Those expecting a traditional happy ending may be disappointed, but writer Melissa James Gibson stays true to her characters even if it leaves her audience wanting. Morrison's pacing is relaxed, even a bit ramshackle, a device using quick cuts of Dennis's daughter opening her Advent calendar to note the passing days awkward. Giamatti doesn't give us anything we haven't seen from him before, despair being one of his stocks in trade, but we feel Dennis's pain and struggle. Rudd's Rene is another of his likeably clueless losers. Hawkins is lovely as the blunt Russian, whose real identity isn't what it first appears - she's the character one most wishes the filmmakers hadn't left behind, although her final scene is, again, very in keeping with her character. In a small role, Colman Domingo ("Lincoln," "Lee Daniels' The Butler") adds a bit of cheer as street vendor Nzomo, another emigre whom Dennis hires to mind the store while Rene's off on his benders. The film's production is modest but effective. Music consists of jazzy versions of religious Christmas standards. "All Is Bright" is a dark comedy that's not often funny, but this quirky character piece has real heart.

Dennis and Rene make an odd pair of pals as they head from the frozen north to NYC. Rene just so happens to be engaged to Therese and Dennis did not know it until they began their journey. This conflict gathers steam as they try to set up shop on a corner in Brooklyn. They have to face the competitive market of Christmas tree sales in the borough without understanding that market. For instance, Dennis tries to sell a tree to Olga (Sally Hawkins) for $20 but his jaw drops when she tells him it should cost $200. Olga becomes Dennis’s muse for the duration of his stay in the Big Apple Director Phil Morrison’s debut film, “Junebug,” launched the career of Amy Adams into stardom. With “All Is Bright” he relies on his two veteran stars to tell the story (by tyro scribe Melissa James Gibson) of hope and despair as Dennis and Rene toil away in icy New York. It does not have the upbeat note of “Junebug” as the guys have to tough it out in the big city. This brings a series of vignettes as they deal with customers, Dennis meeting Olga, and, of course, the promise. Paul Giamatti and Paul Rudd (both always a pleasure to watch) give yeomen performances as two blue-collar slobs trying to get ahead during hard times. Giamatti does a good job playing hangdog guy down on his luck so his Dennis is a familiar character to us. His is the central character in the film with Paul Rudd as an effective second banana. Sally Hawkins, as always, does a solid job as Olga. “All Is Bright” is straightforward and moves with a steady pace as it builds to its expected conclusion. This is of the “nice” variety of movies and makes for an off beat Christmas movie.