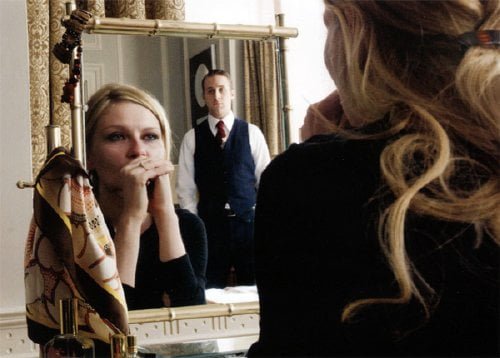 David (Ryan Gosling) and Katie (Kirsten Dunst) fell in love and married, against the wishes of his martinet father (Frank Langella). The couple moves to Vermont to live an idyllic life and run a mom and pop general store. It fails and David and Katie are forced to go back to New York City where must work for his father. This is the catalyst that leads to a mysterious disappearance in “All Good Things.”

David Marks (Ryan Gosling, "The Notebook," "Lars and the Real Girl"), eldest son of a New York City real estate magnate Sanford Marks (Frank Langella, "The Box," "Wall Street: Money Never Sleeps"), was shattered by the suicide of his mother when he was but seven and has never been comfortable around the family business. When he meets blue collar Long Islander Katie (Kirsten Dunst, "Spider-Man," "Marie Antoinette") attending to one a Marks' apartment, he's found his ideal mate, but their ideal life in Vermont begins to crack when dad makes insinuations about Katie's material needs and the young couple begin to descend into a downward spiral when they abandon their health food store, "All Good Things." Director Andrew Jarecki, whose Moviefone was sold to AOL for $400 million in 1999, burst onto the filmmaking scene with his documentary "Capturing the Friedmans," a tale about a family with skeletons hidden in its closet that he unfolded like a mystery thriller. Now, he takes one of New York's most famous unsolved crimes about a family with skeletons in its closet, changes their names, and spins a mystery thriller out of it. One wonders why he didn't stick to the documentary format. Fact is indeed stranger than fiction and once Ryan Gosling begins cross dressing (as his real life counterpart did), one cannot help but be reminded of John Lithgow in "Raising Cain." Jarecki and writers Marcus Hinchey and Marc Smerling link together the mysteries surrounding the strange behavior of Robert Durst with fascinating conjecture based on interviews with former neighbors, Kathie's family and investigators, and while their dissection of a good marriage gone wrong works to a degree, David Marks' psychological motivations remain vague on a number of levels. Gosling's interpretation of his character is to either shut down emotionally or, when his hold over his wife is threatened, overreact, with no real nuance in between. Surprisingly, Dunst, who I would have regarded as the weaker actor of the two, fleshes out her character with a lot more empathy and understanding for why this woman could take so much yet continue to love. The filmmakers concoct David Marks as a man who reluctantly would do his father's bidding and who made bad decisions whenever he thought his wife might be slipping away. Sanford gets his son out of Vermont by suggesting that Katie isn't *really* happy there, and expects more material wealth as the wife of a billionaire's son. She's happy with the fabulous new apartment in Manhattan, but what she really wants is a child, something David denies her, even after she becomes pregnant. When she channels her energy into getting into medical school, David perceives her independence and ambition as a threat. There is an incidence of violence when Katie tells David she does not want to leave her mother's (Marion McCorry, "Salt") home during a family celebration of her college graduation. The filmmakers stay close to the facts of the case (leaving such things out as Durst's propensity for jetting around the world and his second marriage). After Katie responds from a call from David at their lakeside home, she's never seen again except for a couple of random eye witness accounts of her being at the Manhattan apartment the next day. She's never found and David is never a suspect. But two murders occur, one the execution style slaying of David's best friend, Deborah Lehrman (Lily Rabe, "What Just Happened"), the other of an elderly neighbor, Malvern Bump (Philip Baker Hall, "Zodiac"), once David movies to Galveston. The move happened because of a reopening of Katie's case. Lehrman's murder happened one day before she was supposed to provide new evidence and after having received large checks from David. He's only charged on the Bump case (one which the filmmakers beautifully tie into Lehrman's) and gets off, as Durst did, by professing self defense, even though the body was discovered hacked up and thrown into a river. Marks's testimony during the latter trial is used to bookend and connect the film and is taken from transcripts. The film is an awkward combination of tragic love story and tawdry tabloidism, elements which may have, as in the case of "Capturing the Friedmans," worked in conjunction in a non-fiction format. Gosling's transformation into a bewigged, dress wearing murderer goes over the top, inspires the giggles. Dunst creates a loving, tragic character who continues to seek the sweetness in the man she initially met. Also good is TV's 'Parks and Recreation's' Nick Offerman as her supportive brother. As David's brother, though, Michael Esper ("A Beautiful Mind") is but a symbol. Langella has a good moment when confronted by his son regarding his wife's suicide, one that should have opened dialogue but does not, leaving the family back story a question mark. Diane Venora ("Heat") appears in a small role as the D.A. on the disappearance case as does Trini Alvarado ("Little Women," "Little Children") as a sympathetic, watchful neighbor. "All Good Things" can be affecting at times, but mostly it plays as entertaining trash. For an in depth look at the real case, check out Ned Zeman's article in the February 2002 issue of Vanity Fair.

This based-on-true-events story, helmed by sophomore director Andrew Jarecki (“Capturing the Freidmans”) and written by Marcus Hinchey and Marc Smerling, both newcomers to feature screenwriting, is flatly told. Ryan Gosling and Frank Langella give one note performances as the son and father always in conflict. This continues for the length of the film and never varies. Kirsten Dunst, on the other hand, gives her Katie a beautiful arc of character, at first sweet and happy but, as the drama unfolds, becoming increasingly fearful of Mark. Hers is an award nomination worthy performance but the film does not do her justice. The filmmakers utilize newly uncovered court records and facts to expand the time frame to 20 years. The introduction of Mark’s cross dressing at about the three quarters mark simply had me scratching my head and the newly discovered information just confused what could have been a better film. Jarecki would have been wiser to do a documentary of the real life case. Maybe the new facts could have made more sense in that genre. Techs are okay but nothing notable. Andrew Jarecki makes the leap from documentary to feature film and his lack of experience in directing actors shows in “All Good Things.” There may be a talent in development in Jarecki, but this film does not show it.