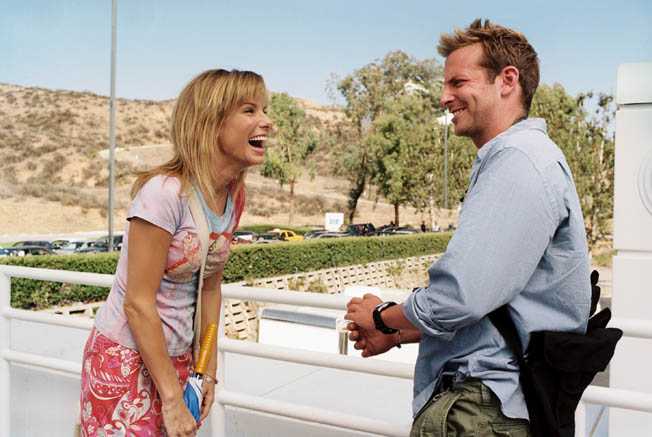 Mary Horowitz (Sandra Bullock, "The Proposal") is a crossword puzzle creator who's not exactly normal. When her mom (Beth Grant, "Little Miss Sunshine," "No Country for Old Men") sets her up on a blind date with a CNN cameraman, Mary thinks she's found the one while he just thinks she's crazy. Unfortunately for him, news reporter Hartman (Thomas Haden Church, "Sideways," "Smart People") enjoys playing games and encourages Mary to be "All About Steve."

In her second outing of the year paired with a hunk du jour a decade her junior, Sandra Bullock is, as always, likable, cute, a good comedienne with a flair for physical goofiness. But as with "The Proposal," what she isn't is a connoisseur of good material. Alarm bells went off on noting that "All About Steve" is the second produced screenplay by "License to Wed" writer Kim Barker and, if anything, this makes "The Proposal" look a whole lot better in retrospect. "All About Steve" begins by establishing that nothing pleases Mary more than seeing people engaged in a crossword. The word nerd, who wears brightly colored short clothing and knee-high red patent leather boots, arrives at the Sacramento newspaper and tries to sell an editor on a daily crossword, but as he vets her work he tells her they're just not big enough. Later, at career day, a group of middle schoolers further burst Mary's bubble because no matter how smart she is, her one puzzle a week has her living with her parents. So, when Mary gets an eyeful of her blind date, she imagines a whole new life for herself and attacks the guy before he can even pull away from the house. He makes up an excuse and vamooses (a word Mary informs us is a lot more fun than 'go') with a story about a story he has to cover. Mary's next published puzzle is titled 'All About Steve' with clues like 'the color of Steve's eyes' and 'the odor in Steve's car' which the city of Sacramento declares is unsolvable. Mary gets fired, but takes this as a sign to follow Steve. Now, why was that crossword even published? We were shown an editor perusing her work, so presumably it was read, but movies like "All About Steve" need to throw logic to the wind in order to work. And so Mary follows Steve on a story about a hostage situation at a Wild West tourist attraction, then to a hospital where separated parents fighting over whether to have their daughter's third leg surgically removed, to a storm in Galveston and to a site where a group of deaf children have fallen into an abandoned mine (which Mary also falls into, on camera, making Steve feel like a heal). Encouraged by Hartman, who uses Mary's babbled bits of trivia in his news reports, Mary just keeps tailing these guys without ever wondering why they don't invite her to ride along in their van. In the end, everybody gets what they wanted, whether they realized it or not, and it all just wraps rather abruptly. Obviously Cooper signed up for this before his stock went up with "The Hangover" and he, like the rest of the cast, can walk away unscathed (except, perhaps, for Bullock, who needs a shot of quality and fast). Haden Church is almost amusing in this, which says a lot about the guy's talent. Ken Jeong who seems to be in every other movie that comes out lately, at least isn't abused as he was in "The Goods." DJ Qualls ("The New Guy," "Hustle & Flow") is cast as a potential romantic rival to Steve, but the filmmakers leave that angle dangling. "All About Steve" is really just a series of episodes strung together, with loud, obvious pop songs braying on the soundtrack. It also features the singular most awful line of dialogue in a movie this year - when Mary responds to an imaginary question as to why she always wears those red boots it is because 'they make my toes feel like ten happy friends on a camping trip.' Say what?